By Hazon on January 17, 2017 in Hazon Seal of Sustainability, Hazon Seal Spotlights 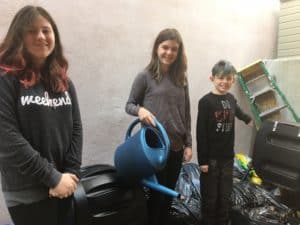 As part of their three Hazon Seal Sustainability projects, Hannah Senesh Community Day School in Brooklyn, NY is expanding their compost program. Notably, they’ve purchased a second composting barrel; this barrel allows students to set one batch of compost aside to decompose, while still being able to add new food scraps to the other barrel.
Though Hannah Senesh has composted for a few years, they previously had no choice but to take breaks from collecting scraps when their single barrel filled up. Their new system allows the school to keep the cycle of composting consistent throughout the school year, keeping food waste from school lunch out of the landfill. It will provide larger amounts of nutrient-rich soil for their educational gardens and tree beds.
Most notably, the composting program at Hannah Senesh is student-run! The students see firsthand the magical process of decomposition in all its messy glory. Middle schoolers are responsible for picking up food scraps after lunch, adding a balanced amount of greens and brown scraps, and turning the barrel. Later, once the compost is ready, they spread it on the school’s gardens, enriching the soil. The students have also created composting signs and educated the community about what goes in the compost. Kol HaKavod — huge congratulations — to Hannah Senesh!
Learn more about the Hazon Seal of Sustainability