Editor’s Note: Welcome to D’varim HaMakom: The JOFEE Fellows Blog! Most weeks throughout the year, you’ll be hearing from the JOFEE Fellows (and staff): reflections on their experiences, successful programs they’ve planned and implemented, gleanings from the field, and connections to the weekly Torah portion or Holidays and what they’ve learned from their experiences with place in their host communities for the year. This one is from me, Yoshi, Director of the JOFEE Fellowship. Views expressed are the mine and do not necessarily represent Hazon. Be sure to check back next week for Zach Goldberg’s post on JOFEE and Yom Kippur!

P.S. Interested in being or hosting a JOFEE Fellow? Applications for cohort two are now open for both prospective fellows and prospective host institutions! 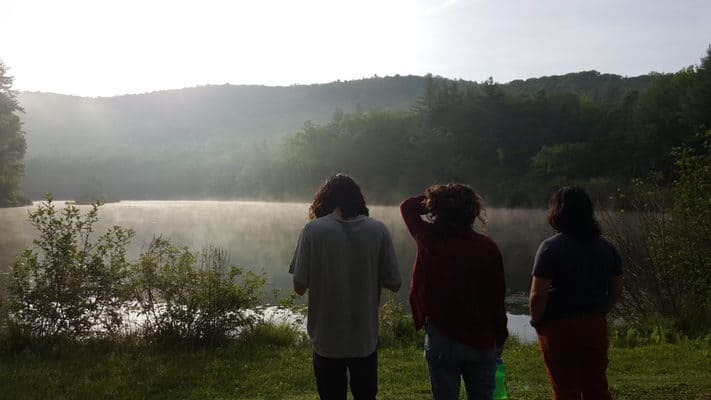 You all know the big one coming up this week: Rosh Hashanah. The Head of the Year, when we begin the High Holiday season full of heart-beatings and introspection, good food, wine, and cheer followed by the Yom Kippur fast. This week is also Parshat Nitzavim – the Torah portion from my Bar Mitzvah.

Much of that weekend is a blur at this point, twenty years later (wow, that just sunk in – twenty years!). One memory that’s crystal clear, though, is my Rabbi’s speech to me on the pulpit, his send-off for me into Jewish adulthood. Reflecting on my decision to formally convert, to become a Jew by Choice in the months leading up to my Bar Mitzvah, he shared with me words from Nitzavim, spoken by Moses to the people Israel: I set before you Life and Death, the Blessing and the Curse. Choose Life, that you and your progeny may live. (Deut. 30:19)

That choice, to choose not only life at large, but a Jewish life, has empowered me in my entire Jewish journey. And in some way it’s at the heart of not only my personal JOFEE journey but the essence of what JOFEE is all about. The outdoors, food, farming, the environment – are these not all intricate elements of living in full relationship with the earth and that which brings the world to life around us? With the relationships we as humans and Jews have with other living things, in all their complexities? And what does it mean to choose life, the blessing – especially when we know that there’s a very direct connection in Jewish tradition to farming and the curse in our expulsion from Gan Eden of having to work the land, to till the soil, to bring forth food only with the sweat of our brow, and the ache of our muscles?

For all the hard work (and farming is hard work – ask any Adamah or Urban Adamah fellow or Farm Apprentice at Pearlstone or Eden Village!) farming is a fundamentally co-creative act, the combined efforts of human effort and intellect alongside the natural processes and ecologies that make growing food possible. Might this mean that with a simple choice, with a shift in our vision, a curse can be transformed into a blessing? After all, what is compost but the re-cycling of nutrients from that which has died into the soil to provide for new life?

At Rosh Hashanah, we begin the journey through Yom Kippur into Sukkot, Shemini Atzeret, and Simchat Torah, and then towards winter and darkness – the rainy season in Israel, the season of snow-covered dormancy in much of North America. Plants retreat, animals dig in and hibernate, the snow muffles, and the bustle of the Sukkot harvest makes way to the quiet meditation of winter. We know – or at least we have faith – that spring will return, flowers will bloom, the harvest will grow again. Life will renew. The world will once again transform itself.

Jewish practice and peoplehood looks very different in 2016 than it did in 1916, very different on the eve of 5777 than the eve of 5677. Many think it’s changed for the worse. I don’t think anyone denies that it’s undergone some radical transformations. The question is: what seeds are stirring under the ground even when things may appear to have grown dormant on the surface? What new fruits are emerging in this new century? JOFEE is one, blooming in new communities all around the US – including and especially those infused with the presence of our 17 amazing JOFEE Fellows tilling and planting the literal and figurative soil. And we don’t shy away from the major issues confronting us – climate change, political uncertainty, social and environmental injustice. Rather, we root ourselves ever more deeply in the Jewish soil that birthed us, and grow ever stronger as the JOFEE ecosystem around us proliferates and diversifies. In the JOFEE world, we strive to create healthier and more sustainable communities for all God’s critters – Jewish and non-Jewish, human and non-human alike. We choose life. For us and for all those to come.

Yoshi Silverstein is Director of the JOFEE Fellowship. He loves every season in its own time, but notes that winter is the only season in which he can go skiing.

P.S. Guess who also read this week’s Torah portion? President Obama, that’s who! The President, amazingly, closed his moving eulogy to Shimon Peres with the same verses of Deuteronomy noted above, and continued: “Uvacharta Bachayim. Choose life. For Shimon, let us choose life, as he always did. Let us make his work our own. May God bless his memory. And may God bless this country, and this world, that he loved so dearly.“