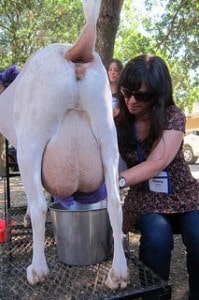 When 2012 was coming to a close, the government was in the process of making series decisions about whether to jump off the fiscal cliff or turn around and climb down.One of the central tenets of this challenge is, of course, food. The 2008 Farm Bill expired at the end of September 2012, and a new one has not yet been set in place, which could cause reversion to a 1949, Farm Bill, which was the last time long-term legislation was passed. The cost of not extending parts of the 2008 Farm Bill or passing a new one for 2013, is that milk was said to sky rocket to approximately $7 per gallon from the average $3.65 per gallon it costs now.

In 2012, the Democrat-controlled Senate drafted a version of a new Farm Bill for 2013, which the Republican-controlled House rejected followed by a failure to come up with their own version. With time running out and the threat of sky-rocketing dairy prices, Senate voted on January 1 to extend parts of the 2008 farm bill through September 2013, to keep the cost of dairy down. Parts of the Farm Bill regarding organic and sustainable agriculture, were left of out the bill. Of course, this is only a band-aid, and is particularly disappointing to farmers who were hoping for long-term change. The extension of the 2008 Farm Bill will give the government 9 months to work on creating a new 5-year plan.

For the most up-to-date information on the Farm Bill, continue reading: