In the same vein that Moshe blessed the tribes of Israel in their own ways at the end of his journey and the next step of theirs, I bless each of us that we lean into our natural strengths and come together to produce something that flourishes that could not have come into the world in any other time but this Shmita year.

V’Zot HaBracha is the final parsha of the Torah, and it includes the last blessings that Moshe gave to each of the Israelite tribes in his final words before his death. This parsha is traditionally read on Simḥat Torah just before the beginning of Bereishit (the first Torah portion) is read, we’re at this odd ending-and-beginning moment in time.

As the ending of the year 5781 and the beginning of 5782 seem to get kind of blurred during the month of Tishrei, we are reminded that the Jewish calendar truly is cyclical. The month of Tishrei has the official new year of Rosh Hashanah and the repentance time of Yom Kippur, but actual transformation during that time is facilitated by having the month of Elul before it dedicated to reflecting and transforming. Elul, however, succeeds the month of Av where we celebrate love after commemorating the destruction of the ancient Temples, which opens up our feelings and senses of connection to each other and Jewish collective memory. We could keep playing the calendar backward until we reach Rosh Hashanah of last fall, and the ebbs and flows of the calendar will all be intertwined. There aren’t always clear boundaries between the past and the future, sometimes there is only the present that feels neither here nor there, and that is part of the beauty of living with the Jewish flow of time.

The holy day season of this year feels different than it did last year, though. This year, we’re not just heading into a new year, it’s a Shmita year! The Shmita year is all about releasing, transforming, sanctifying, and sharing, and changing how we are thinking about our past, present, and future. Traditionally and in ancient times, the Shmita year has been deeply rooted in letting the land lay unworked, and that means that people have to rely on their past harvests, their neighbors, and their faith in Divinity to make it through the seventh year (and the first year!). As we’re feeling the wrap-up of the year in the text of the Torah and the flow of the Jewish calendar, we can look back to see what from the past year or so can sustain us and how we can conserve our resources. We can lean on those around us to help us make it through the year intentionally and fruitfully. We can think and act on our current relationship with Divinity, or we can shift it into something more abundant and nourishing. In the same vein that Moshe blessed the tribes of Israel in their own ways at the end of his journey and the next step of theirs, I bless each of us that we lean into our natural strengths and come together to produce something that flourishes that could not have come into the world in any other time but this Shmita year. 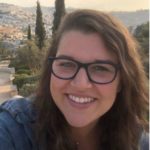 Elyssa Hurwitz is an experiential Jewish educator, who is currently an iFellow and finishing up her Master’s Degree at the Jewish Theological Seminary of America after spending the last two years at the Pardes Institute of Jewish Studies in their Experiential Educators Program. When Hurwitz isn’t teaching 5th graders Judaic studies, high schoolers Hebrew, or creating curriculum for various Jewish organizations, she likes to read Jewish texts like the parashah of the week and cook yummy foods. Check out her Jewish Instagram with experiential holiday and parashah content, and her blog with musings on the parashah of the week (and soon-to-be thoughts and questions during the upcoming 929 cycle)!