In a recent candle dipping program my co-worker Michal and I ran we led a discussion about the truth we want to bring forward during Hanukkah and the darkness of Winter.  Light is part of many Jewish rituals including Shabbat, Havdallah and Hannukah. Our Jewish tradition teaches that the ner tamid, an eternal flame, represents the divine, and the mysterious. One of the things we discussed prior to our program is how truth is often connected to light – revealing something in the darkness that was unseen before. Anyone who has ever played with a prism and watched light turn into a rainbow has seen this light come forward and witnessed a piece of our own divine mystery. 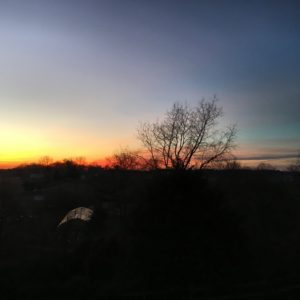 Speaking of rainbows (and truth), this week’s parsha Vayigash is about Joseph long after he has lost his multi colored robe and become indispensable to Pharaoh by interpreting a dream which kept Egypt from famine.  His brothers who once sold him into slavery, because of their father Jacob’s abject favoritism, have unknowingly come to him many times to beg for provisions.  On this trip Jacob’s only other favored son Benjamin joins and Joseph plants a goblet in his bag to see what the brothers will do after they are caught by palace guards.  To Joseph’s surprise Judah, the same brother who sold Joseph into slavery offers himself in Benjamin’s place knowing the loss of his brother would crush their father.  This show of selflessness and loyalty opens up a crack of light in Joseph’s heart, he not only reveals himself to his brothers but forgives them as well.

I find that their are many layers of forgiveness in this parsha. Judah forgives his father for favoring 2 of his brothers over himself and his 5 other brothers.  In protecting Benjamin Joseph sees genuine remorse in how Judah treated him.  Joseph forgives Judah and his brothers by allowing the truth to come forward. 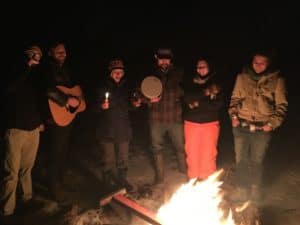 Standing around a fire at Pearlstone Retreat Center

One of the things I have learned while being a program educator at the Pearlstone center and also through the JOFEE Beetles training is how to inspire others through questions that reveal the truth using tools of investigation, discussion and hands on experiences.  Joseph did not reveal himself to Judah immediately, he waited until he was ready to forgive him. When and how we relay truth shapes how others learn.  A truth that may seem obvious to some like climate change, is one that is still contentious to many.  Truth like light is shaped by our perception and what it touches .  During this time of darkness, seasonally, ecologically and politically, for many, The light of truth will shine through even brighter with an openness to discuss difficult subjects and forgiveness in our hearts.

Mira Menyuk studied at the New England school of Photography in Boston before being bitten by the farming bug.  She was an Urban Adamah fellow in the spring of 2013 before returning to her home state, Maryland, to work at the Pearlstone Center. She is entering her third year there and working as a JOFFEE fellow. Her Passions include being outdoors in all weather, hiking, singing, reading and cat petting.  She is excited to be a part of this inaugural fellowship, and to continue connecting, learning and teaching with the wonderful JOFFEE community.