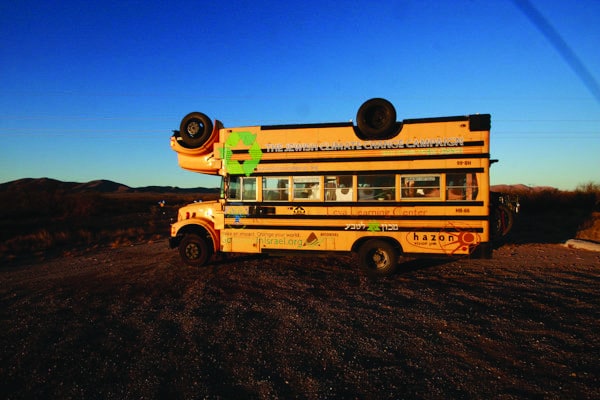 Hazon’s mobile educational spectacle is traveling from Denver to Connecticut while teaching communities how to rethink cycles of food, energy, and time.

If you happen to be on the road this summer anywhere between Colorado and Connecticut, you might be lucky enough to catch a glimpse of a golden-orange school bus traveling upside down along the highway. You’re not seeing things. The Topsy Turvy Bus (so named in honor of the donation fromBen Cohen of Ben & Jerry’s Ice Cream that made this mobile educational spectacle possible) is indeed real, and will be on a cross-country tour from June 29 – August 4, 2014.

Starting out in Denver, Colorado, with stops in Kansas, Missouri, Illinois, Pennsylvania, New Jersey, New York, and Massachusetts, the Topsy Turvy Bus will travel to Hazon’s Isabella Freedman Jewish Retreat Center in Falls Village, CT, where most Teva programs take place.During the tour, Teva educators will show people around the veggie oil-fueled bus, share their knowledge about all things environmental and Jewish, and engage participants to feel empowered to make change in their everyday lives. This year’s tour is the bus’s fourth expedition, and in preparation for the upcoming Shmita year (beginning this September, on Rosh Hashana 5775),the Topsy Turvy Bus Tour will engage communities across the country in thinking, learning, and teaching about Shmita and the various cycles that govern and impact our lives.

Commonly translated as the ‘Sabbatical Year,’ Shmita literally means ‘release.’ Of biblical origin, this is the final year of a shared calendar cycle, when land is left fallow, debts are forgiven, and a host of other agricultural and economic adjustments are made to ensure the maintenance of an equitable, just, and healthy society. The questions about how Shmita actually worked – if it actually worked – are enormous. The possibilities for social change are thrilling.

The Teva educators on the tour willshare Shmita-inspired concepts of leadership, commitment to change, and the power of the individual – all integrated with Jewish ideas as they relate to time, energy, and the environment

“The kids thought the bus and solar oven were ‘really cool.’ I loved how easily and casually Jewish content was inserted into the environmental message,” said a Jewish education director from a stop on the last tour. “The staff was able to adjust the information and activities to our youngest as well as our oldest kids.They were incredible!”

In 2009, Teva conducted its first bus tour in honor of Birkat HaChama, a little-known Jewish blessing that is recited only once every 28 years when the sun completes the cycle that, according to Jewish tradition,returns it to its position when the world was created.That summer, thebus travelled throughout the Northeast and involved almost 1,500 learners of all ages and backgrounds.The following year, Teva leda cross-country Climate Change Tour, with programs attended by almost 2,000 people nationwide. In 2011, the Topsy Turvy Bus toured the South on a“From Purim to Freedom” Tour that began on Purim and ended with Passover.

Drawing on the success and excitement of the last three bus tours, Hazon is thrilled to be once again using this unique and engaging vehicle to bring Teva’s dynamic experiential Jewish environmental education across the country.“I was thrilled with every aspect of the program!It was very interactive and kept my 8th– and 9th-graders engaged, which is no small feat!” said one participant from a previous tour.

At each stop on the Shmita tour this summer, Teva educators will run programs focused around energy, environmental problem solving, social justice, and Jewish values.Program participants will watch an interactive theater-piece, make smoothies on a bicycle-powered blender, assist worms in turning old food into new soil, and learn first-hand about and on a unique bio-fueled bus.

Teva is a program of Hazon. The word hazon means vision. We work to create a healthier and more sustainable Jewish community, and a healthier and more sustainable world for all. For more information about the Topsy Turvy Bus Tour – and about other Hazon programs such as our community bike rides, events happening in Boulder, Denver, San Diego, the San Francisco Bay Area, Philadelphia, New York, and at our Jewish retreat center in the Connecticut Berkshires, our nationwide CSA network, our educational resources, and more – visit us online at hazon.org.