Jewcology is a diverse platform for Jewish environmental activists to learn from each other in order to educate Jewish communities about our responsibility to protect the environment.

Hazon is excited to share these resources with you! We work to create a healthier and more sustainable Israel through our Israel Ride, our Sustainable Food Tour, and Siach (conversation). Learn more about sustainability in the land of Israel using this resource from Jewcology: 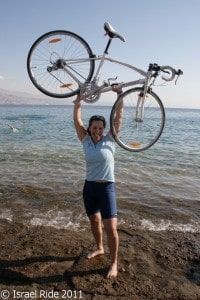 Abraham and Sarah came to Israel over 3700 years ago.  Since then, significant populations of Jews have spent over 1600 years living in the Land of Israel.  For much of this time, Jews have been involved in growing crops, tending fruit trees, and shepherding animals, activities critical to providing food to sustain those living in Israel. Yet they also presented challenges to environmental sustainability in the Land.

How did Jews manage to live in the Land for so long? While the Torah teaches that Divine Providence (in response to the people following the commandments) played the fundamental role, the Oral Tradition as redacted in the Mishna also provides insights.

The time period of the Mishna, before and after the destruction of the Second Temple (20 CE to 200 CE), was a period of increased demand on the natural resources of the Land of Israel. During this time, historians estimate that the Jewish and gentile population expanded to about 2.1 million inhabitants, fed in good part from grain, wine, and oil produced in Israel.

One important feature of this ancient economy was the shepherding of small cattle (goats and sheep).  The Torah often describes the Land of Israel as “a land flowing with milk and honey,” interpreted by the Talmud to mean “milk flows from the goats’ [udders], and honey flows from the dates and the figs” (Tractate Ketubot 111b). Consumption of goat milk was important in Biblical and Mishnaic Israel. Historians note that some herders raised flocks of sheep and goats in great numbers.

Yet goats and sheep are voracious herbivores.  The rabbis in the times of the Mishna witnessed the impact these animals had, entering farmers’ fields and eating agricultural crops. In response to the threat to crops posed by goats and sheep in the Land of Israel, the rabbis prohibited raising goats and sheep in agriculturally-productive parts of Israel (Mishna Bava Kama 7:7).  Clearly, the problem was widespread and understood as causing significant damage, leading the sages to place severe limitations to protect crops and the land. According to Rashi (France, 1040-1105 C.E.), this was done to ensure the fulfillment of the mitzvah of settling the Land of Israel (yishuv Eretz Yisrael).

This decree presents an ancient Jewish approach to environmental sustainability—living in a way that does not unduly deplete the natural resource base on which we depend. Informed by an understanding of the impacts of sheep and goats, the rabbis of the Mishna legislated a responsible path which would sustain the Land for the long-term, even when their choices seemed contrary to short-term motivations like benefiting from goat’s milk and sheep’s wool.

In Israel today, it is not goats but water scarcity that presents a sustainability challenge. The current population is likely about five times larger than it was at its peak before the Temple was destroyed. The state of Israel struggles with ensuring water access to ten million inhabitants west of the Jordan River. Per capita water consumption has also multiplied, due to the ease and cheapness of piped-water.

The ancient wisdom of our tradition can provide some clues to help us find ways to sustain ourselves on the Land.  The rabbinic decree concerning sheep and goats addressed a sustainability problem by restricting one aspect of resource use in order to ensure long-term needs.  Several ongoing projects seem to build upon this ancient wisdom and apply it to today.  For example, one innovative, experimental project underway in Jerusalem seeks to purify and recycle waste-water from mikvehs (ritual baths) for use in irrigation. The project may be expanded to recycle water from sinks and washing machines. Such reuse of water may be one way to encourage more wise use of this precious resource, in Israel and beyond.

As individuals today, we would do well to consider today whether there are areas of our consumption where we could prioritize long-term needs, especially in our choices for using energy, water, food, and consumer products, each major contributors to today’s sustainability challenges.

The Rabbis’ understanding of this decree as linked to yishuv Eretz Yisrael (settlement of the Land of Israel) is striking. It underscores that settling the Land of Israel is not only about the commandment incumbent upon individual Jews, but the greater communal responsibility for settling sustainably. And it is not just about settlement of the Land now, but also sustaining it for future generations. We must live on the earth in a way that lasts for generations by maintaining its natural resource base.

These laws, in providing us clues as to how the Jewish people lived on the Land for so long, underscore the importance of national thinking and planning for sustainability, and elucidate Jewish values which may help us address current and future challenges. May we embrace sustainable living as an act of profound religious significance, and merit to live long on the land.

Rabbi Yonatan Neril founded and directs Jewish Eco Seminars, which engages and educates the Jewish community with Jewish environmental wisdom. He has worked with Canfei Nesharim for the past six years in developing educational resources relating to Judaism and the environment.

These materials are posted as part of Jewcology’s “Year of Jewish Learning on the Environment,” in partnership with Canfei Nesharim.