A version of this originally appeared on Huffington Post 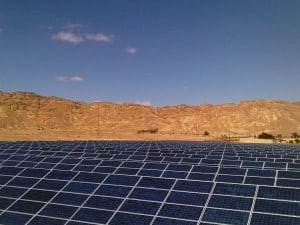 On a lonely gate facing a desolate sun drenched open plain of the Arava Valley one can see a Mezuzah, the small rectangular box with writing from the Bible contained within it. It was put there following the Biblical injunction to place it on “your gates.” (Deut. 6:9) The Arava valley where this gate and mezuzah are found is the same valley used over 100,000 years ago by our earliest human ancestors as an entrance route into Asia as humanity began to spread out of Africa. The migratory nature of the valley continues in our own life time when twice a year half a billion birds fly from Africa to Asia and Europe and six months later return in the opposite direction. And few miles south of the fence and the mezuzah is the oasis of Yotvata mentioned twice in the Bible as a location where Moses and the Children of Israel encamped on their own journey from Africa to Asia.

This is not any gate of a fence, or your average mezuzah. The fence, just south of Kibbutz Ketura on the Israeli-Jordanian border, surrounds the first commercial solar field in the history of Israel and the mezuzah is the first mezuzah in the world that is also a sun dial. So how did the fence and mezuzah get there? In 1996 I was awarded a sabbatical from the Israel Congregation in Manchester Center, Vermont and found myself a member of the founding faculty of the Arava Institute for Environmental Studies located on Kibbutz Ketura.  The Arava Institute is the premier environmental teaching and research program in the Middle East, preparing future Arab and Jewish leaders to cooperatively solve the region’s environmental challenges. Since then my family and I have divided our time between Vermont and the Institute in Israel.

On one of our long periods on Ketura we overlapped with Yossi Abramowitz and his family who had just moved to Israel from Boston.  Yossi, a well known Jewish activist, educator, and innovator, came to the Arava desert with an idea to do something with the sun. One day Yossi approached me and said, “Michael, what the world needs is solar powered air conditioners.” I replied “That’s a great idea, but try thinking bigger.  Look across the Arava road, we need to fill those empty agricultural fields of the Kibbutz, as well as the entire Arava valley, with solar panels. It is time to take solar panel technology out of the testing lab and mainstream it. We need to move from thinking and testing, to doing.”

With that very short conversation the Arava Power Company was born.  Yossi did some initial work and discovered that epicenter of some of the highest solar radiation in the world is in the Arava valley. I then introduced to him to Ed Hofland, the kibbutz member in charge of business development, and we got the backing of the kibbutz to start the project.  David Rosenblatt, from the financial world was brought on board as vice-chairman, Ed became the Chairman, and Yossi, APC’s President. The three of them then began a five year journey, including a $15 million investment by Siemens along the way, which culminated last month with the dedication of the Solar field.

As mentioned above the mezuzah is not only on the gate of the first commercial solar field in Israel, with the goal that 10% of Israel’s electric needs will be met by solar energy, but the mezuzah is also a sun dial. The mezuzah was designed by Danny Lavie with the added feature of the sun dial to not only show us the time, but to remind us about time; as he said, “A great issue in all philosophical debates.” Unlike sun dials that are horizontal those that are vertical are more complicated to adjust to the correct meridians and altitude angles. This one was designed for its specific location. The box of the mezuzah is made of special concrete and the dial hand, which sits in a concave round indentation, is made out of aluminum. There is also another small arm on the face of the mezuzah that is adjusted to face north.

At the placement and dedication ceremony of the Mezuzah on the gate I was joined by members of the Israeli Knesset Dr. Einat Wilf, Uzi Landau, and Orit Noked. There I talked about the parchment inside the Mezuzah which contains the Sh’ma and the paragraph that follows it, as well as a second paragraph also found in the Torah.  About the Sh’ma I quoted a very interesting commentary by Rabbi Yonatan Sax (the Chief Rabbi of England), who wrote, “I have translated it (the Sh’ma) here as “Listen” rather than the traditional “Hear” because listening is active, hearing is passive.”

I continued, “The intent here is that we must actively listen. Listen to what? The answer is found on the second paragraph in the Mezuzah, ‘And if you truly listen to my bidding, as I bid you now…then I will give you rain upon your land in its appointed time, the early rain, yoreh, and the later rain, malkosh.‘ From this we learn something extremely important – there is a relationship between the doings of humans and the health of the environment, our home. We now need to listen to the cry of the earth calling for help. So what are we to do? Solar energy is one solution, and a very important one. The Mezuzah of this field serves to remind us that we need to fix the world. The work of these solar panels is sacred work.”

Rabbi Michael M. Cohen is the author of Einstein’s Rabbi: A Tale of Science and the Soul. He is also the Rabbi Emeritus of the Israel Congregation in Manchester Center, Vermont. He was the first permanent rabbi in the Congregation’s history. A long time environmental activist, he co-founded the first recycling center in Ewing, N.J., in 1976 while in high school. He served as President of the Reconstructionist Rabbinical Association and co-founded the Green Zionist Alliance. Since 1996 he has divided his time between Vermont and Arava Institute for Environmental Studies Kibbutz Ketura campus.