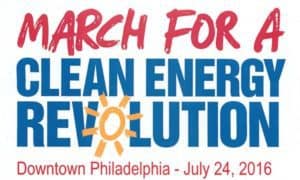 Tiptoeing into the world of environmentalism over the past ten years, I’ve certainly taken my time.

In high school, around the time An Inconvenient Truth began making waves, my brother developed a deep-seated interest in the environment. Some of his enthusiasm rubbed off on me, but mostly I thought it was, well, cute. A nice thing to care about, but requiring too much thought and effort. My brother’s environmentally-motivated vegetarianism earned my respect but did little to change my reluctance to engage the issues behind it (or my diet).

Sure, I was ten. But every time environmental issues came up over the next eight years, the same thing happened: momentary respect and care giving way to a shrug (and homework).

Standing where I do today, having attended the People’s Climate March in 2014, and excited to go march for clean energy in Philadelphia this Sunday, it’s almost comical looking back. Now, in college, much of what I study and care about revolves around the environment, food systems, and climate change. I learn and think all the time about how environmental issues intersect with everything: poverty, hunger, race, class, trade, agriculture, law, politics, national security, human rights, education, media, medicine, construction—you name it.

Yet as I learn more and strengthen my understanding of environmental issues, every nuance pushes me toward a rather strange, but simple, conclusion. If there is one word that most captures my environmentalism, it’s the same word that would have described it when I was ten: reluctance.

I find the issues fascinating, but the tasks and sacrifices daunting and the field (and people involved at all ends of every spectrum) endlessly frustrating. This is not an uncommon experience, yet I feel few people would happily label themselves reluctant. I do, though, because for me, caring about the environment—or rather, focusing on it, since I believe most people care about the world around them—means grappling with the contradictions and challenges that populate that caring. And there are a lot of them.

Only recently, and more so in the past month and a half that I have worked at Hazon, have my Judaism and environmentalism began to truly interact. In thinking about the upcoming march, I’ve realized that Judaism sheds light (solar-powered, of course) on my environmental reluctance.

Heck, Judaism is in many ways a religion of reluctance. Jewish tradition tells stories of wrestling with responsibility, as with Jacob wrestling the angel; of reluctance to undertake responsibility, as with the young and lisping Moses; of ambivalence and disagreement, even with God, as with Abraham arguing on behalf of Sodom and Gomorrah. Judaism, right from the beginning, has carried this sort of  inner conflict at the core its teachings, showing that one can be conflicted and still devoted to a cause.

Thinking about this framework that Judaism provides has helped me reconcile the contradictions and realities of fighting for environmental rights. At the same time, my environmental sensibilities—and these past seven weeks at Hazon—have helped my Judaism grow. Hiking and appreciating the thrill of natural beauty have enhanced my sense of wonder about the world, Jewish and otherwise. Learning that Adam’s name comes from Adamah, earth, and the many ways one can interpret that, has been a small but meaningful part of an introduction to Earth-based Judaism that has helped me to realize that my conceptions of Judaism have been anything but comprehensive.

I suppose the same is true of the environment. On both Judaism and my studies, my thoughts and opinions are constantly evolving, and I wrestle with different aspects at different times. So, when I brave the heat at the March for a Clean Energy Revolution this Sunday, I don’t expect my feelings to be simple. But I like it that way.

Josh Kimelman is a summer intern at Hazon.