Although the Ride already a week ago, more riders are sending in their final thoughts and reflections. The following post is by Mel Simon, cross-posted from Mel’s Blog that he kept throughout the ride.

The Ride To Remember

The memories and friendships created on this journey will stay with me forever but it is the memories of all those who brought me here refined and refreshed by the way the sunlight shines in this land with it’s many many colors and landscapes and diverse peoples that I most treasure. A pilgrimage to Israel with so many dedicated and active souls opens the pores of the mind and the body. I am exhausted but thankful. 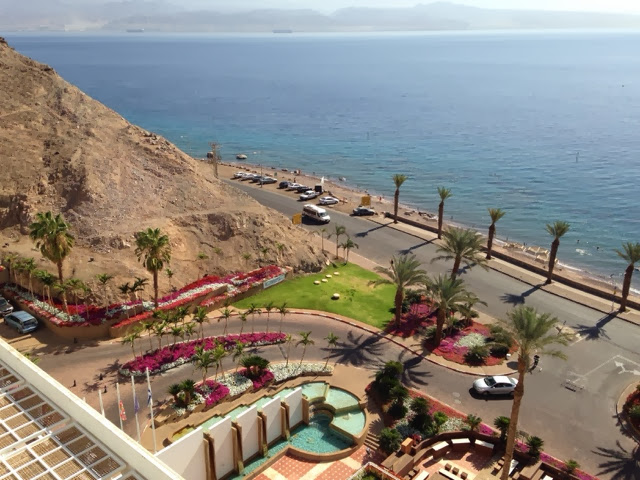 Sitting in Eilat overlooking the Red Sea and the beautiful Jordanain mountains there are many emotions washing over me.  The ride that has now concluded offered exhilarating scenery whether in the Arava valley where the kibbutznicks came in the early days of the State to turn the desert green or in the amazing geological formations of the Negev. We also enjoyed hundreds of miles of spectacular and often very challenging cycling. The people drawn to this ride are a precious part of the experience. Some are very accomplished cyclists and others more casual but all sought challenges to overcome and place high value on the commandment of repairing the world.

To sum up the ride let me start at the finale, an exhilarating descent out of the Eilat Mountains toward the Red Sea. One by one the riders are released to cruise the final five miles under the awesome power of gravity earned over many climbs during the day. No pedaling is required and our speed is modulated only by the brake pressure we choose to apply. For many it’s a chance for a slow scenic finish and for others it’s one last chance to test their riding skills by hurtling through a spectacular mountain pass and downing a large gulp of adrenaline.

After the descent into Eilat all132 riders assemble to ride, together one last time, through the streets of this beautiful coastal oasis. It is a moment to savor the friendships made, the miles covered the challenges overcome and most importantly the great contributions we made to Hazon and the Arava Institute. I reflect on the preceding two days where we journeyed from Mitzpe Ramon into a new week, onto Kibbutz Ketura, the home of the Institute, and back across the Negev to once again skirt the Sinai border. 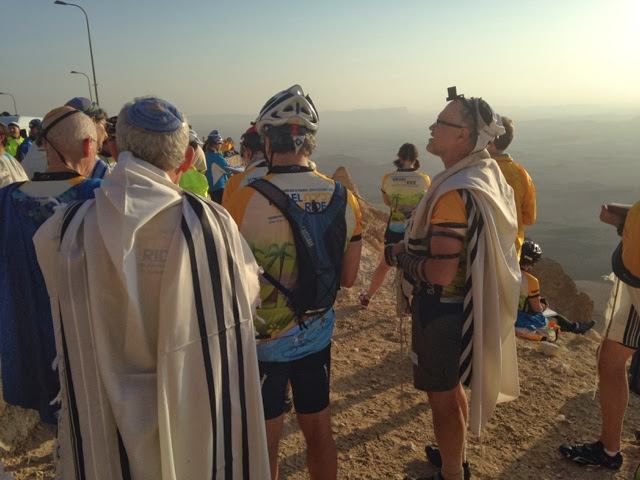 Praised are you, King of the Universe, who enables his creatures to distinguish between night and day.

Sunday began with sunrise, Shacharit and Hallel on the rim of the machtesh.  We experienced the kavanaa of services timed exactly as our ancient ancestors intended in the open air sanctuary of Eretz Yisrael. The assembled were well rested and recharged from the sabbath day. As the sun rose so did our chants of prayer for the coming day.

The day’s ride began with a steep descent into the machtesh with sheer walls to our left and enormous drops to our right. The challenge here was to avoid peering into the very deep and magnificent valley in order to concentrate on the dips and turns of the ribbon of road unfurling beneath our wheels. Once at the bottom of the machtesh the terrain changes into rolling desert with spectacular mountains which were clearly forced out of the desert floor by earthquakes. Much of the peaks are floor like plates thrust upward at 45 degree angles.

There were many difficult climbs but the 77 mile ride concludes with a glorious drop out of the high Negev plateau through a canyon to the floor of the Arava Valley. Once again the hard days work is rewarded with an effortless final three miles but the realization that the next mornings day will start with retracing our path to the valley and a climb up through the canyon is daunting.  As we come through the canyon we spy our first glimpse of the fertile fields of the kibbutzim dotting the Arava desert like postage stamps on a sandpapered landscape. Ketura is but a few miles south and we have arrived at the home of the Arava Institute, the amazing educational program associated with Ben Gurion University, whose mission, in part, is to educate Israelis, Palestinians, Jordanians and others from around the world on the environmental sciences particularly indeginous to this region.

At the Institute we first were lead on tours by the faculty and administrators and then we broke into small groups to meet with the students of the Arava. Our group met with an American woman from Smith College studying for a year abroad, a Palestinian women pursuing graduate studies, an Israeli women in undergraduate studies and an American man engaged in postgrad studies.   The students described the research projects they were involved in which included water purification, cross border migration of plant diseases and air quality concerns. 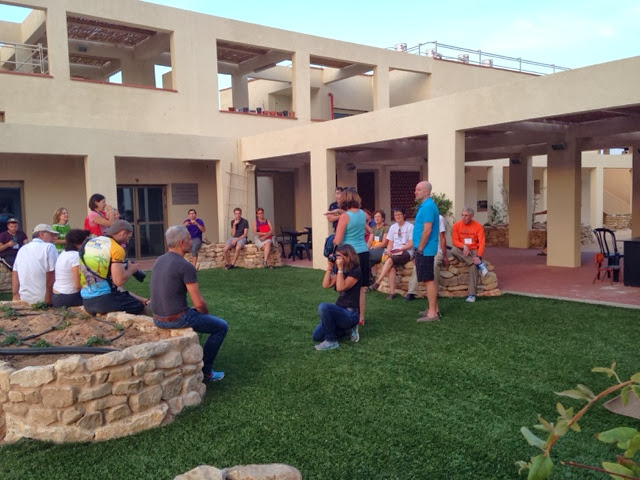 Campus of the Arava Institute

The most interesting aspect of their studies is the three hours a week spent discussing the dual narratives presented by the Israeli Palestinian conflict. This is clearly the most difficult part of the Arava experience where understanding is frequently left unattained but respectful dialog is achievable. The Institute’s hope is that these conversations among young aspiring environmental scientists may provide a foundation for the future conversations which will be necessary to address the common issues on the ground. There is no expectation of conflict resolution on a political scale but a hope that on certain issues the neighbors will some day work together.  To learn more about the Arava’s mission and course of studies please visit their web site.

Monday dawned with a glorious Sunrise bursting over the high Edom Mountains. The red sandstone and granite peaks were home to the biblical Edomites, the descendants of Esau and the final resting place of Aaron the prophet and brother of Moses. The people who live there today are Jordanians by nationality but distinctly diverse, either Hashemites, Bedouins or Palestinians.

The days ride begins with the grueling climb back to the Grofit Plateau a 1000 foot ascent that starts slowly but soon becomes a series of steep traverses at grades exceeding 10 percent. While I have yet to enter the 21st century of Garmin technology my riding companion David is getting sadistic joy from calling out the data his offers. I am mostly praying that my determination will allow my heart and legs to get me to the top.

It is the last day of the ride and I look for inspiration to overcome the pain. I think about the pebble I carry in memory of Michael Kwartler and then drift to his parents and their sorrow and know that I can certainly overcome this mornings challenge for if they can get up each morning who am I to quit now and I make it to the first hairpin. The curves are the flattest part of the climb and I am reenergized. With a burst I begin the second traverse and I reach again for motivation and visualize Jeff Kwartler bounding up the ropes that hung in our high school gym, his strong hands and arms grabbing and lurching to the ring at the top and he got me to the next turn but there is yet another steep straightaway and I think about my mom who passed so young and whose prayers to raise her three boys as Jews were answered by a dedicated father who relied on a spouse, my stepmother, community and congregation to teach his sons the laws and traditions that he never knew and I am carried further up the hill but still have more to climb. I think about my Carrie who blessed this trip and daughters Talia Kira and Danielle who have taken up the charge of repairing the world each in their own way and I am propelled ever further through the pass.

I think about the students we met the previous evening particularly the Palestinians and Jordanians who risk alienation from their families and scorn from their communities to study here and the Israelis and Americans who idealistically hope for an end to the bloodshed and tears Yitzhak Rabin spoke of not far from here in October of 1994 and for which he gave his life and now the sounds of the bongos rhythmically beaten by our crew, the dedicated alum of the Arava, are getting louder. I am nearly at the top and with one last dip into the reservoir built over months and months of training I sprint the last 500 meters tears pouring down my cheeks from the pulsing of my heart,  and the sweat dripping in my eyes, but mostly from the emotions that this tiny country seems to generate in me. 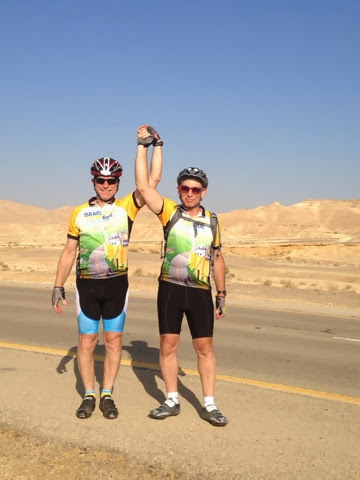 From the crest of the climb we head southeast and cross the breadth of the land and am reminded once again how blessed we are to live in a moment In history when Israel enjoys sovereign  status among the nations of the world. The 2013 Israel Ride is now complete. Through the leadership of Hazon and the Friends of the Arava and it’s many dedicated professional and lay leaders, the Arava alum who supported and cheered us on each day and the 132 riders and countless generous sponsors  together we raised over $500,000 to help educate aspiring environmental scientists and advocates in a manner that will create dialog among people who need each other more than their strident leaders seem to know. I am enriched and inspired by the journey and the mission and so grateful for the team of sponsors, my friends and family, who generously joined me to support this cause. It was certainly a ride to remember.