By Hazon on October 17, 2019 in Food, Food Conference, Recipes, Vegetarian

This recipe comes to us from 2019 Hazon Food Conference Presenter Susan Barocas.

This is the only bumuelos recipe I’ve ever used, dating back over 50 years to growing up in Denver and modified only slightly since then. However, there are many versions online, in books and in people’s kitchens. 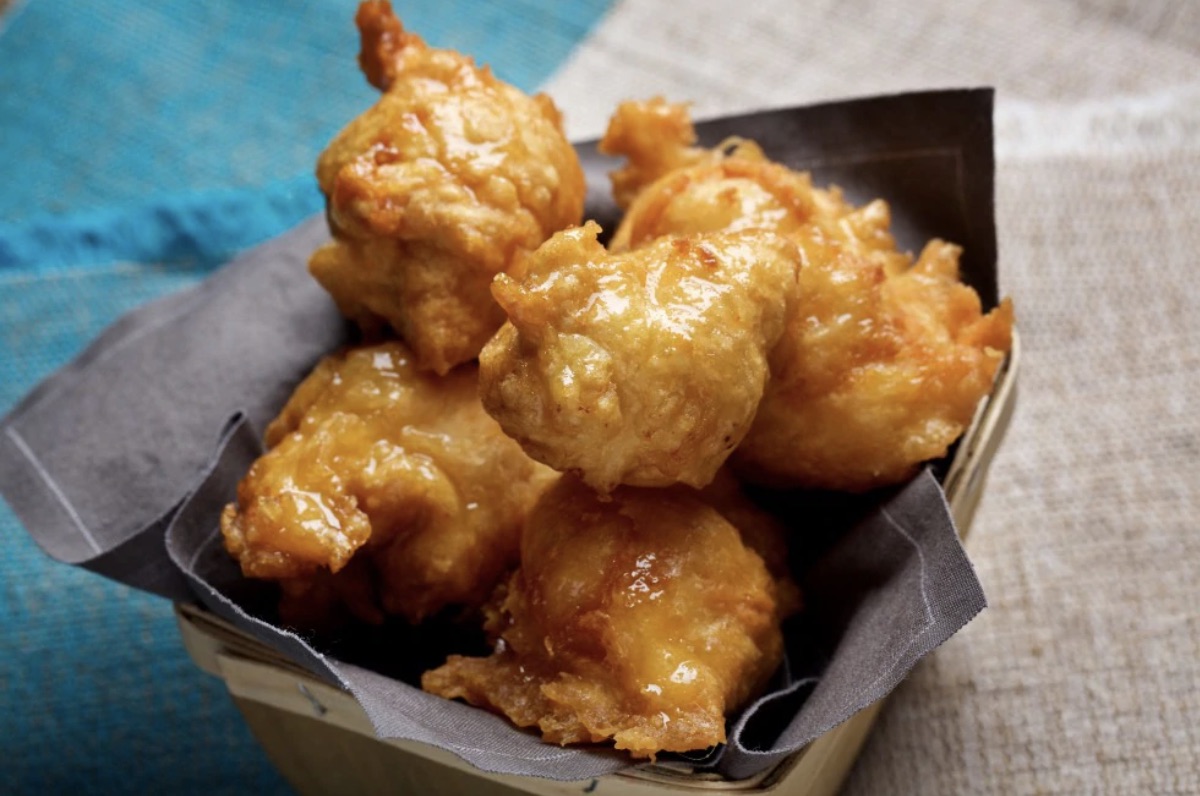 Bumuelos are sometimes called the Sephardic or Turkish beignet, but nearly every cuisine and culture has some version of a deep fried, syrup-soaked, white flour dough perfect for Hanukkah. In Latin America, they are often called buñuelos and in India, jalebi, while in Morocco they are called sfenj. Syrian Jews make zalabieh, Persian Jews zoloobiah and for Iraqi Jews it’s zangoola. Italian Jews serve anise-flavored frittelle di Hanukkah. No matter the name, all are a good excuse to enjoy a sweet fried treat!

To make the dough, dissolve the yeast in 1/3 cup warm water for a few minutes until it starts to bubble. Stir in the beaten egg, salt and oil. Put the flour in a large bowl. Add the liquid mixture all at once and stir (a wooden spoon is best), adding the remaining water gradually to make a sticky, slightly loose dough. Once the dough comes together, cover the bowl with a clean towel or plastic wrap and set aside in a warm place to rise for at least 1 hour or up to 2.

The syrup can be made while the dough rises or ahead of time and warmed when ready to dip the pastries. Stir all the ingredients together in a saucepan over medium heat. Once the sugar dissolves, boil for 5 minutes, then set aside. The syrup can be made ahead and kept in the refrigerator for 7-10 days.

To fry the dough, add 3 to 4 inches of high-smoke point oil to a deep 5 or 6 quart saucepan or a deep fryer. Heat the oil to 365 to 375 degrees. Drop pieces of dough from a tablespoon into the hot oil. Quickly dipping the tablespoon into oil before each scoop of dough will keep it from sticking to the spoon. The bumuelos puff up, so do not crowd more than 3 or 4 at a time in the pan. Cook to a beautiful golden brown, about 2 minutes on the first side, then carefully flip over with a tongs so the other side. When cooked evenly, use the tongs gently to remove each from the oil to drain on paper towels.

To serve immediately, make sure the syrup is hot, then dip the hot bumuelos in the warm syrup and sprinkle with cinnamon if desired. The bumuelos can also be served without dipping first, just pass the hot syrup with the fried dough for people to dip or drizzle themselves. Usually, fried food is served as soon as it is cooked. It is possible, however, to make the bumuelos up to a few hours before serving. Once fried, leave out at room temperature on the paper towels where they drained. About 15 minutes before serving time, preheat the oven to 375 degrees. Set the bumuelos on a rimmed baking sheet not touching and re-heat for 10-12 minutes. They will regain crispiness and be ready for the syrup as above.