I’m back from my mini-sabbatical. My time away included riots in England, the European debt crisis, the Occupy movement, the Palestinian application for statehood, the death of Gaddhafi, the release of Gilad Shalit, and, most recently, Manchester United’s catastrophic home defeat to Manchester City.  In the Jewish world, JDub, The Curriculum Initiative, and Milestones all announced their closure, at least in their current form. This is an unsettling time.

Over the coming weeks I’m going to use these emails to reflect on some of what I’ve been thinking about, as we look back on Hazon’s first dozen years and look forward to the future. For now I want to think about this coming week’s parsha to reflect very straightforwardly (i.e. unromantically and honestly) on how we read the Torah itself. 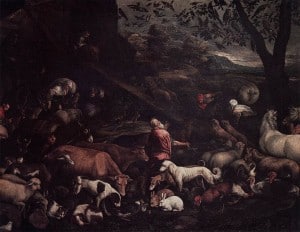 This week is Parshat Noach, which includes the famous story of Noah and the flood. It’s often the occasion for sermons about saving the world. But why is that so, and how do we hear those sermons, and what do they mean? As each year passes, I’m less and less clear about this. In a broad sense it has seemed to me that Parshat Noach has become a time for us to claim, in Jewish language, that we need to reduce, re-use or recycle – or challenge fracking or cut our carbon output, or whatever. I’m in favor of these things too, but I’m not in favor of them because I read Noach each year, nor even because I’m Jewish. I’m alive in the 21st century, I’m soon to be one of 7 billion people on the planet, and I understand that we’re living unsustainably.  I know these things from reading the New York Times and Bill McKibben and Wendell Berry. Parshat Noach adds no new news.

Yet, the way we read the Torah matters, in my view, and it’s precisely because I respect and even revere the Torah that I’m uncomfortable reducing it in simplistic ways. I want to share roughly how I try to read the parsha – this week and other weeks – and what we might gain from it. First: I don’t need the Torah to validate something I believe to be right or wrong in its own terms. I’m persuaded, for instance, that smoking cigarettes is injurious to oneself. Halacha – Jewish law – argues against injuring oneself, but even if it didn’t, I’d still think that smoking cigarettes was wrong.

Secondly: but where then do my values actually come from? That’s a more complex and a more interesting question. I went to a superb shiur -a lesson on a Torah topic – last week, given by Rabbi Mishael Zion, the co-director of the Bronfman Youth Fellowship in Israel. On the day after the release of Gilad Shalit, he was looking at a series of texts on pidyon shivuyim – the redemption of hostages.  Amongst other things, Jewish tradition teaches A. that this is the greatest mitzvah, and B. that one must not redeem a hostage for more than his or her value. How do you square these two notions? That to me is interesting. That, to me, is Torah. That’s why I love Jewish tradition, it explains some of how I’m formed by it, and why we as a people have an enormous contribution we must make to the world.

If there’s a conflict between right and wrong then we of course ought to strive to do right. Maybe we’ll succeed and maybe we won’t, but figuring out what’s right shouldn’t be that complicated.  What’s much harder is figuring out right from right. Or figuring out how on earth we actually do what’s right. The opening prayers of the morning service of shacharit talk about kfiyat yetzer, literally focusing our will. Jewish tradition has a lot to say about that – and I’m really interested in it, because I find focusing my will to be incredibly hard. I’ve known for 10 or 15 years that too much sugar, refined flour, and caffeine makes me tired and distracted and less effective, but knowing this doesn’t always help with kefiyat yetzer – how I might actually consume less sugar or caffeine. Or buy less stuff, or not take a marginal flight.

So when I read Parshat Noach, I do believe that the Torah really is a commentary on the world, and that the world is a commentary on the Torah. And because I believe that, I want to engage those two poles of my existence – the world I live in and the Jewish tradition I’m heir to – with real integrity. Was Noach righteous only in his generation, or was he really a tzadik? Is it better to be ideologically pure (to save yourself, and your family, and a bunch of animals) but let the rest of the world go to hell-and-high water? Should he have tried harder to argue with God, as Avraham did a little while later? What does it mean to be too comfortable? I don’t know. But I do believe that thinking about these things helps me become, in some sense, a better person. This is why Lord Sacks, the English Orthodox Chief Rabbi, argues that the Torah teaches through stories rather than philosophy: the latter is dry and often closed, whereas the former engages us in startling and human ways.

Hazon has played a key role in catalyzing the Jewish Food Movement in the last 7 years. One of the reasons the Jewish Food Movement is so important is because many of our issues in relation to food actually aren’t straightforward, either in principle or in practice. The easy stuff is easy; I don’t need the Jewish Food Movement for that. But how do I really eat healthily and sustainably? For myself and my family, and my community, and for farmers, and for others around the world? How do I learn where food comes from? What’s the relation between tradition and ethics? We’re slowly figuring these things out, and Jewish tradition and the great teachers of our era are all part of it.

I’d add that, whether we like it or not – and sometimes I don’t like it- the Jewish contribution to the world often derives from a broad Jewish sensibility (a broadly Jewish background, a commitment to education and striving to do right, an awareness of the other) rather than an explicitly religious perspective. In different ways Michael Pollan, Dan Barber, and Shai Agassi have been amongst the most influential Jews in the last decade, and Michael and Dan for sure are not religiously observant.

Overall: Who I am, how I see the world, and how I act in it is influenced by being Jewish and by reading the Torah. But not in a simplistic way. Renewing Jewish life means thinking about changes thrown up by Jewish tradition and the world we live in, and starting to address them with integrity. This to me is the message of Parshat Noach – and the Torah more generally in 2011.

This, by the way, is why we’re so excited about our Jewish Food Audit. I’m not interested in telling you, or your community, what kind of food you serve. The Audit raises questions such as How much is local? Do you compost? Do you serve soda at Kiddush? What’s the trade-off between quality and budget? Do you grow any of your own food – is that possible – how could you do that? Which is better, compostables or dishwashable crockery? Is the food you serve integrated with Jewish education in your community, and if not how might it be so?  How does a tradition of kashrut inform key choices we make today? Conversations about these questions are important in their own right and they help transform us and our communities with real respect both for Jewish tradition and for the world we live in today.

Finally, we’re also excited to be named one of North America’s 50 most innovative Jewish nonprofits in the seventh annual edition of the  Slingshot 50. We’re now one of only 8 organizations that have been in each year since inception. We’re also thrilled that so many  of our friends and partners have been included this year – a tremendous piece of recognition for the Jewish Food Movement and our friends.

P.S. Registration is now open for Hazon’s Cross USA Ride, in the summer of 2012. You can do all of it or some of it. If you want a journey that will integrate personal challenge, Jewish tradition, and creating a better world for all, then you’re warmly invited…