By Becky O'Brien, Director, Hazon Boulder on August 3, 2012 in Colorado, Events, From Our Friends

Last Call At the Oasis

All the details are here. 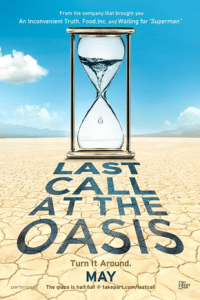 Developed, financed and executive produced by Participant Media, the company responsible for AN INCONVENIENT TRUTH, FOOD, INC. AND WAITING FOR “SUPERMAN”, LAST CALL AT THE OASIS presents a powerful argument for why the global water crisis will be the central issue facing our world this century. Illuminating the vital role water plays in our lives, exposing the defects in the current system and depicting communities already struggling with its ill-effects, the film features activist Erin Brockovich and such distinguished experts as Peter Gleick, Alex Prud’homme, Jay Famiglietti, and Robert Glennon.