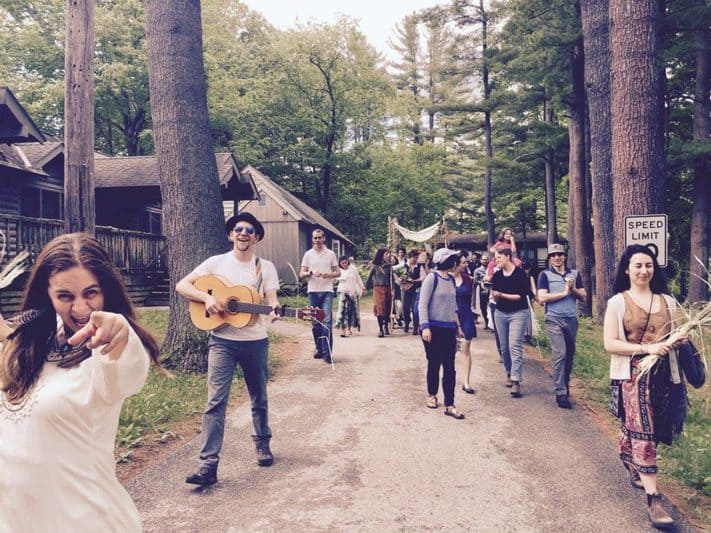 After a very full night of learning, hiking, and singing, the community comes together in celebration for our bikkurim/ first fruits parade | photo: Hazon

I recently recalled to a friend— just after our festival of Shavuot — that I had now been in attendance at the Isabella Freedman Jewish Retreat Center for all three of the Shalosh Regalim, which are the three main pilgrimage festivals. Shavuot, Passover, and Sukkot all took on very different energies at Isabella Freedman. There remained a constant, though: the spirit, joy, and sheer heart that was poured into those festivals by everyone who attended, and by everyone who worked so tirelessly to make those retreat and community gatherings manifest.

An incredible sense of community occurs during Jewish holiday retreats at Isabella Freedman, where I am currently a JOFEE Fellow. After spending the seven weeks of the Omer preparing ourselves, the Jewish people traditionally celebrate the festival of Shavuot to commemorate the receiving of the Torah — the divine energy from God. At Isabella Freedman, we hosted two hundred and fifty people for Shavuot. It was an amazing spectacle of community coming together in revelation. We facilitated all night learning, a bikkurim/ first fruits parade, night hiking, bonfires, singing, and more. Wow! 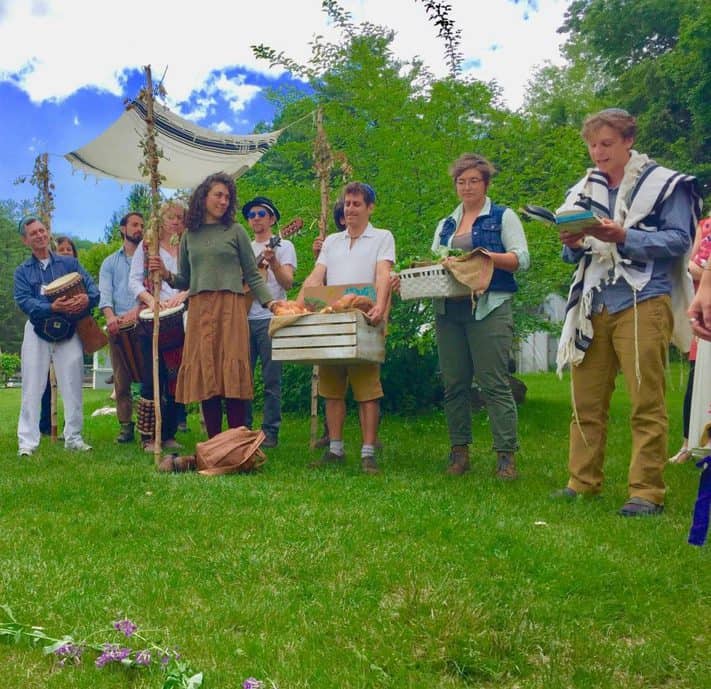 Spring Adamah Fellows bring forth the first yields from the Adamah Farm from this growing season | photo: Hazon

Now that we as Bnei Yisrael  (the children of Yisrael), have collectively received the Torah and concluded the festival of Shavuot, that brings us to this week’s parsha of Beha’alotcha.

Beha’alotcha touches on a multitude of ideas, as Bnei Yisrael is given the laws of Passover, we are commanded to build and kindle the light for the menorah in the temple, we are given instruction to assemble trumpets, and we are also making our way as a nation from Mount Sinai and into the wilderness.

What seems to tie all of those seemingly random instructions together, is that they are all things that lead to the building, strengthening, and assembly of our community. In the opening verses of this week’s portion we are given instruction from God to assemble a menorah for their dwelling place and to kindle that menorah daily:

The fire of the menorah was tended to daily by the priests, and it was made sure that every day it was lit. This is a beautiful metaphorical act that entails maintaining God’s light or burning fire, in a physical form that will emanate from their resting place, outward to the entire community. The priests are kindling and tending to this holy fire everyday, so that it is present and available for the community to tap into.

This important act that is introduced to Bnei Yisrael at the beginning of Beha’alotcha seems to wonderfully tie in to the work that I have been taking part in here at Isabella Freedman. While planning and preparing for the festivals that will bring the Jewish community together here at Isabella Freedman, my fellow colleagues and I like to remind each other, that we are actively tending this holy fire just like the one described in Beha’alotcha. Everyday we are tending to that figurative fire and keeping it going strong, so that when it is time for the next festival, it will be burning and ready for the community to tap into, and ultimately make more powerful.

The next of the physical items that we are instructed to build in Beha’alotcha are the trumpets:  “The Lord spoke to Moses saying: Make yourself two silver trumpets; you shall make them from a beaten form; they shall be used by you to summon the congregation and to announce the departure of the camps. When they blow on them, the entire congregation shall assemble to you, at the entrance of the tent of meeting.” The trumpets acted as a means to mobilize the nation, especially in times of celebration, festival, and also when they were to move into the wilderness. Each time there is a Jewish festival, we here at Isabella Freedman blow those collective trumpets to invite the rest of Bnei Yisrael to come together in celebration as a community. 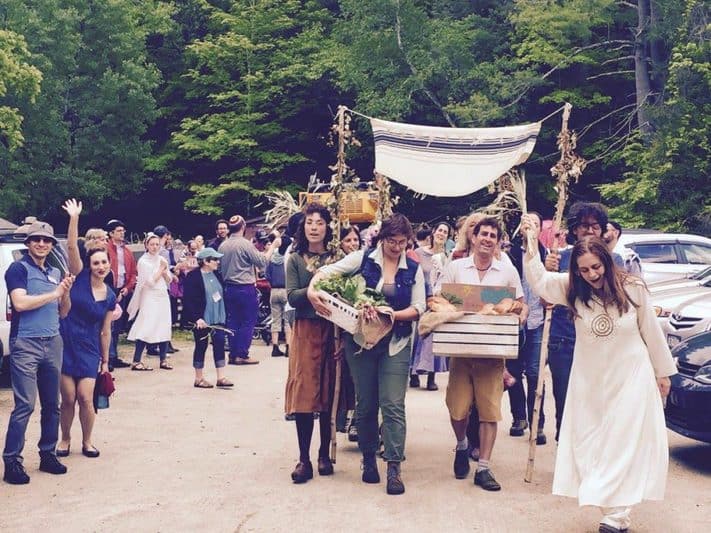 The final corollary that I want to make from this week’s parsha to what occurs here in Falls Village Connecticut, is the act of moving into the wilderness.  In Beha’alotcha we witness Bnei Yisrael taking their first collective steps out into this space of the wilderness. Isabella Freedman very much acts as a wilderness to many, who may be attending from urban or otherwise much more populated areas. People set time to intentionally uproot from their usual communal settings, to come here and experience the wilderness for themselves, in the form of retreat.  Every time prophecy is received in the torah, it is received when a person is alone and out in the wilderness. This is where we as humans are most capable of discovering ourselves, and becoming more aware of the forces that surround us. When out in the wilderness, we can really begin to listen more closely to that divine voice that is constantly present. Just as in this parsha, where we see Bnei Yisrael taking their first steps into the wilderness, so to should we all take the time to make it out into our own personal wilderness, so that we can truly tap into that light that is seeking us, and ultimately do the the work of bringing it back into our communities.

Jacob Weiss returned as a JOFEE Fellow to Isabella Freedman after being part of the summer 2016 Adamah cohort. He has studied permaculture at Hava v’Adam Farm in Israel, received his chef’s training at Natural Gourmet Institute in New York City, and has cooked at restaurants El Rey and Lalo in the city. Read his full bio here.

Cutting our waste – with compostable knives
How to Build a Community in Two Not-So-Easy Steps: A Lesson from Shelach | D’varim HaMakom: The JOFEE Fellows Blog