By Hazon on December 10, 2014 in Cycling, Israel, Israel Rider Blog

Marcy Perlman Tardio rode on the 2014 Arava Institute & Hazon Israel Ride. She is a mother, grandmother, and homebirth midwife living in Brooklyn. This piece was originally published online at Haaretz.com on December 1st, 2014.

Many within my multi-cultural circle of family and friends refused to support my participation in a charity bike ride in Israel, an ‘oppressor’ and ‘colonialist’ state. 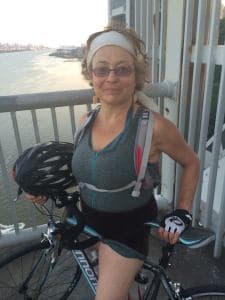 The year following my kidney transplant, over a decade ago, I rode in the Hazon charity bike ride in New York. I rode then to honor my older son, who had gifted me the kidney, and to celebrate my new-found health. Through the organizers I learned of a counterpart ride that took place in Israel; several weeks ago, I returned from the Hazon-Arava bike ride, where I completed 230 miles from Jerusalem to Eilat. Despite the challenges of the heat and the terrain, my most unexpected difficulty had emerged before I even sat in the saddle: Persuading my peers to donate to a charity effort that would take place in Israel.

At the time of my first ride I had joined a synagogue. My younger son already attended Jewish day school. I, the daughter of culturally Jewish, left wing, secular humanists, knew little of Jewish practice, even as my mother’s ancestor, Rabbi Wolf Kitzes, was a holy man within the close circle of the Ba’al Shem Tov, the founder of Hassidism. As a red diaper baby and hippie, I explored yoga and Buddhism, Pentecostal Christianity, Carlebach Judaism, and even Islam. With two biracial sons, the elder of whom was a born-again Christian, I decided to provide a Jewish foundation for my younger son that would, hopefully, carry him through life.

A requisite for the Israel bike ride is for each rider to raise $3600, funds aimed at grantee organizations focused on ecological sustainability and sustainable efforts towards peace. The years between rides had found me drifting from Jewish life, so, unlike many riders, who had strong Jewish ties, I reached out to my multi-cultural circle of friends and family. I did not easily obtain contributions. Many acknowledged that they loved me, but could not offer support as I was going to Israel, the “oppressor,” “colonialist” and proverbial “white man” against the oppressed Palestinians.

Israeli politics concerned me. As a woman who made a life crossing the proverbial and literal boundaries between peoples – ethnically, culturally, racially – my feelings about Israel were personal. My cousins were Israeli. I considered American slavery, how it was so toxic that the grief, anger and pain of the slaves’ lost blood had seeped through future generations. Perhaps the Holocaust had done the same within the collective bloodstream of “my people” that those who saw things in purely political terms could not comprehend.

As I trained I read Ari Shavit’s My Promised Land. In Israel I read my cousin, Rena Gluck’s memoir The Batsheva Dance Company, My Story. Her Israeli story brought a personal theme to Shavit’s more political one. 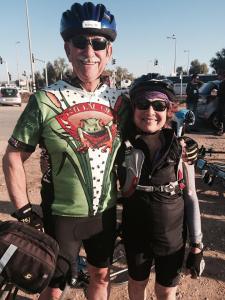 When not well-versed with one’s own history, ancient and contemporary, Israel’s back roads just looked barren. Browns and slate-black colored the terrain I found myself pedaling. We heard anecdotes about days’ past. It was the makeshift tents set up roadside, and the dried figs and dates offered for our nourishment, that reminded me of my people’s past in this ancient terrain.

Both Jews and Arabs were crew for our 163 ‘pilgrims.’ I, the mother of two black men, saw Arab and Jewish cultural divides through ‘Jim Crow’ eyes. It is through these eyes I realized I was often unable to distinguish who was Israeli Jew, and who was Arab. I had traveled to the Holy Land according to my modus operandi: Crossing borders. But when I biked in alone to a Bedouin village, in sleeveless shirt and shorts, Muslim women walking down the street in long colorful dresses and head-scarves, nothing prepared me for how to behave. Should I greet these women? Did I offend them with my less than modest attire?

At the Arava Institute, Jews and Arabs studied, befriended and lived together, their common ground being their land’s shared ecology. We heard stories by Arab and Jew, alike. How it was hard to get to the Arava Institute from the West Bank and Jordan. How an Israeli woman realized she’d never been in a car with an Arab. How inequity between Jew and Arab hit home when her Palestinian friend took eight hours to meet her on a trip that should have taken thirty minutes as a result of the many check points.

I shared apple-scented tobacco in a hookah passed around by Arab students, who sat in their self-imposed “ghetto,” recognized by me from NYC classrooms, where kids sat together based on who they looked like. Jew and Arab, black and white, this is how I saw this land. I posted these organizations’ links on Facebook, asking for support. I managed to reach 84% of my total.

From the ride’s end point I could see Egypt, Jordan, Saudi Arabia; two days later I was in Brooklyn. My friends, family and clients commended my strength and endurance.

On reflection, Israel’s, my people’s story, is not so black and white, good guys/bad guys. There’s nuance in people’s stories, people’s suffering. I met people who worked together for peaceful coexistence. It is the human factor, people listening to each other’s stories, where I place my belief, and that is what biking through Israel confirmed for me. It is just not that simple to translate this to my peers.