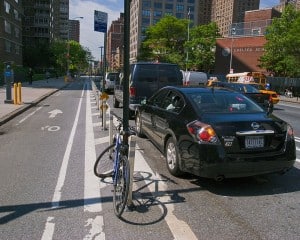 Congratulations to the Upper West Side Community Board on a close 24-19 vote in favor of creating protected bike lanes on Columbus Avenue between 96th-77th street! The auditorium was packed with supporters sporting neon stickers that “Protected Bike Lanes Protect Everyone.” Among the speakers testifying were actor Matthew Modine, and New York Times columnist Randy Cohen, who spoke out in favor of the protected lanes.

About a dozen people from Hazon were at the meeting, including Executive Director, Nigel Savage, who spoke on behalf of the Jewish community. Nigel extolled the social justice and environmental impact such bike lanes would have, not to mention the safety benefits. He spoke of the Jewish community’s interest in civil rights movements of the past, driving home the idea that protected bike lanes are not just a fringe issue but that they would be a positive addition to the Upper West Side (UWS) for all its residents. Additionally, Nigel reminded the board that Hazon has collected over 400 signatures of residents and letters of support from over a dozen kosher businesses and synagogues on the UWS.

The other testimonies of support for these bike lanes were as varied as the attendees.  From stories of injury to cyclists at the hands of traffic to pleas from senior citizens to make the sidewalks free of bikes, the board heard time after time, with few naysayers in-between, that these bike lanes are what the community wants.

The Department of Transportation plan was presented by 3 representatives, including Margaret Forgione, DOT Manhattan Borough Commissioner, who also answered the Board’s concerns.  The DOT has selected the mile long stretch on Columbus Avenue because its width allows for the addition of a bike lane without removing any car lanes.  The configuration of the street lanes as outlined by the plan will include slightly narrower traffic lanes with a “floating parking lane”.  Cars will park next to a striped border with a green bike path between the curb and this striped zone; this will create a buffer between cyclists and motorists.  There will also be pedestrian islands at designated streets to allow pedestrians to wait between the lanes and traffic for the walk signal.  This is a six month year pilot program, after an amendment was passed to shorten it from one year, and upon review of its success, the lanes will ideally be extended both north and south.  Once implementation of the plan begins, completion should only take about a month.  You can see the DOT’s plan at http://www.nyc.gov/html/dot/downloads/pdf/20100511_columbus_ave_cb7.pdf

These bike lanes will join a network of paths throughout the city, including the recent completion of a bike “highway” in Riverside Park.  Those lanes, highly successful and enjoyed by many, stretch continuously from 137th to Battery Park.  There have also been successes with new bike lanes on 9th Avenue and in Chelsea to name a few.  When Ruth Messinger imagined these lanes as borough president 25 years ago, it seemed impossible.  Today, thanks to tireless work by advocates and activists such as organizations like Upper West Side Streets Rennaissance, Transportation Alternatives and Hazon, these lanes will be a reality.

As the city becomes more and more bike accessible, now is the time to come out and enjoy a ride with Hazon.  There are free summer rides, open to all, coming up on June 6th, 13th and 20th to various locations.  June 27th is our annual Bike to the Beach with a variety of route lengths available for all levels of cyclists to Coney Island.  Check out Hazon.org for specific times and destinations.  There will also be rides through July and August, culminating in Hazon’s annual 3 day New York Bike Ride on Labor Day Weekend.  Go to our website to register and join a one of a kind cycling event celebrating New York’s vibrant Jewish community.