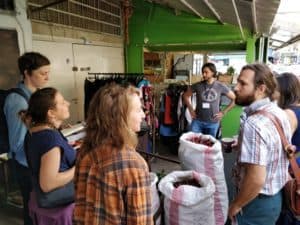 Divorced with three kids and nowhere to go, Sara made the trek north to Afula. When she arrived, the first thing she did was get on a bike, find whatever odds and ends she could get her hands on and sell them at the shuk, the local market. She did this every day for a few years until she was finally able to have a stall of her own.

Today, 35 years later, this impossibly slight woman with an indomitable spirit told us her story, some of us with tears in our eyes.

The Afula Market, or “shuk” in Hebrew, was the heartbeat of this small northern town only a few decades ago. It was utterly vanquished by the neighboring department stores and has since become a hive of underworld activity.

Thankfully, Sivan, an Afula local artist, didn’t see it that way. These dilapidated walls were the ideal canvas for art and the opportunity to empower creative teenagers in Afula. It now boasts a dazzling display of murals, making the shuk burst with life.

We had the privilege to speak with Sivan and her friends Gili and Mor on our first stop after a hearty Israeli breakfast at our hostel in Haifa. Gili, Mor, and their friends from the Tarbut Movement moved to Afula over ten years ago to bring arts and creativity to this decaying community. They met Sivan, born and raised in Afula, who dreamed of being an artist as a young girl. “But,” she told us, “I fed my drawings to the drawer,” never imagining anyone cared.

Gili and Mor cared, and now Sivan is the municipalities official artist.

This is what the modern day urban kibbutz in Israel looks like. Groups of incredibly talented, driven, and disciplined people move to a depressed town and bring it back to life. They live in apartments or housing complexes and lead lives across the spectrum of communal living. 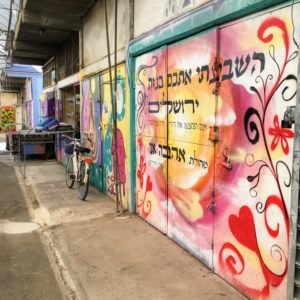 In Kibutz Mish’ol, where our tour guide James lives, there are 30 – 40 families living in an apartment building in Nazareth Ilith. We visited the kibbutz after lining our stomachs with hummus and discovered a world that most of us could hardly imagine existed and are still trying to wrap our American heads around.

Theirs is a highly organized, communal, and completely decentralized existence. Most of them are teachers because the mission of the kibbutz is to invigorate public education. All income is pooled and expenses are covered by the kibbutz with an allowance provided to each family for discretionary spending.

Decisions are made by committees responsible for those aspects of life. When there are differences of opinions – c’mon, this is Israel, the Jewish state we’re talking about – they communicate and dialogue with each other until the issue is sorted out. No hierarchy and no written policies.

These are kibbutz utopias which are integrated into and active contributors to society. A far cry from the isolated and separate existence of the old kibbutz movement.

Later on, in Jerusalem, packed in an elevator with our suitcases in hand, we were still scratching our heads wondering how decisions are executed in such an environment. However, our hearts were uplifted by these shining examples of people who have chosen to live an intentionally communal life in our land of Israel.