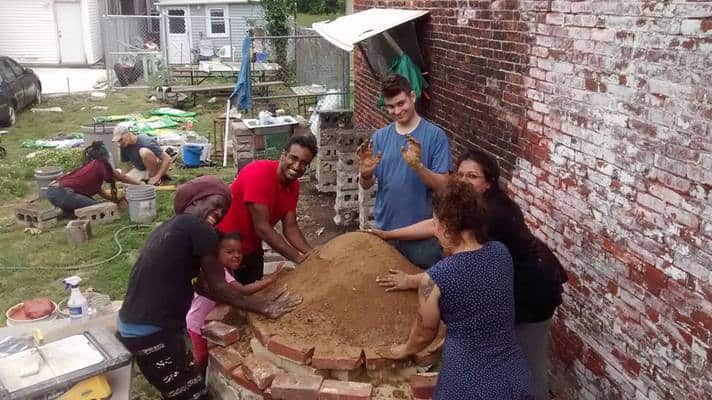 Philly Farm Crew volunteers construct a cob oven at One Art Community Center, a Black-run space for healing, connecting to creativity, and harmonizing with the earth | photo: Bekkah Scharf

In this week’s Parasha, Balak (Numbers 22:2- 25:9), we read a tale about the ways in which kindness and gratitude contribute to justice and G-dliness, and an allegory relating systemic patterns of oppression to land:

King Balak of Moab, a ruler whose name means devastator, empty, or wasting, desperately attempts to curse the Israelites. He despises the Tribe of Jacob so deeply, that he attempts to hire Balaam to damn the Israelites for him:

There is a people that came out of Egypt; it hides the earth from view, and it is settled next to me.
Come then, put a curse upon this people for me, since they are too numerous for me; perhaps I can thus defeat them and drive them out of the land.
For I know that he whom you bless is blessed indeed, and he whom you curse is cursed.

Balaam mounts a literal WISE ass (inciteful female donkey) and sets out on his wicked task. The Divine however, has a different plan. G-d sends an armed angel to disrupt Balaam’s path, and each time the donkey attempts to avoid danger, Balaam fiercely beats her. After the third beating, the donkey lies down, and Balaam sees the armed angel in front of him. 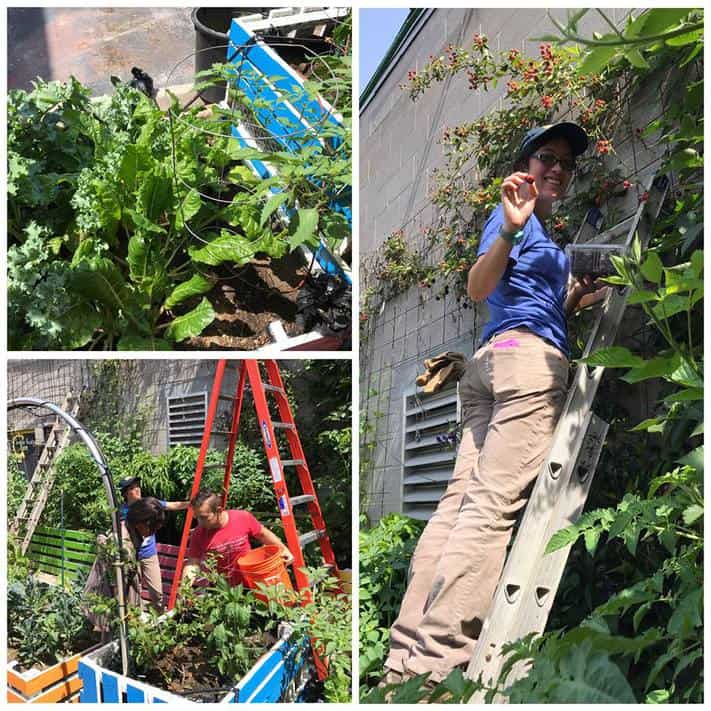 JFS partners with Repair the World Philadelphia to run Philly Farm Crew, a program that coordinates volunteer groups to serve in solidarity with urban farmers. Here’s our Repair Fellow, Rebekkkah Scharf and a few of our volunteers tending the community garden at Sunday Breakfast Rescue Mission, a shelter for men in transition from homelessness | photo: Horace Bradley

The tale carries on from here. In a nutshell, Balaam refuses any bribe Balak offers because he cannot go against the wishes of G-d, who commands that all beings be blessed, not cursed… even enemies.

And then, we have the magic moment. With guidance from The Spirit, Balaam utters the words we now recite as Ma Tovu:

Word of Balaam son of Beor, Word of the man whose eye is true.
Word of him who hears God’s speech, Who beholds visions from the Almighty, Prostrate, but with eyes unveiled:
How fair are your tents, O Jacob, Your dwellings, O Israel!

Like palm-groves that stretch out, Like gardens beside a river, Like aloes planted by the LORD, Like cedars beside the water;
Their boughs drip with moisture, Their roots have abundant water. Their king shall rise above Agag, Their kingdom shall be exalted.
~Numbers 24:3 – 24:7

Balak despises the Israelites because their dwellings interrupt his view. Balak speaks of land as a commodity to hold power over, not a life-giving entity that supports the survival of humanity. 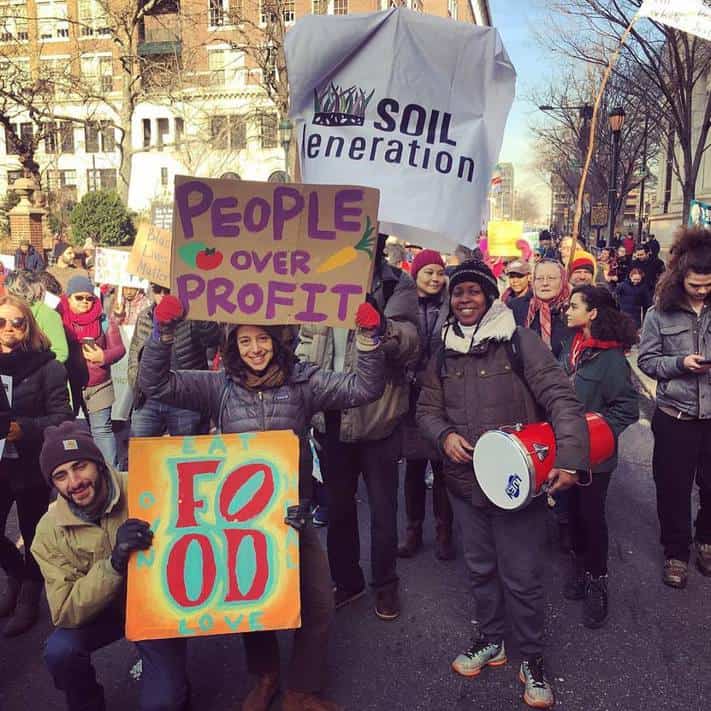 Staff of JFS spend their off hours supporting the organizing work of Soil Generation, a black-led, grassroots coalition of radical community gardeners and urban farmers working to build a hyper-local food system in Philadelphia that promotes health and equity in historically marginalized communities and works toward the creation and preservation of safe, healthy, economically secure and culturally-reflective neighborhoods | photo: Soil Generation

Drawing contemporary links, when I read about Balak, I think about Donald Trump. I think about the ways in which the US capitalist land-grab ethic has waged violence on immigrants and communities of color for centuries. I think about the absence of gratitude and exaltation for both the earth and it’s inhabitants that has become commonplace, in all of society and particularly in state-enforced agricultural, labor, and immigration policy.

Everyday we see people casting huge amounts of blame and hatred towards individuals, most often for reasons rooted in deep seated insecurity.

From Balaam, though, we learn otherwise.

As Jews, farming and otherwise, what would it mean to hold up Balaam’s lesson? To constantly speak truth to power? To always operate from a place of reverence? To constantly listen for guidance and hold space for messengers of all forms? Preaching hate or cursing people, land, or otherwise will never resolve our muckier personal trauma or collective suffering. 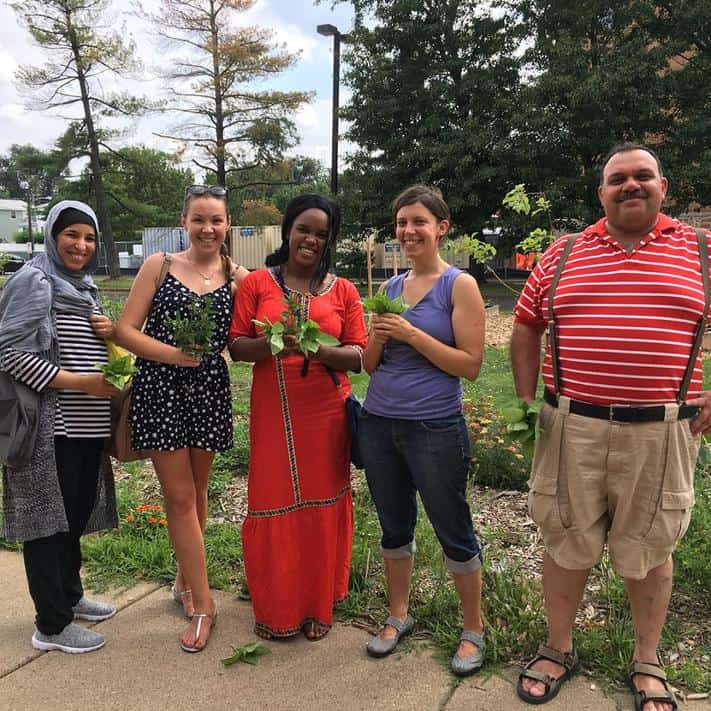 In my role as farmer educator at KleinLife JCC I work with students from the ESOL class of Bustleton Library. At their most recent visit to the garden they rounded out their studies of culinary and medicinal herbs with a sensory story share of plant uses back home. Reppin’ Morocco, Belarus, Congo, Iraq, and the borscht belt of the Catskills- Jewish farming in the 21st century means holding healing space for all diasporas | photo: Hannah Slipakoff

As Program Manager and JOFEE Fellow with Jewish Farm School, I have been thrilled about our organizational efforts to center dismantling oppression and hold up food justice in our Jewish cultural work. We’re creating programming and curricula that reflects the particular ways our Jewish people have been implicated in land-based and social justice histories. From a racial justice oriented Tu’Bshvat Sedar to our staff’s involvement with city and nation-wide organizing, and our upcoming immersion programs we, like Balaam, are constantly discovering new ways to uphold the Divine in the name of Justice and honor for the earth. 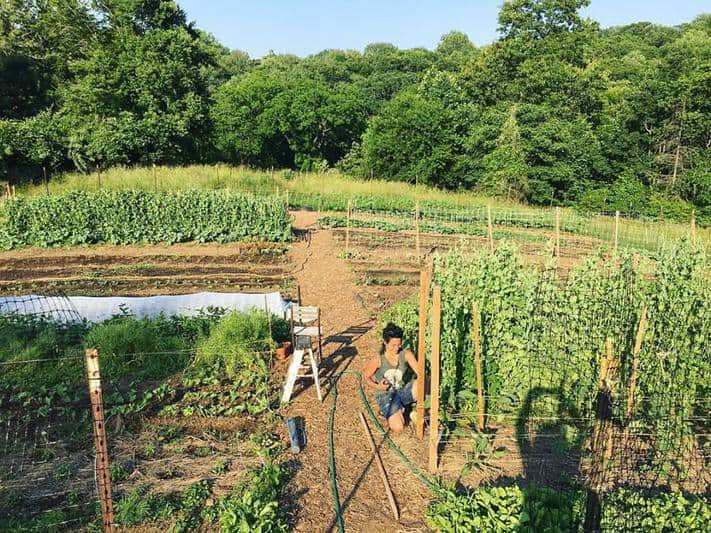 Here’s Hannah in her element… drawing in strength from the sun and radiating gratitude for the land while supporting Heirloom Seedkeeper Owen Taylor at his farm outside of Philadelphia | photo: Owen Taylor

Hannah Slipakoff is Program Manager and JOFEE Fellow at Jewish Farm School in Philadelphia, PA. She is grateful to have experienced learning and working on diverse urban and rural farms over the past ten years; including apprenticing at George Jones Farm in Oberlin, OH, studying at The Center for Agroecology and Community Food Systems at UC Santa Cruz, training participants in The Philadelphia Community Farm Collaborative’s Beginner Farmer Training Program, managing Mort Brooks Memorial Farm for Weaver’s Way Food Co-op, and most recently, co-managing the field and supporting food sovereignty education programs for Soul Fire Farm in Grafton, NY. Read her full bio here.