Hazon works alongside many strong partners across the Jewish world and beyond, and moving forward we are honored to feature our allies as guest writers for our newsletter. To start off this partnership series, Rabbi Jennie Rosenn introduces Dayenu and the critically important role we can all play in fighting for strong climate action now!

After more than 20 years working as a rabbi mobilizing the American Jewish community around issues of social, economic, and racial justice issues, I have come to understand the climate crisis as the existential crisis of our time. And at its core, it is a question of equity and justice – even as climate change affects everyone, historically marginalized communities bear the brunt of its impacts.

We launched Dayenu: A Jewish Call to Action 18 months ago, to help build a multi-generational movement of American Jews confronting the climate crisis with spiritual audacity and bold political action. We mobilize Jewish support for climate solutions, build collective power, and raise up a spiritual, religious, and moral voice in the national and global climate movements.

A growing grassroots network and diverse partner organizations are joining Dayenu campaigns to advance comprehensive climate policy, leverage communal power in key moments, press candidates and elected officials to take bold action, and keep fossil fuels in the ground.  We are also building a spiritually rooted movement that supports Jews to confront the crisis on a spiritual and emotional level, cultivate hope, and move towards courageous action.

Hazon and Pearlstone have long been at the forefront of advancing sustainability, a deep connection to nature, farming, food, and experiential education to help transform Jewish life. Confronting the climate crisis is central to that work.

That’s why we’re excited to be building a powerful Jewish climate movement together with Hazon and Pearlstone, helping to bring Jewish wisdom, tradition, joy, power, and spirit to the work of creating a livable future. And we have no time to lose.

Right now, as climate disasters intensify across the country, Congress is negotiating a sweeping $3.5 trillion economic recovery bill dubbed the Build Back Better plan. The fossil fuel industry is working overtime to strip crucial climate provisions from the bill, but If we raise our voices, this bill could deliver jobs, justice, and game-changing action on climate.

This may be our last, best chance to ensure a just and sustainable future. That’s why earlier this week, Jakir and I joined the #PeopleVsFossilFuels week of action, and were arrested at the White House alongside 150 Indigenous and faith leaders from across the country demanding that our elected leaders take immediate action on climate.

But you don’t have to risk arrest to make your voices heard. You can send a message TODAY to Congress to pass this historic bill, and to ensure that it is as big and bold as science and justice demand.

Call Your Members of Congress to Demand Clean Energy, Good Jobs, and Justice

I hope you’ll join Dayenu, Hazon, and Pearlstone as we work together to educate, transform, and mobilize the people and power of the American Jewish community to meet this existential crisis with spirit, joy, and determination. 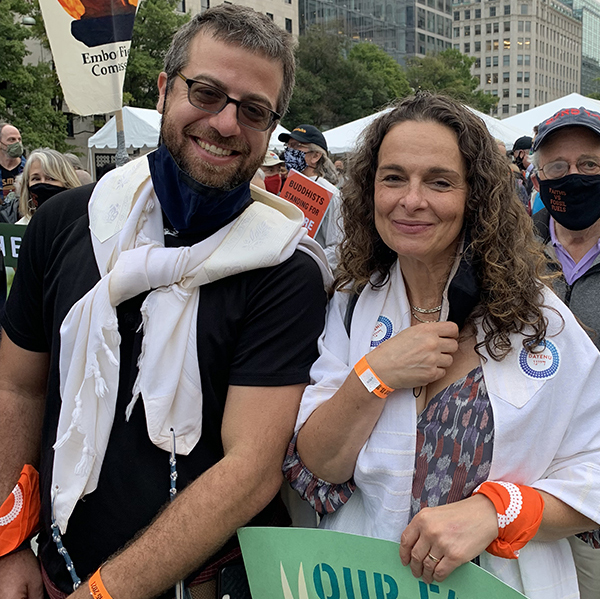 Pictured right: Dayenu Founder-CEO Rabbi Jennie Rosenn (right), and Hazon CEO Jakir Manela marching together to get arrested at the White House on Tuesday, October 13th, as part of a multifaith leaders contingent in the People vs Fossil Fuels campaign.

Lech-Lecha: Treating Both the Land and the Stranger with Empathy and Kindness, by Rabbi David Seidenberg
Vayera: Training in Hospitality, by Dr. Irene Lancaster