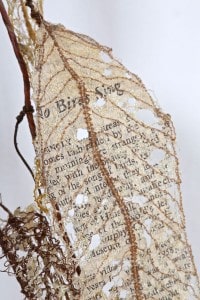 The pomegranates blaze red like giant burning grapefruits in Tal Shochat’s photograph where, in a series of images, she depicts fruit trees native to Israel. She hand washed each fruit and every leaf before taking the mesmerizing photos.

The Tree exhibit at the Contemporary Jewish Museum called: Do Not Destroy- Trees Art and Jewish Thought is a nature lover’s delight. Jews have a powerful attachment to trees – our most holy Torah is referred to as “The Tree of Life” and the law referred to in the title of this exhibit: bal tashchit, do not destroy, comes from a Torah passage instructing us not to cut trees in times of war. This leads us to understand that in times of peace, we must especially not cause destruction to our environment.

The exhibit features artists who have interpreted Tu B’Shvat  by repurposing wood in their piece. Observers will enjoy works like the salvaged wood furniture turned back into a tree by Tor Archer.  In Yves Behar’s “Aleph” fashioned from Bay Laurel wood, his teaching is: aleph is the first letter of the Hebrew alphabet and our awareness of nature should be first on our mind. My favorite of the Tu B’Shvat collection is Lisa Kokin’s “No Bird Sings,” which appears to be woven eucalyptus leaves attached to a branch. Upon closer look, the leaves are in a state of decay and she actually has used pages of Rachel Carson’s Silent Spring in fabricating the leaves. “Silent Spring” criticized the chemical industries detrimental effects on birds.

Preserving nature and recognizing our place on the land is reflected in so many Jewish laws, especially those having to do with agriculture, sharing the wealth, preserving human dignity, and limiting our greed. So for me, as Bay Area Director of Hazon and long-time environmental educator, this exhibit which ends in room of Jewish tree teachings, is spectacular! It speaks to my understanding of Judaism’s most important tenants.

Learn more about “A Walk Among the Trees.”

Deborah Newbrun is Hazon’s Bay Area Director. Having grown up hiking and backpacking in San Francisco, Marin, the East Bay Hills and Yosemite, Deborah started her career as a National Park Service Ranger and Naturalist for several Bay Area Environmental Education organizations. She brought her naturalist and Jewish life together when she spent 25 years running Camp Tawonga, where she helped to build a residential camp with a national reputation for its environmental ethic, its Jewish leadership and staff training, and its cutting-edge camp and family programs.