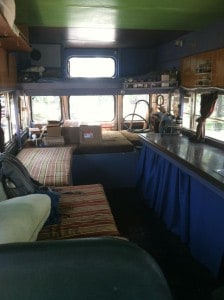 Shalom! I’m Molly, a member of the program support staff for this tour, and I’m thrilled to be putting up the inaugural post for this blog.

Today marks the first day of orientation, where the educators will all meet for the first time (those who don’t already know each other) and continue developing the energy, knowledge, and sense of community that we’ve been working toward since February when we first started planning out the route.  They’re choosing their educational stations (worms, bike blender, solar ovens, veggie oil), their beds, and their rules to live by for the tour over the next three days.  To recap, here’s what they’re looking forward to:

The educators are getting excited to hit the road, catch some rays, and begin the exciting journey of learning and growing along with pockets of our people scattered about this great strange nation. Five educators will be touring the nation, talking about Judaism and sustainability in different communities. They’ll be busting into the Rockies in the beginning of July and then head straight through the center of the contiguous 48 — you can check out the route in the tab entitled “tour schedule.” In just one month the five educators will cover around 2000 miles, hit 21 camps, schools, JCCs, and youth groups, visit 10 states, meet over 3000 kids, educators, and community members, and take an as yet undetermined number of wacky photos and videos, packed into a topsy-turvy bus sandwich fueled by used vegetable oil, the open arms of generous communities, and ruach. You can learn more about the educators aboard the bus (and the two of us helping out from NYC) over in the nearby “educators” tab.

This year’s tour theme is “Gearing Up for Shmita,” as Rosh Hashanah marks the beginning of a Shmita year, the seventh year in the farming cycle laid out in the Torah. During Shmita, farmers let their crops lie fallow, and harvests become public property. Outstanding debts are forgiven, and each person takes only what they need from whatever fruit the land provides in that year. Although some of the formal aspects of Shmita are not applicable to most people, the concept can teach us timely lessons about property, consumption and production, and the importance of rest. It’s fortuitous that this year also marks the seventh year since the Topsy Turvy Bus’s conception in 2007, when Ben Cohen of Ben & Jerry’s commissioned it to spread awareness of wasteful government spending, and the topsy-turvy state of the planet. Cycles of seven are a central tenet of Jewish tradition, with Shabbat, Shavuot, Shmita, and Jubilee all celebrating the completion of periods of seven. We hope that this Shmita year of the Topsy Turvy Bus Tour will be a celebration of what we’ve accomplished, and a joyful look into the seven years ahead. I hope you’ll get revved up for Shmita with us!