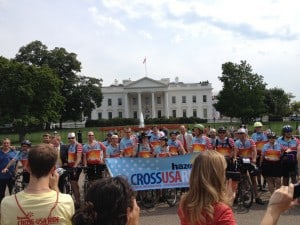 Ten weeks ago, the Hazon Cross-USA Ride left Seattle, and yesterday it ended in Washington DC, 3,600 miles later. 10 cyclists crossed the whole country and 60 others joined along the way. They raised over $120,000 in support of sustainable food systems from over 1200 donors.

Along the way they visited 13 states, climbed the Rockies and the Appalachians, and crossed the Missouri, Mississippi, and Ohio Rivers. They met farmers, policy makers, rabbis, and ordinary people sharing their stories and interaction with our country’s food system.

It’s no surprise that the most impactful piece of the journey was experience the system in action. Riders visited an ethanol plant, toured a grain elevator and windmill farm, spoke to USDA representatives, and volunteered at bike shops and soup kitchens, among other stops on their trip.

Our riders in total cycled into Washington, DC last night. They were welcomed at the White House by Jarrod Bernstein, White House Director of Jewish Outreach, and Max Finberg, Director of USDA Center for Faith-Based and Neighborhood Partnerships, as well as friends, family, and members of the larger Hazon community. While at the White House, Nigel Savage, Executive Director of Hazon, voiced Hazon’s concerns around the Farm Bill and the drought, and Finberg noted the efforts of Hazon and the Jewish Farm Bill Working Group, while explaining the administration’s Farm Bill priorities.

It’s not too late to ride with Hazon in 2012! There are still spaces available at the Hazon New York Ride. Registration is only $100 if you bring a tent. Use the discount code “tent”. Or join the 2012 Israel ride, October 30th-November 6th. Prices rise August 20th, register today.  [/yellow_message] 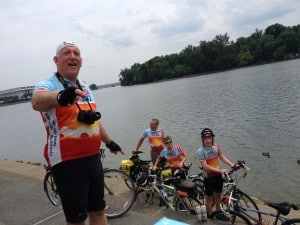 All summer long, supporters and well-wishers got to watch the trip unfold. Follow the links below to rider blogs and read about their experiences first-hand.

Additionally, throughout the ride we provided weekly recaps, and previews of the events before they happened, especially when local communities could join us. 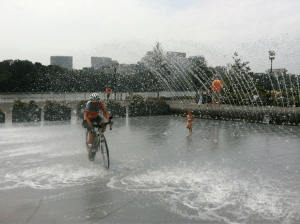 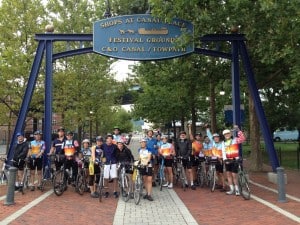 Kicking off the last trail ride, the C&O (Chesapeake and Ohio) Towpath 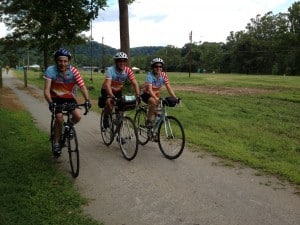 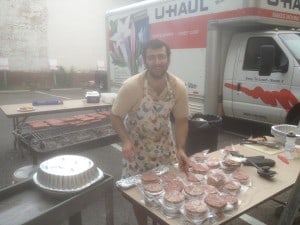 While in Minnesota, the riders took time out of their busy schedule to make an appearance on NBC.

I did things I never thought I could do, including bike 88 miles in one day. I’ve made some amazing friends, biked some beautiful stretches of the country, and taken a much needed vacation. Though my body is tired, I feel mentally refreshed and re-energized.

We visited Jewish communities in Missoula, Helena, Bozeman, Billings,  Spokane, Aberdeen, and Twin Cities. We learned about these small communities including how they started and ways in which they are trying to maintain themselves. They greeted us with open arms and I think were energized by this Jewish group that was celebrating Jewish life, supporting environmental change, and cycling across the country.

I’m feeling sad that my trip is about to come to an end, but at the same time, I’m so grateful for all of the tremendous experiences I’ve had along the way.

I love my bike. It is an extension of my body, giving me a sense of strength and power. At 65, I have recaptured the freedom, adventure, and imagination of my childhood…Will I call it quits? Absolutely not. Have I lost the joy that I have experienced? Positively not! Would I do this again? Absolutely not! Is it good for my character? Positively…I will miss the joy of being with young people and watching the emerging leaders of the Jewish future. And, of course, I will miss riding.

I hope this ride inspires in all of us a sense of what together we can accomplish.

It’s not too late to donate to a rider or make a general donation in support of their ride and sustainable food systems.

There are so many people to thank for helping to make this ride happen. Thank you to the riders, those who biked the full distance, and every rider who joined for a leg of the journey. Thank you to all of the donors who supported those riders and sustainable food systems. Thank you to the sponsors who helped make the ride happen. We have tremendous gratitude to all everyone who hosted riders along the way. And lastly, thank you to the Hazon staff, on the road and on the ground, and the Hazon board.

The Hazon Cross-USA Ride made headlines locally and nationally! Take a look at the coverage.

Interested in joining our Ride next summer – either for the whole country or a segment? Sign our interest form and be the first to know when registration opens.