A year ago I was laying in a hammock on a Brazilian beach, planning a year’s worth of Shmita study and action that will rebrand this ancient sustainability practice rooted in the Land of Israel for new digital generations all over the world.

Hovering between earth and sky provided the perfect setting to what I was designing: An adaptation of the Shmita concept beyond its original halachic, geographical and agricultural settings so that it will prove useful and meaningful to so many more of us. 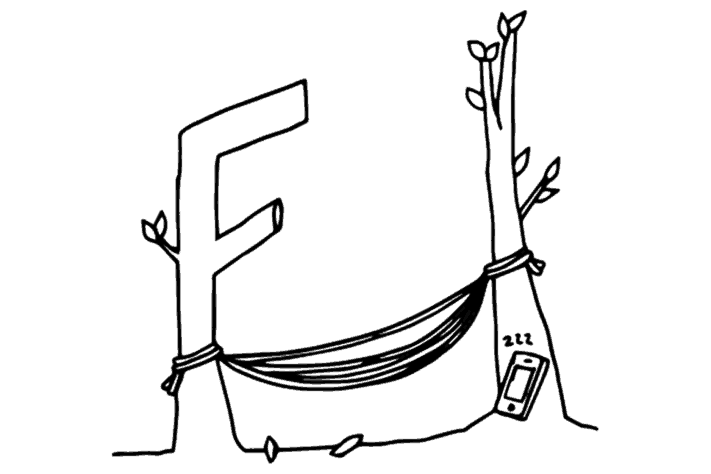 Now that the year is almost up and FallowLab, the project I designed, is starting its descent, it’s time to get back into the hammock and reflect on lessons learned and theories tested. Many creative projects and conversations emerged this year with varying degrees of success at wrestling with Shmita and offering ambitious renditions and new traditions. What sticks for future? Did we live up to the values of Shmita, did this year live up to expectations?

Luckily I don’t have to go back to Brazil to find a reflection-friendly hammock.

When I got back home last summer I set up a shmita garden in my Manhattan backyard: Stripped the garden of every single plant for a year of fallow being and hung up a hammock where the Hydrangea used to grow. A friend described the result as a ‘attractive meta halachic post zionist installation’ and a few people were offended, but all I wanted to check out is what it feels like to honor the holiness of land everywhere, and honor every bit of earth with a year of rest, Hydrangea free.

Beyond classical halachic obligations, I wondered, is there significance and value in this and other types of extracurricular shmita-innovations as legitimate and tangible tools for positive change?

So now I lay in this hammock, on a muggy Manhattan morning, realizing that the most important lesson I am taking from this year is that Shmita is just like a hammock: It provides elevation of body and spirit, offers change, rest, joy, and most importantly – It can function anywhere and everywhere – perfectly.

“The question of observing Shmita outside the land of Israel is almost uncharted territory.” write Rabbis Margie Klein and Ebn Leader in a compelling article that was studied earlier this year as part of FallowLab’s monthly salons. Their approach calls for an expansion of Kedusha – honoring the Land of Israel’s unique sacred status as a starting point towards ‘broadening the boundaries of holiness.’

So can 21st century Shmita go global? Not everybody thinks so. While creativity is appreciated, a lot of people think it should stay rooted in its Halachic and Israel-based perimeters. In the ongoing complicated conversation between Israel and the Diaspora, Shmita presents a fascinating modern challenge, not without its tensions.

A recent meeting between North American and Israeli rabbis, held in Jerusalem to examine possible projects, some Shmita related, that will build better bridges between these increasingly different Judaisms, ended with some tensions, and polite discord.

Despite so many shared values, visions and challenges, what became apparent was the disconnect over the centrality of the Israeli narrative. American rabbis, deeply tied to Israel in multiple ways, expressed their communal priorities that have more to do with preserving the Jewish story in an increasingly assimilated American consumer culture. For some of the Israeli rabbis, the focus for all Jews had to remain Israel, its fate and future – spiritually and politically. One prominent Israeli rabbi, in a private conversation right after the meeting, summed up his frustration:
“Here in Israel will be the Shechina, and over there – in America – there will be a Shoah.”

At the time, I was too stunned to reply. We met the next day to unpack his statement and engage in what became a painful, honest and unresolved conversation.

“Shoah’ I understood, was his dramatic way of describing the legitimate concerns, shared by Jewish leaders worldwide, regarding the rising rates of assimilation and the decreasing – or shifting – numbers of engaged Jews. Please don’t use this term, I asked the rabbi. It’s overplayed and offensive. The Shoah, I reminded him, was one terrible chapter in a long saga of Jewish demise and survival, all over the world, including Jerusalem. What will American Jewry look like 100 years from now is anybody’s guess, and the same goes for Israel. A lot of creative innovations and dramatic evolutions are fertilizing the Jewish global ecosystem now more connected than ever. The physical and spiritual-ethical survival of the Jewish people in the 21st Century is one that should unite us globally and be of equal concern as to that of Israel and its people.

And so it is with the Shechina. She is, it is said, everywhere.

Or not. The rabbi’s assertion, central to the Israeli Religious-Zionist mindset is that the Divine Presence, She who once dwelt inside the gaze of the Cherubim in the Holy of Holies, was exiled along with her children when the Temple burned in Roman hands. She has been with her exiled children all through history, alive in liturgy and longing, rituals and dreams, celebrations and massacres. But now, according to many contemporary mystics and rabbis – she is back in Zion, and it is there that she is at the center of the incredible project of revival called the State of Israel. In the absence of the temple she is, according to both Bialik and the Belzer Rebbe – somehow present in the very air of Eretz Yisrael.

This is where I take it personally. The Shechina resides, according to our sages, “where two sit together and speak of Torah.” (Mishne Avot 3:2) In other sources She is present each time a minyan forms to pray. With all due respect to the evolving theologies and sacred stories of our people, I am not convinced that Shechina has already resettled in Jerusalem (did I miss a memo?) or that her domain is now exclusive to Israel’s elusive borders. The denial of this Divine symbol from Diaspora Jewry is a limited, narrow minded approach to a delicate and critical conversation that in my opinion needs to graduate from the paradigm of ‘either/or’ and come closer to ‘both/and’.

As an Israeli now living in New York, my heart is indeed also in the east and my eyes often look to Israel with love, admiration and concern, in awe of every astounding achievement and with worry for each challenge. I came to the US as a liberal gay Jew almost 20 years ago seeking to deepen my spiritual journey and cultivate my leadership in a Jewish community that continues to honor, embrace and support my path. It was not so easy or even possible to find what I was looking for in Israel 20 years ago and continues to be a challenge to many who are seeking free expression of our version of Judaism, with dignity, respect and backing. Like many others in the rest of the world, my NYC based congregation is thriving, and my children are raised here, taught to prioritize pluralism and love their Judaism in its multi-color way. The future is unknown but the present is rich with noble creations of sacred circles and local communities that pursue justice, increase literacy and invite the Shechinah to dwell among us, wherever we are.

Which brings me back to my key takeaway from this Shmita year.

With millions of contemporary Jews all over the world struggling to define their connection to their past, to their soul, and to each other, I want to suggest that we dig deep into our shared toolbox of ideas and focus on those that will help us increase and expand, not limit and contain, the sense of the sacred in our lives and in the world.
Shmita is one of those tools, eagerly awaiting new interpretations and creative solutions. As we begin to wrap up this cycle and prepare for the next, I want to invite us all to get into a hammock, defy gravity for just a moment, ground ourselves with gratitude firmly in the earth that supports us, with our gaze fixed directly at the heavens above. It is in this state of being, in between the here and there, that our sacred and shared essence dwells. There is a field, the poet Rumi wrote, that waits beyond the ideas of good or bad. I’ll meet you t/here. 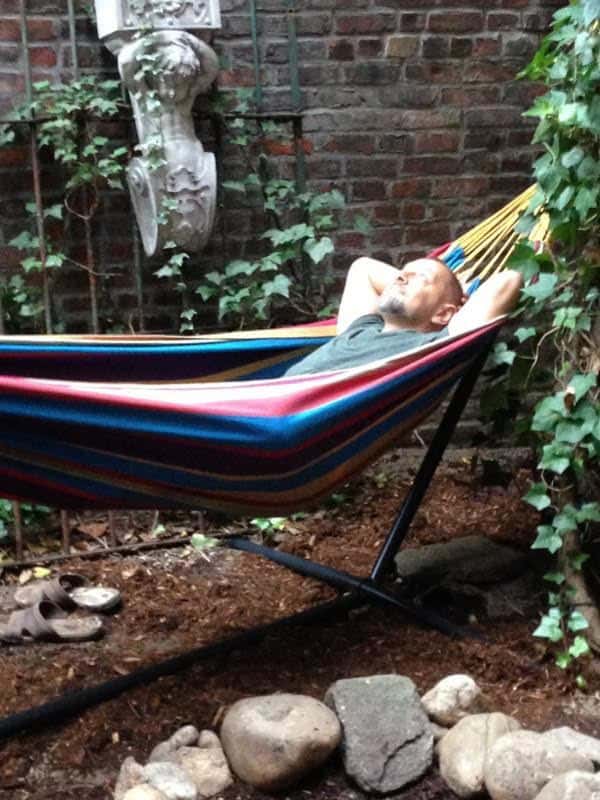 Amichai Lau-Lavie is the founding director of Storahtelling Inc and the spiritual leader of Lab/Shul. An Israeli-born Jewish educator, writer, and performer, he was hailed by Time Out New York as “Super Star of David,” an “iconoclastic mystic,” and as “one of the most interesting thinkers in the Jewish world” by the New York Jewish Week.

He is currently a rabbinical student at the Jewish Theological Seminary of America.

Amichai was a Jerusalem Fellow at the Mandel Leadership Institute in Israel (2008-2009) and is a consultant to the Reboot Network, a member of the URJ Faculty Team, and a fellow of the new Clergy Leadership Institute. He is the proud Abba of Alice, Ezra, and Charlotte-Hallel.