Power from the People: A Story of How Moshe and Aharon Led the Israelite Resistance

The parsha Va’eira is the story of Moshe and Aharon’s attempts to free the Israelite people from under Pharoah’s leadership. The parsha begins with G!d reassuring Moshe of G!d’s covenant with the Israelite people and G!d’s promise to free them from the land of Egypt. Moshe tries to tell the Israelites about G!d’s promise but they cannot fathom this happening. G!d instructs Moshe to go to Pharoah himself to demand that the Israelites be freed, a task which Moshe feels inadequate to do partially due to his speech impediment. In the end, Aharon joins forces with Moshe and acts as his speaker, and together they go up against the power of Pharoah. G!d instructs Aharon and Moshe to cast Aharon’s staff before Pharoah and it will turn into a serpent, in order to provide a sign for Pharoah of G!d’s power. This is the first action which Moshe and Aharon take in order to persuade Pharoah to let the Israelites go. Throughout the rest of the parsha, Moshe and Aharon enact the first seven of the ten plagues, each time with Pharoah hardening his heart and refusing to grant freedom to the Israelites despite his promises. The parsha ends with Aharon and Moshe having failed seven times to sway the opinion of Pharoah, the man who holds the power to let the Israelites free.

It seems to be no coincidence that the parsha of Va’eira is read following Martin Luther King day two weeks ago and the Women’s March on Washington this past weekend. Both of these events represent people fighting a greater power in order to fight injustice in the world and grant freedom for others. Martin Luther King, much like Moshe, was a leader of the fight for civil rights, and much like Aharon, spoke for those who suffered within segregated societies. On Martin Luther King day I attempted to pray with my feet by attending a march in downtown Philadelphia where a coalition of organizations came together to continue and honor the spirit of resistance and activism that Martin Luther King engaged in during the fight for civil rights. I again went out to pray in Washington DC where I was one of many standing for justice and righteousness against the rulings of a much larger power.

The parsha Va’eira presents not only the broad parallel of smaller power vs. larger power, but outlines many of the struggles and challenges that exist in activism. For example, in Exodus 6:5-6, G!d, “…heard the moans of the children of Israel, whom the Egyptians are holding in bondage, and [G!d] remembered [G!d’s] covenant.” When organizing, the first step is always to identify the issue, which in this case is that the Israelites are being held in bondage to do the labor of the Egyptians. Moshe then goes to tell the Israelites that G!d has not forgotten them, to which, “they did not hearken to Moses because of [their] shortness of breath and because of [their] hard labor,” (Exodus 6:9). This moment feels relatable, as it often seems that persisting social issues are impossible to solve and require organizing movements and leadership to spur change. In organizing, it takes certain individuals to stand up for a larger population of people, much like Moshe believing that the Israelites will one day have freedom. 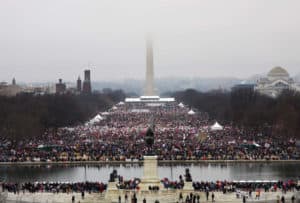 Some of the marchers at the Philly DARE March on Martin Luther King Day. | Photo Credit: BG Productions Photography and Videography

Another relatable struggle that appears in this parsha is Moshe’s own insecurity in his leadership and ability to create change. G!d says to Moshe, “Come, speak to Pharaoh, the king of Egypt, and he will let the children of Israel out of his land. (Exodus 6:11)” to which Moshe responds, “Behold, the children of Israel did not hearken to me. How then will Pharaoh hearken to me, seeing that I am of closed lips?” (Exodus 6:12). Moshe’s fears both that he does not have the support and belief of the Israelites, and he also doubts his own ability to speak to Pharoah, due to what the rabbi’s, such as Rashi, believe to be Moshe’s speech impediment. Moshe’s fears about speaking to Pharoah is a relatable challenge to making a demand to someone who holds a lot of power. To alleviate his fears of around speech, G!d appoints Aharon to speak for Moshe, a reminder that in social justice work, each individual has their own strengths and by creating coalitions amongst many individuals enables increased power (Exodus 7:2).

Throughout the rest of the Parsha we experience action after action that Moshe and Aharon take to sway Pharoah to let the Israelites free. Again and again Moshe and Aharon create a successful action only to have G!d “harden Pharoah’s heart.” (Exodus 7:3). This parsha widespread social change does not happen all at once, but takes a series of smaller actions over time to sway a powerful influence. The progression of the plagues in this parsha was a good reminder that trying to create progressive change is messy, and will not happen all at once. In fact, any progressive change does not arise from one convincing action, but from many actions that lead up to the final result. While we do not see it in this parsha, we know that by the tenth plague Pharoah finally let’s the Israelites go. This parsha is an important reminder that there is a lot of hard work to be done before power is overcome and bigger change will happen. 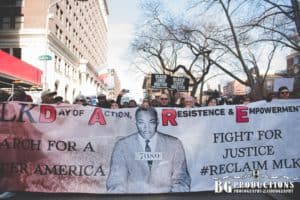 A section of the marchers who showed up for the Woman’s March on Washington. | Photo Credit: Chang W. Lee/The New York

In the JOFEE world, we are also working to create social change. Many of us in JOFEE do work that is related to environmental justice and food justice. Our actions may not always be protests or turning the river to blood, but we work to empower others to think and be inspired to change the world around us. At Jewish Farm School, our work focuses specifically around food justice, or how a better food system can be created that more equally benefits more people. While food justice is work that strives for social change in our food systems, there are many intersections with other kinds of justice work. To further our work and acknowledge that food justice is inexplicably linked with other justice work that needs to be done, we will be unrolling a new workshop series this spring called “Food Justice is Racial Justice.” The goal of this workshop is to educate about the intersection between food justice and racial justice through a Jewish lens. We also aim to make sure that this educational series does not stand alone and links to tangible actions that our participants can partake in to further their justice work. Through our work at Jewish Farm School we hope to empower more folks to be like Aharon and Moshe, and to take action to free those who are in bondage from the Pharoah’s in our world.

Liora Lebowitz hails from Boston, MA where she grew up attending nature day camp and Jewish day school. After a brief rejection of nature-related activities in her teen years, she has reconnected with the Jewish Eco world through her work at Eden Village Camp and as a member of the 2015 Fall cohort of TEVA. Liora is excited to be the JOFEE Fellow for Jewish Farm School in her new favorite city of Philadelphia. She hopes to learn even more about food, farming, and how to keep the squirrels our of her garden.

Inspiration, aspiration, respiration…
Here’s what you can do this Tu b’Shvat