“I’d like to go to the fields and glean among the ears of grain behind someone who may show me kindness.” 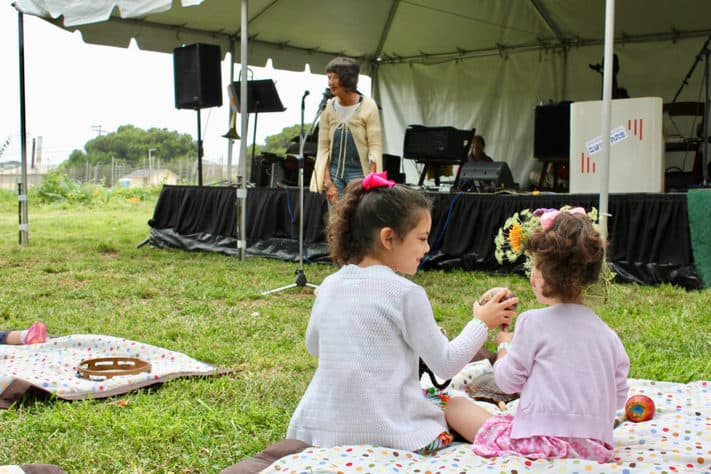 This statement, from Ruth to Naomi in the Book of Ruth, holds so many aspects of what a Jewish Community Farm can provide. This week’s parsha, Naso, spells out the different functions distinct groups and structures had while traveling in the desert. Naso begins by taking census of and detailing the specific duties assigned to each family line of Levites and ends by listing each tribe’s offering for the inauguration of the alter in the Mishkan.

This past Sunday, I had the pleasure of co-organizing a Shavuot Festival at Coastal Roots Farm. Over 300 people attended, of all ages, both Jewish and non-Jewish. It was incredible to see an event have such strong Jewish content and influence while remaining a welcoming and accessible festival to all.

The festival focused on exploring the story of Ruth and on Shavuot’s agricultural roots celebrating the start of the summer harvest.

Participants danced to live klezmer music; learned how to make cheese and tend to their tomato plants; and painted, created, and wore exquisite flower crowns in celebration of the harvest.

Children listened to a storytelling of the Book of Ruth, adults listened to conversation about modern iterations of gleaning and other values from the Book of Ruth and folks of all ages walked our Labyrinth garden, stopping to read cards along the way that told the story of Ruth and gave prompts to help participants think about how the story can relate to their lives. The festival culminated in a parade where we marched with summer fruits and then did a short bikkurim (first fruits) ceremony where everyone fed their neighbor a piece of cucumber!

So what is the story of Ruth? The Book of Ruth, traditionally read by many Jewish communities on Shavuot, tells the story of a family living in ancient Israel. Famine strikes their city and they move to the neighboring country of Moab. The sons marry, then die along with their father, leaving behind Naomi, the matriarch of the family, and her daughter-in-law Ruth. The two then return to Bethlehem. In order to get by as landless returners, Ruth taps into the many systems in place to ensure the disenfranchised are cared for.

Ruth was born and raised in Moab, yet in her time with Naomi and her family Ruth must have learned about all of the Jewish agricultural practices. When they arrive in Bethlehem, it is Ruth, the newcomer and recent convert, who brings up the idea of gleaning.

I love this book because rather than listing all of the different ancient agricultural practices, as Leviticus and Deuteronomy do, The Book of Ruth tells a story which takes place at a time when all of these practices were in use. One jam-packed quote contains many different practices:

“I’d like to go to the fields and glean among the ears of grain behind someone who may show me kindness.”

Jewish Community Farms are in a particularly unique position within Jewish Outdoor, Food, Farming & Environmental Education (JOFEE) to infuse kindness and Oshek into both internal and external business practices. As a relatively new movement which is still determining its identity, Jewish Community Farms can decide to identify themselves through treating employees and customers, as well as the earth, with radical kindness.

Jaclyn Kellner is Jewish Farm Educator and JOFEE Fellow at Coastal Roots Farm, where she is responsible for Jewish and other educational programming. Prior to joining Coastal Roots Farm, Jaclyn taught residential Outdoor Education to 4th through 6th graders in Calabasas and Livermore, California. She enjoys spending as much time as possible outdoors getting really excited about things and then getting other people excited about them as well. Check out Jaclyn’s full bio, alongside the rest of the 2017-18 JOFEE Fellows cohort, here.

The Paris Accords – Now What?
A few first words from me, as Hazon’s acting CEO…