By David Weisberg on March 27, 2014 in Newsletters, Shmita, Tzedek/Justice

The story of Hazon is often a story about stories.

Next week, on Tuesday, April 1, at the Green Building in Brooklyn, we’ll be telling the stories of four incredible inductees at our 3rd annual If Not Now Benefit, honoring the powerful stories of Rabbi David Ingber, Barbara Ribakove Gordon, the Margulies Family, and Margot Seigle. It’s going to be a wonderfully fun and meaningful evening, and, if you are in the New York area, I hope you’ll join us.

But, for now, I want to share an unbelievable story that happened during our recent Purim Retreat at Isabella Freedman with Roseanne Barr. In the last decade of the 20th century, Roseanne Barr brought the issues and concerns of working class America to life through her groundbreaking sitcom “Roseanne.” At our Purim retreat, it was Roseanne Barr once again bringing concepts to life, this time in such a powerful and profound way that it literally changed the lives of some of those in the room with her.

One of Hazon’s current points of focus regards creating a renaissance around the Jewish concept of shmita, the sabbatical year described in the Torah and other Jewish texts, which is scheduled to begin on Rosh Hashanah of 2014. A rarely recognized tradition, particularly outside of Israel, the idea of shmita includes not only letting farm land lay fallow for a year, but also, among them, concepts such as resource redistribution and debt forgiveness – concepts that align perfectly with Roseanne’s core beliefs and that were a key platform during her 2012 Presidential run.

Despite being the CEO of Hazon, I was slow to understand why we’d be making such a big deal about the upcoming shmita year and, more importantly, how we could make it feel relevant to our times.

It was within that context that a remarkable story unfolded at the Isabella Freedman Purim gathering, all so quickly that it happened in almost the blink of an eye, and so profoundly that it seemed like it could be happening in slow motion.

On Saturday, during the retreat’s Shabbat lunch, Sarah Chandler, Hazon’s Director of Earth-based Spiritual Practice, delivered a brilliant teaching on debt relief through the lens of shmita. As Sarah was concluding her talk, Roseanne came over to her and said “I want to say something when you’re finished.”

Roseanne proceeded to speak to the attendees on the topic of debt release and wealth re-distribution, suggesting – I believe correctly – that, while many people support the concept, they often don’t feel like they have a role in making it happen. She then suggested that everyone has debts that are created, not by borrowing, but by any time anyone acts in a way that somehow takes advantage of others, for example by getting a better deal than one is entitled to. She suggested that part of releasing those debts, in fact, involves paying them back to the world to help others. She asked that everyone see if they could add up in their heads how much debt to the world they had created by taking advantage of others in the past year. 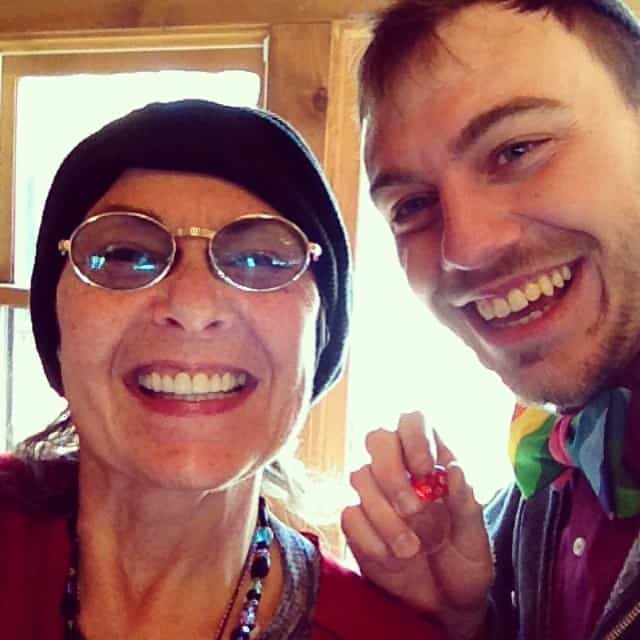 She then asked if there was a volunteer who would step forward and talk about a debt they had from such a situation. One woman, Lisa, raised her hand and spoke about a time she ran away from home as a teenager and the pain and suffering it caused for her family. Roseanne asked her how big of a debt she thought she owed for that, and the woman answered “a billion dollars.” Roseanne told the woman not to be crazy, because she clearly didn’t have a billion dollars.  She asked her how much she did have that she could use to pay back the debt. After a small back-and-forth, the woman offered that she had $5,000.  Roseanne told her that she should release herself from her debt to the world by using the $5,000 to help others in need. The woman agreed. (Roseanne can be pretty powerful in that way.)

Roseanne then asked “Who in this room needs $5,000?” A number of people raised their hands, including three struggling artists who happened to be sitting at my table. Roseanne came over and spoke to them, heard their stories, and then responded, “I’m going to go get that woman and bring her over here to introduce you. She’s going to give the three of you $5,000, and I’m going to match it.”

And, following a teaching about shmita and shared resources, in the course of about ten minutes, Roseanne had actively redistributed wealth in the room, with two people who had money to give (both Lisa and Roseanne) releasing part of their debts to the world by helping three women in need, among them one Jew, one Muslim, and one Christian, all of whom at this point were in tears.

It was one of the most powerful things I’ve ever seen, all inspired by the concept of shmita, as championed by Hazon, and the creativity and strength of a woman who continues to turn concepts and issues into real life action.

And I learned what kind of magic can happen when we talk about the concepts of shmita and allow people to creatively discover ways to make it relevant in today’s world. This Purim, at Hazon’s Isabella Freedman Jewish Retreat Center, Roseanne Barr invoked ancient Jewish tradition in a modern framework and changed three women’s lives in a profound and important way.