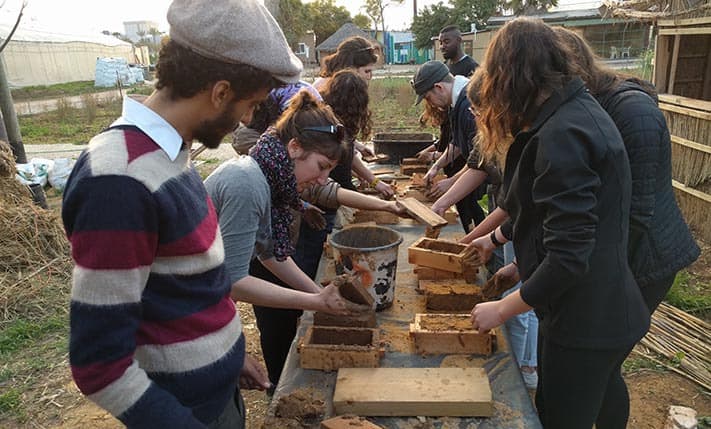 This morning started out on a different note than the earlier days of the tour. Instead of having breakfast together at our hostel and then heading out to visit an intentional community, we woke in homes scattered throughout Jerusalem, after a lovely night of home stays in the Horesh community in Kiryat Yovel or with friends.

We reunited at a lovely cafe, where we met with two staff members from the Ministry of the Diaspora of the State of Israel. This is one of Israel’s newest executive agencies, which is focused on supporting Jewish communities throughout the world. It is a bold new concept that Israel can have a role in developing Jewish life in the Diaspora, in conjunction with Jewish communities in the Diaspora supporting Israel financially and politically. We had an opportunity to learn about the ministry’s forward thinking global efforts and share about each of our projects. It would be wonderful to continue this collaboration between Hakhel and the Israeli government moving forward. 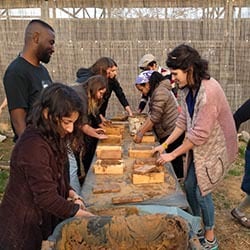 Our next stop was in Lod, where we met with Garin Elyashiv, a community committed to acts of hesed. The community has rapidly expanded in the past decade. Their own lives have been enriched by supporting one another, and they are having a major role in improving the local schools and providing resources to people in need throughout the local area.

We traveled to Kiryat Gat, where we visited the Atachlit farm, which is a project of an Ethiopian Israeli community named Hinneni. The farm was built to provide Ethiopian elders a place to be together and engage in the agricultural work they excelled in prior to making aliyah. In addition, it serves as an educational center for visitors from Israel and abroad to learn about Ethiopian Jewish heritage. We had the chance to get our hands dirty, making bricks out of dirt and sand, that will be used to build a traditional Ethiopian structure. We also had the opportunity to speak with two community members from different generations about their experiences in Israel, the importance of cultural heritage and how it important it is to live within a community in order to be able to give back and make real change. A highlight was being offered traditional bread and coffee, as is the custom to offer guests in Ethiopia.

We ended the day in Shuva, a moshav where we will stay for the next few days. We enjoyed a musical jam session and a barbeque dinner with the Shuva garin. We were also delighted to witness a joyous event: a new sefer Torah was recently completed, and we were there for a dance party procession, complete with a DJ and a truck with colored club lights, to the torah’s new home in the community’s synagogue.

Two important themes emerged for me today that will stick with me. The first was around Israel’s role in supporting Jews worldwide. This was obvious in our meeting with the Ministry of the Diaspora, but also in the tour we are on as a whole. Jewish communities in the United States, even innovative ones like the ones we represent, have so much to learn from the work being done by intentional communities throughout Israel. The second theme was the transformative power of sending the children of intentional communities to local public schools. This serves as a vehicle for improving education for all kids in the school, primarily through parental involvement. It also changes the nature of relationships between members of the intentional community and others in the neighborhood – they become true peers and partners, which makes the work being done more meaningful and successful.