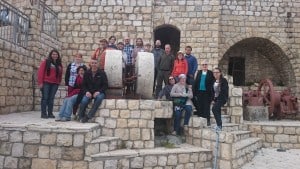 As an Israeli who served in the IDF with Druze soldiers, it was a great privilege to visit the village of Beit Ja’n. Our guide and interlocutor was a young woman named Maya, herself a success story of the Druze community organization Ofakim L’Atid. Ofakim L’Atid means future horizons, and has branches in 8 out of Israel’s 18 Druze villages, with 2-3 more villages likely joining in the near future (note: this does not include the Druze populations of Ramat HaGolan which are in a separate category). Their activities include bike rides, distributing food to the needy, classes in nutrition and youth lounges for thousands of participants throughout Israel.

Unlike any of the other communities we visited, the Druze Ofakim L’Atid community is run ENTIRELY ON A VOLUNTEER BASIS. No one is paid for their work, in fact often the organizers proudly pay out of their own pocket to help make sure a program is successful. The initial core group was made up of Druze IDF officers, but has since grown to over 100 male and female community leaders of various ages.

Maya, our guide, participated in the youth programs as a teenager and then joined the leadership committee as an adult. With near perfect English, she explained to us that their village had been populated for over 2,000 years, dating back to before the destruction of the 2nd Temple. She explained that the five colors of the Druze flag correspond to the five primary Druze prophets, one of whom is Jethro, Moses’s father-in-law. Her long-term plan is to study International Relations at Tel Aviv University, but for now she has her hands full balancing a full-time job, her volunteer work with Ofakim L’Atid and her home duties as a Druze woman. When asked how she had time for so much responsibility she said “The volunteer work is a sacred duty that is part of my religious commitment. It is one of the most important things in my life, so I organize my other activities around that.” I couldn’t help but wonder what would Jewish community life look like if we brought that same level of commitment to building community?