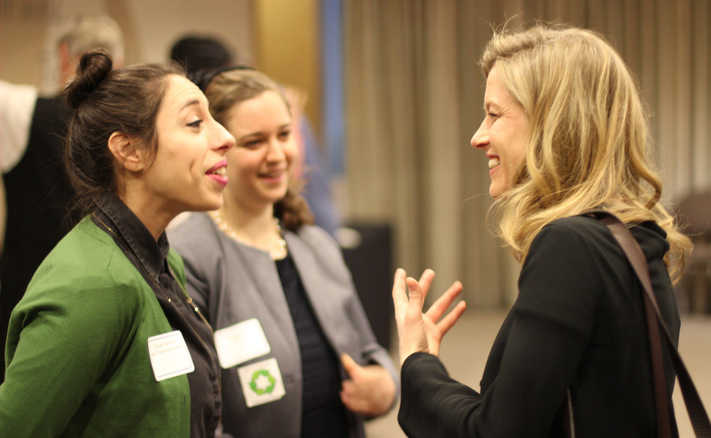 During this last seven-year shmita cycle, UJA-Federation of New York has invested nearly $2 million in Hazon’s Jewish Greening Fellowship. It was brought into existence by Adam Berman and Rabbi Deborah Joselow and it has been very ably led, in succession, by Rachel Jacoby-Rosenfeld, Dr. Mirele Goldsmith and now Becca Linden. This week’s Leading Green gathering at UJA-Federation of New York was a moment simply to note how much has been accomplished.

JGF organizations have raised roughly $3.6 million from mostly state and local sources for green improvements and programs, and they will save – at minimum – at least $2 million over the next decade through increased energy efficiency and reduced waste. So just in financial terms, the program has been remarkably successful, at a time of significant financial stress across Jewish non-profits. But the financial impact is only a part of it:

The most recent cohort of 20 JGF institutions, from 2013-2014, reported the following to us in their final reports:

And at the Jewish Climate March in September, it was JGF alumni, coordinated by Hazon, who took a lead in rounding up a significant Jewish contingent at the march – nearly 150 co-sponsoring Jewish organizations, by the day of the March itself.

What I found most gratifying on Tuesday was the level of the conversation. The headliners – Eric Goldstein (CEO of UJA-Federation of NY), Karenna Gore and Yossi Abramowitz – were all compelling and thought-provoking. But it was in small sessions that we saw the level of detail and learning that is now being applied. How does one build an effective Green Team? How has composting been successful and what can we do significantly to increase composting across Jewish institutions? How does one effect change that is both top-down and bottom-up? What have we learned about the value of energy audits? How do we connect “soft” processes (education, engagement) and “hard” ones (HVAC, insulation)?

Aliyah Vinikoor from the Jewish Theological Seminary spoke about how involvement in JGF helped JTS to recommit to sustainable practices, reducing energy usage, starting some really important Jewish environmental education programs, and shifting the culture of the institution to be more focused on environmental impact globally. Wendy Seligson at the 14th St Y and JR Rich at the JCC of Staten Island each described detailed, painstaking multi-year efforts that have today materially strengthened both institutions and had a profound Jewish impact on participants.

In the coming years we hope and intend to strengthen the Jewish Greening Fellowship here in New York. We hope to launch future new cohorts. We mean to publish some of what we have learned. And we hope to start to apply some of its lessons in other parts of the country where Hazon has staff on the ground. If you’re interested in learning more about JGF, or having you or your organization join a future cohort, please be in touch with Becca Linden at becca.linden@hazon.org.

The Taste of Shmita
Keeping Our Balance: Purim, Freud, & Copenhagen