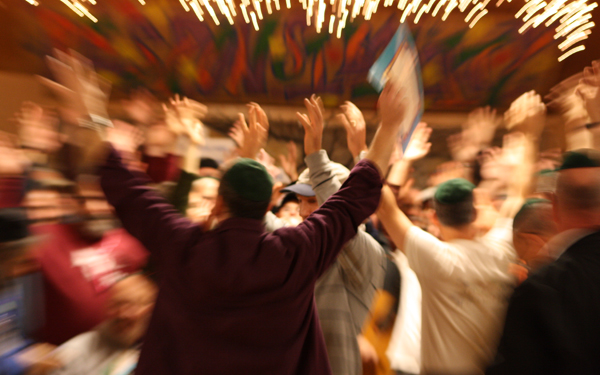 The Jewish Men’s Retreat, or JMR for short, isn’t a kiddush club or a poker night among pals drinking bourbon and smoking cigars (although there is whiskey and there are cigars after Shabbat for those who partake). The JMR is a grassroots, multi-generational lay-led gathering which, over the last two decades, has evolved a structure for helping Jewish men pay attention to the unique aspects of their gender identity and spiritual expression. The twenty-second retreat of the JMR will be taking place this October 25th-27th at Isabella Freedman Jewish Retreat Center in Falls Village, Connecticut.

Over seventy men from all walks of life and streams of Jewish observance and non-observance are registered to attend this year, a third of which are new-comers. According to long-time participant Allen Spivack, “the reason most new people come is because someone tells them about it. We don’t really talk about the normal things, sports, cars, my mortgage, my colonoscopy, we talk about different stuff. Men come for fellowship and it’s beautiful.” Spivack, a carpenter and social-worker, has brought both of his sons to previous JMR retreats and believes they would be different men had they not had come. Allen’s son, Lev, explains, “I feel that the JMR has created a context for my father and me to communicate and share the most authentic parts of ourselves with each other.”

Between seven and eight hundred men have brought back JMR’s transformative experiences to their friends, families, and home communities. According to Spivack, the unwritten goal of the annual gathering is to help men develop a new way of perceiving themselves and bringing this new perspective back into their world, propagating it through every interaction and relationship. “We separate men voluntarily from the world they’re used to. We show them a very different world of engagement with other men and engage them with issues and topics that often resonate with men. They are in some way initiated into another way of living, perceiving, and engaging with themselves and with the world around them. They return transformed…. JMR initiates a process of transformation and takes them out of a place of stuckness. Our fellowship gives men permission to find to find their real masculine voice, their hero’s voice – not the voice of anger and rage (which is really the cowards voice) – but the strong, powerful, loving, passionate voice that they’ve often hidden from themselves.”

Formal and informal mentoring is a signature feature of the lay-led culture evolved at JMR. “Whenever someone needs support and assistance,” explains Spivack, “we encourage men if they’re not comfortable with something to talk with someone about it….[Mentoring means] being able to in a very respectful and supportive way offer the best kind of support and encouragement. JMR encourages men to being open to pushing themselves not only as participants but as participant-organizers and that we’re a safe holding environment. ”

Each year, JMR challenges participants to volunteer themselves to take part in an organizing team of eight people for the next year’s gathering. Responsibilities are dispersed among twenty people serving in different roles. An executive committee called the Wisdom Council is responsible for overall policies, the Retreat’s relationship with Isabella Freedman/Ḥazon, and the new Young Men’s Fellowship Program. The latter, developed by Spivack, offers younger men who have never been to the JMR, an all expenses paid ticket including travel costs.

The fellowship developed by Spivack was initiated in response to a concern that the demographic of the JMR was drifting to men aged 40 to 60 years-old. “We’re trying to figure out how to get younger men [to attend] because when I started going 18 years ago, JMR was much more diverse. One reason we wanted to do things different this year is because younger men come in with different ideas and different needs.”

JMR is open to all self-identified men of all sexual orientations and gender expression. This is important to the JMR in order to help develop understanding and healing between men who have been made to feel alienated, as well as men who have only understood male intimacy in terms of sexual passion.

Sometimes, explains Spivack, “what can can make people feel more alienated than sexual orientation in Jewish life is their knowledge about Jewish life. Some men don’t know what end of the tallis to hold and that’s why we offer assistance they’re looking for – to learn how to use things, Jewish religious articles. On Sunday morning at our shaḥarit service we use it as a tefillin workshop, we bring a lot of extra pairs and we offer the option to put them on and offer assistance from Reb Shawn [Zevit] and other men who offer to help them, and we joke around since it’s not the easiest thing to do to put them on and have them hold together.”

The JMR Wisdom Council has for many years organized the JMR in partnership with Elat Chayyim, the Jewish Renewal retreat center which moved from the Catskills to the campus of Isabella Freedman Jewish Retreat Center in 2006. But according to Spivack, the JMR isn’t “hardline” Jewish Renewal. “There was a Renewal focus back when JMR was at Elat Chayyim but now its more diverse, we have Orthodox men coming this year who accept what we have to offer and we have men who are coming all this way who don’t really know anything about Jewish life but are interested in exploring it. Reb Shawn, who has been our spiritual and rabbinic presence over many years, is Reconstructionist and we have a service which appeals to have a wide range of people as it comes to their spiritual practice.”

Taking place over Shabbat parshat Ḥayyei Sarah (October 25-27), the theme of this years gathering is Laugh, Nosh, Love, Work, Kvell: Restoring Balance To Our Lives’: how to restore balance and connection in your life. The JMR website explains, “Our community of men will consider the ways we can find balance and rhythm by exploring our physical, spiritual, intellectual, and emotional worlds. We will consider how these worlds drift out of balance, and then seek ways each of us can restore balance, wholeness, and vitality to our lives.”

ReSources You Can ReUse!
The Best of Both Worlds