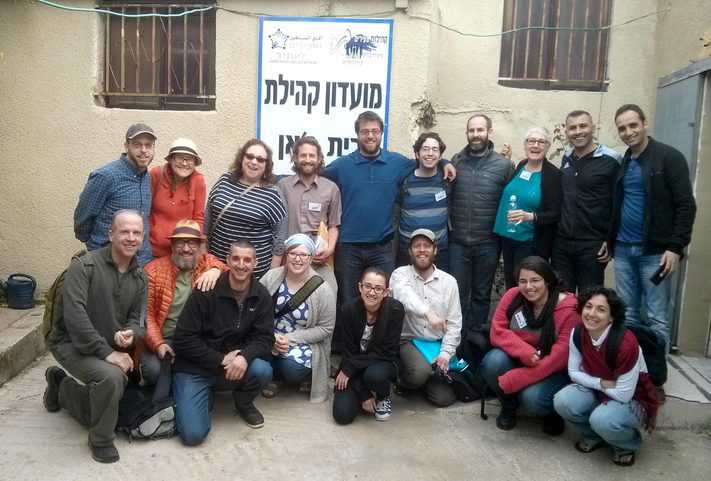 I’m writing in Israel, following a rather remarkable tour of “kehillot mesimatiot” – a newish phrase that literally means something like “mission-driven communities” and which maps, more or less, to the English “Intentional Communities.” It includes a variety of experiments in urban communal living and social change: some of them sharing all their money and some not; some living together and some not. But all of them living in participatory and democratic communities, with an explicit commitment to making the world around them better. We met diaspora 20-somethings who’ve made aliyah and are living in urban kvutzot – groups – in Haifa. We went to Beit Jann to see a Druze community doing remarkable leadership work with teens. We stayed with garinim toraniim, religious groups, in Akko, Bet Shemesh and Lod. In Afula we met the founders and leaders of Tarbut – an artist’s kibbutz of approaching 100 people, who have spawned a youth movement, and developed a queer nightclub scene in the town. In Nazareth Illit we were with Kibbutz Mishol, the largest of the modern urban kibbutzim, co-founded by James Grant-Rosenhead. In Akko we helped the garin there pack pre-pesach food boxes for local people – both Jewish and Arab. We spent Shabbat on Shuva, a Libyan Jewish moshav about 3 miles from Gaza, being rejuvenated by a group co-founded by Aharon Ariel Lavi.

Our trip was co-led by James and Aharon: one balding, ear-ringed and secular; one bearded, un-ear-ringed and… not secular. I suspect they did not vote for the same parties in the recent election. And yet they are close friends and colleagues. They and their movements have set aside the areas where they do not agree and are working closely together where they do – strengthening social capital; touching people’s lives; renewing poorer communities. Astonishingly impressive.

Meeting with some of the people who are founding and leading these communities is like injecting adrenalin in the best possible way – I feel excited, inspired, provoked and engaged.

This is not apologetics; if you’re interested, I have lots of thoughts on the election and its aftermath. But the elections are far from the only important thing happening in this country. Countries and communities are much much more than their elected officials, good or ill.

I’ve spent a lot of time in Israel, and I have never been as inspired as I have been this trip – never ever. I hope, in due course, that Hazon will have the opportunity to enable many more people to come and meet some of the people and projects we’ve met with this week. (And as a sampler, I’ll include a few links at the foot of this email.)

But for now, I want to write now about second night seder – this coming Saturday night.

If you’re participating in one – even more so, if you’re leading one – I want to connect the uniqueness of the night with a set of questions and a conversation that I think make amazing sense.

The backdrop to this is the clarity afforded by being in Israel on the nature of the first night of Pesach compared with the second – because in Israel there is no second night seder. The only thing you do that night is start the counting of the omer.

But here in Israel, seder night is just one night. There is no second night of seder. The only thing we do here on second night – which in the diaspora we do at the very end of the seder when – too frequently – people have lost attention – is start to count the omer.

Because there’s no second seder in Israel it’s much easier to see that that first freedom is not an end or a destination, but the start of the real journey. We spend forty years in the wilderness, with no rules and no Torah, meditating on the nature of freedom. And at the end we have Shavuot – the giving of the Torah, and the taking on of a range of second freedoms – the freedom to keep kosher or Shabbat; the freedom to limit ourselves; the freedom to give up certain freedoms (hate speech; racism; abusing others; smoking cigarettes; using plastic bottles; driving SUVs); and so on.

This is the journey that begins with counting the omer on the second night, this coming Saturday night. And so second night seder is an opportunity to riff on the first night’s themes; to do jazz improv on the themes of this second freedom. Here are four questions to discuss at your seder table:

The Israeli election, in the end, turned on the first freedom. A majority of voting Israelis seem to have felt that the potential threat from Iran or from the Palestinians trumped the possibility of engaging more substantially with a range of other issues. But the communities we met this past week are devoting considerable time and effort to these second freedoms – to the question of what kind of communities we want to create and shape.

So if you’re going to be at a second night seder, and certainly if you’re going to host one, I invite you to think about these questions – or your own variants on them – and weave them into your seder. And then don’t forget to count the omer…