By Nigel Savage on December 6, 2016 in Newsletters, Nigel

This last weekend at Isabella Freedman we held our fourth Jewish Intentional Communities Conference. I arrived at Freedman – truthfully – tired, a little sick, and more than somewhat depressed about the state of the world. I left refreshed, renewed, provoked, inspired, and smiling. The weekend served to remind me of the depth and impact of Hazon’s work, and the subtle and profound eco-systems of change we’re trying to engender and support.

It prompts me this week to explain the context for our work in a slightly different way – what we call, internally, the 3×3 grid.

But first, a more general point: This is a moment when we all need to step forward and step back – and the rhythm of that will be different for each one of us. Stepping forward is about having an impact in the world – changing the world, for good. We have to do that. And stepping backwards is about renewing and replenishing ourselves. We have to do that too. And the first – over the long run – is dependent on the second. Regardless of religious observance, for example, I’m more convinced than ever before that “observing shabbat” is vital to our well-being – for an individual, a family, a community. Our electronica enable and empower and connect us but the constant stream of “news” is making us crazy. We need to be more determined in switching things off. Last week Rabbi Lisa Goldstein of the Institute for Jewish Spirituality led a wonderful session at our staff meeting, and she has inspired us to start a weekly meditation gathering at Makom Hadash, our shared NYC office space. In the coming year we intend to put more effort into staff training, support and wellness – an important commitment for an organization like ours.

Yet nourishing ourselves is not an end in itself. It is predicated in all the religious traditions I know in the presumption that we step back only to step forwards – to do good in the world. That’s why in Jewish tradition the nazir – the voluntary ascetic – gives a sin offering after the period of nazirut. We don’t just want to look after ourselves.

So if we want to have a real impact in the world, and yet not burn out – how do we do that?

That’s where Hazon’s “3 x 3 grid” comes into play. It is an important frame, and although we’ve used it and talked about it informally, internally, and in teaching contexts for many many years, now is a time we want to explain this more steadily in public space.

Here’s the 3 x 3 grid. On one axis we have Education; Action; and Advocacy. On the other we have the Individual (or the nuclear family); an Institution; and the Wider Community. It looks like this: 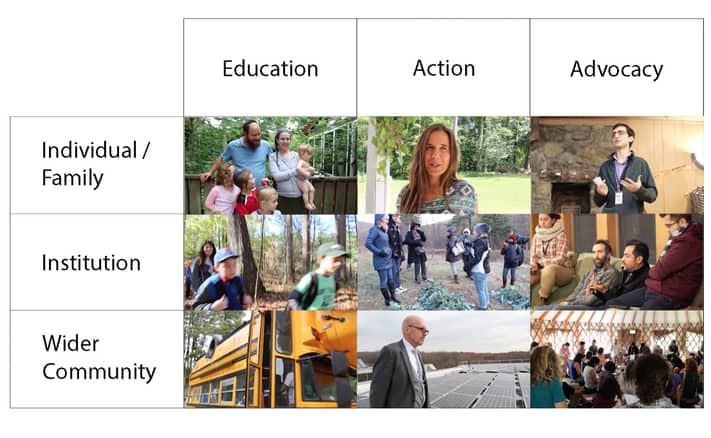 If we’re serious about catalyzing a more sustainable Jewish community and a healthier world for all then we must advance in all nine boxes. Yet none of us individually has the time, the interest, the knowledge or the capacity to really make a difference in all nine. That’s why it’s critical that Hazon as an organization works in all nine boxes, and is building multiple synapses between them and between the work represented by each of them.

Let me give a couple of examples of what this means in practice, and also how you read this table both horizontally and vertically;

The election and its aftermath prompts us to think again about the third vertical. As an organization we agreed as a board, many years ago, that advocacy is one of the things that we do, separate from the content of the issue. Although we occasionally sign on to general letters, I doubt that doing so has much impact other than the symbolic value. In general, what we’ve wanted to do in relation to advocacy is to have a multi-year plan, a clearish strategy, and appropriate partners, including content partners who are focused on a specific part of the work.

Examples of this include, for instance,

Like all people of goodwill, I hope and pray that this administration will strive to do good in America and the world. But declaring that climate change is a Chinese hoax doesn’t bode well. Since 2004 – the last time that a climate-skeptic administration was elected – Hazon has grown strongly. And in the wider JOFEE space we’ve seen the founding and growth of Eden Village, Ekar, Jewish Farm School, Wilderness Torah, and Urban Adamah, to name just five. Plus the Leichtag Commons in San Diego, the Boulder Jewish commons, new initiatives in Atlanta, and JOFEE Fellows in various parts of the country.

Each of our organizations and programs has enormous impact at the human level – touching people’s lives one at a time, person by person, retreat by retreat, cohort by cohort. We will all try to increase our impact in the coming years. Each of us also has the ability and perhaps the responsibility in coming years to figure out how we may also help advance wider public agendas.

Hazon’s board met, post-election, to discuss all of this. We’ve agreed that we want to increase our impact. We’ve agreed – in the first instance – that we’re adding post-election conversations to many of our retreats and programs in the near terms, and that with some of our organizational partners we’re convening a conference call to check in with each other and discuss potential next steps. One of the most influential voices at our board meeting was that of Ruth Messinger, who reminded everyone that this is not only important work but also work that needs to happen over the long-term. She cautioned against moving too quickly.

So… I sang joyously and beautifully on Friday night at our Jewish Intentional Communities Conference. I listened as some of the most inspiring people I know shared their visions of developing stronger intentional communities of all sorts – David Cygielman of Moishe House, Cheryl Cook of Avodah, Aharon Ariel Lavi, and James Grant-Rosenhead, to name a few. We also learned about the inspiring work of Roger Studley from the Berkeley Moshav; Hart Levine from The Beis in Washington Heights; Craig Oshkello and Melanie Kessler from Living Tree Alliance in Vermont; Morriah Kaplan and Howie Stanger from GariNYC in Crown Heights; William and Malya Levin from Alliance Colony Reboot in New Jersey; and Rabbi Debbie Bravo from MAKOM NY on Long Island.

Finally: as the year draws to a close, thank you so much to all of you who support us. A record number of people gave new or increased gifts on Giving Tuesday. If you want to support us we gratefully invite you to give us year-end support. We’re doing vital work. And with your continued support we hope and intend to increase the good we do in 2017 and beyond.

As the month of Kislev unfolds, may this be a time of light in the darkness – days that start to lengthen, seeds that are to be planted, visions being brought to fruition.

With all best wishes,

PS If you’re in the Philadelphia area this weekend do join us for the Hazon Philly Jewish Food Festival on Sunday.