By Nigel Savage on May 3, 2018 in Israel, Israel Sustainable Food Tour, Newsletters, Nigel 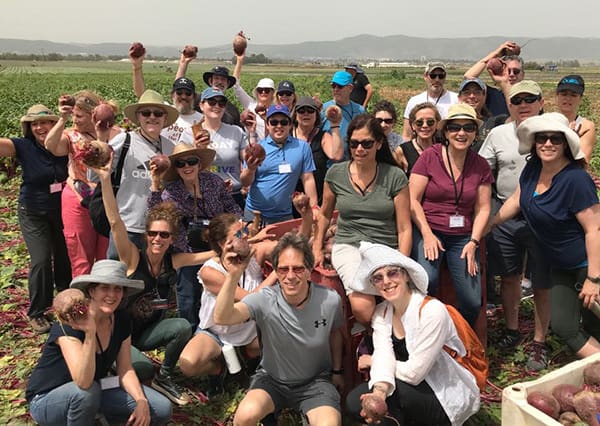 I was thinking about this yesterday, after a fourth day of fascination, perspiration, and inspiration, here on the Hazon Romemu Sustainable Israel Tour. This builds on a range of Sustainable Israel Tours that Hazon has done in the past, and adds into the mix Rabbi David Ingber and Netanel Goldberg, not to mention great participants from Romemu in New York and IJKL in Florida.

Yesterday we were at Roots/Judur/Shorashim, just outside of the Gush Etzion roundabout, listening to Shaul Judelman and Noor A’wad. It was my fourth visit there. It is hard to convey the extent to which Shaul and Noor each told stories which involved recounting the (separate) tragic deaths of any number of Israeli Jews and Palestinians whom they each personally knew; and yet with an overall message that was powerful and inspirational. Their words engendered hope in a profound way.

Shaul is Jewish, observant, orthodox, originally American, a Zionist, a “settler.” Noor is Muslim, Palestinian, a Palestinian nationalist. He has lived in Bethlehem, Amman, and Beit Sahour. Shaul began by talking about shmita, the subject of this week’s parsha. He summed up shmita, rather beautifully, as: “a vision for a just economy, for our people, in our land.”

And he went on: “You can’t take a blessing, and turn it into a commodity. Is a tomato a commodity – or a gift from G!d…?”

It is (relatively) easy for us to grasp this point in relation to tomatoes.

I recalled a similar point made by Rabbi Lord Jonathan Sacks in Dignity of Difference, again citing this week’s parsha. “The theology of Judaism,” he wrote, “insists on the difference between possession and ownership. Ultimately, all things are owned by God, creator of the world. What we possess, we do not own, we merely hold it in trust for God. The clearest example is the provision in Leviticus: ‘The land must not be sold permanently because the land is Mine; you are merely strangers and temporary residents in relation to Me.’”

And this then becomes a powerful theological base to start to explore new and different conversations.

Shaul and Noor and a growing number of their friends begin with attachment to the land and to their own respective traditions. And from that – and a deep sense of humanity, I would say – they have leaned in to curiosity and engagement and listening. And then working, day after day, to interrupt violence; to repair relations; to head off trouble. Rabbis stepping in to stop settler teenagers planning to act violently against Palestinians. Palestinians going to the shiva of a murdered Israeli. And, constantly, fresh perspectives and empathy. Abu Ali Awaad was not with us yesterday, but I remember him saying on a previous trip, “Our enemy is not the Israelis – it is the Israelis’ fear…”

One of Noor’s and Shaul’s central points – made strongly by each of them – was that the “peace process” at governmental levels has simply failed, over a now multi-decadal period. But intervening person-by-person and even incident-by-incident opens up relationship and possibility. Shaul said: “Only Palestinians can persuade us we have a partner for peace. And only Israelis can persuade Palestinians that we don’t want to uproot them.”

I found myself thinking, first, about the idea with which I opened this essay – that we “eat,” every day, a diet of depression. Bad news and bad politics – and it makes us depressed, which makes us scared, which then brings out the worst in all of us. We have to take an actual decision, each one of us, to change our existential diet, the news and the information and the examples that we consume on a daily basis.

And then I thought about the story of Abraham and Sodom and Gomorrah. Our tradition teaches that a whole city can be saved from destruction if there are just fifty righteous people there. And not even fifty – even if there are just forty. Or thirty. Or twenty. Or justten.

In the end the towns of the plains didn’t have even ten righteous people, and they were not saved. But there are many more than ten righteous Palestinians and Israelis, and I know this because I have met them and learned from them and been inspired by them. And we all of us don’t need many examples of true goodness and possibility to start to have a sense of hope. Hazon – Hebrew for “vision” – is indeed committed to encouraging us to think about tough issues – and to do so from a place of possibility and curiosity.

So… our meeting with Shaul and Noor was just a couple of hours in four long wonderful days so far (and our trip is not over). There have been many rich and intense experiences. I davened at the kotel yesterday morning, wearing for the first time there my father’s tallit, and to my very great surprise I found myself crying before the end of the Amidah. A new experience for me. I thought of Reb Shlomo z”l saying, “I bless you that you should overflow your vessels…”

The night before, at midnight, some of us wandered into the remarkable Hamiffal – and we sat down and joined with a dozen local artists in helping to make a new mural for one of the nearby city walls. Earlier on we met artists from Jerusalem Culture Unlimited. We learned about leadership in the Torah – and goats and sheep – at Ne’ot Kedumim. We had a tour of the green building at TAEQ and learned about their important work. Plus an intentional community of ba’alei teshuva in Ma’aleh, who argued persuasively for the positive bridge-building role that ba’alei teshuva are having in Israeli society. And then a Druze community. And Barta’a. And Father Fadi, a Palestinian Anglican priest, who modeled for us why the Christian community here is so important, even as it struggles in so many ways. And the work of Leket (which we learned about, happily, while picking two tons of beets in under 90 minutes, to go to people who are food insecure.) And Orit Farkash-Hacohen, who successfully challenged Israel’s national gas monopoly, and Rabbi Mishael Zion from Mandel. And a beautiful musical Lag B’Omer with Rabbi Ruth Gan Kagan and musicians from Nava Tehila.

This morning we met with Aharon Ariel Lavi, who runs Hazon’s Hakhel program. Tomorrow we have a Shabbat retreat with Netanel Goldberg in Mitzpe Ramon, and stargazing, and meeting students from our main partner in Israel, the Arava Institute for Environmental Studies.

So I come away from this trip, again, inspired. And clear about three things in particular:

So on this joyous day of Lag B’Omer I shall end with two inspirational quotes, from Noor and from Shaul.

Noor: “Being on one side of this conflict isn’t helping us. So being ‘pro-Palestine’ alone – that won’t help us reach an agreed solution. People deserve equal rights and freedom, and we have to figure out how to get that without impinging on the other…”

Shaul: “In talking about the conflict we’re dealing with trauma therapy. Israel can’t ‘win.’ Palestine can’t ‘win.’ If we think that, there’s no way out. We need to bring nuance into the conversation. And we need to learn from Hillel – put Shammai’s opinion first…”

As we move towards Shavuot, (and as Muslims around the world start to get ready for Ramadan, which starts four days earlier), may we be blessed to live in peace, to be curious, to be inspired, and to use our freedoms wisely.

P.S. As I write (in other news) Israel is gearing up for the Big Start, which kicks off the Giro d’Italia tomorrow. I trust that will inspire our Israel Riders as they move into the summer training season. 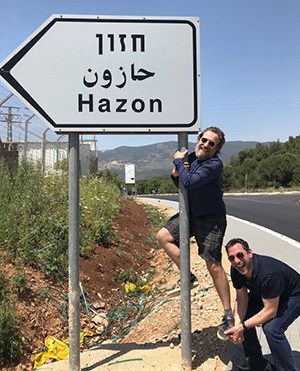