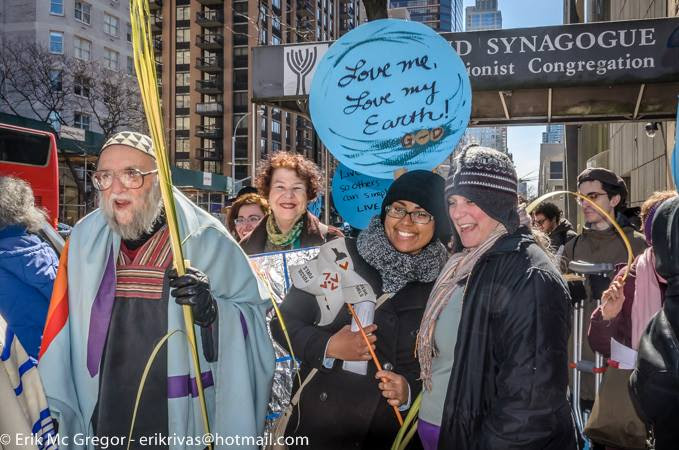 For in this coming April there is an unusual confluence of holydays — Jewish (Passover, starting April 15), Christian (Holy Week, starting April 10) , and Muslim (Ramadan, starting April 2). And in the hearts if not the formal religious calendars of many people of faith are two other April dates: April 4 – the death-anniversary of Dr. Martin Luther King and the date of his “Beyond Vietnam” speech a year earlier, in which he named racism, militarism, and materialism the dangerous triplets afflicting America –- and April 22, Earth Day. In April, here in the United States we will be in the thick of primary elections.

Faith communities in nonviolent action can lift the need to save Earth and Humanity beyond partisan politics not with “moderation” but with prophetic boldness. We can do it not just in Washington DC but everywhere there is a church, synagogue, mosque, temple, meeting-house.

Some climate—concerned organizations are preaching that it’s “Right now or never ever.” In trying to mobilize the US government to take a bold step before the Glasgow world-wide climate conference, they run the risk of turning frustration into despair. Instead, we propose to turn frustration into much stronger, broader, deeper action.

Organize nonviolent actions across faiths that advocate for climate action during the month of April. We do not mean that we abandon our sacred practices and symbols and ceremonies to take this action. No – we deepen them, we transform them.

– We might turn Palm Sunday back into what it was in the beginning — the nonviolent march to face the puppet government of the Empire.
– We might deepen the fasts of Ramadan and of Lent and of the Jewish avoidance of swollen chametz (leavening) into boycotting the products that burn our people and our Earth.
– We might take a third-day Passover Seder into the streets, waving the Matzah and the Bitter Herb outside or inside the branches of the Chase Bank that is the #1 investor in destroying Earth, our common home. “Move Our Money – Protect Our Planet” becomes our slogan.
– We might shape the Quaker silence into silent marches against death to the campaign offices of candidates for Congress from every party– silent till we shout the name of an elder killed by heat stroke, a child dying of famine, a family drowned in a flood that invades their own home.

And so forth, on dates carefully chosen during April to highlight and share the sacred practices of many different religious and spiritual communities.

How you can help:

Reach out to fellow-congregant who’s a go-getter, clergyperson, spiritual leader, or an activist nun. Share the idea of multi-sacred April with them.

And then ask them over for coffee and cookies. Talk about it. What could you-all do on April 4? On the third day of Passover? For Palm Sunday? For the fast days of Ramadan?

Let us know what you think. Write us at the Shalom Center.