Parsha Vayechi tells a story of transition and change. Jacob, lying on his deathbed, calls his sons to his side. Each of his sons, along with Joseph’s sons Ephraim and Menasheh, receive an individual blessing– and some punishments for bad behavior. The blessings recall each person’s individual talents, and lay the groundwork for the creation of the Twelve Tribes.
This is not the first time that brothers have gathered around to be blessed, and, compared to other biblical siblings, Vayechi shows an admirable model of coexistence. Earlier in the Torah, difference between siblings has led to warfare- Cain committing the first murder of his brother, Abel; Isaac receiving a blessing while Ishmael is thrown from his home; Jacob stealing the birthright from his twin, Esav. Even this story started with Joseph being sold into slavery, his coat stolen, betrayed by his brothers.

But upon Jacob’s death, a different tone emerges about brotherly love. For the first time, difference is made into a positive- twelve tribes with twelve different blessings, destined to fulfill the role of priests, schoolteachers, olive-growers, etc. 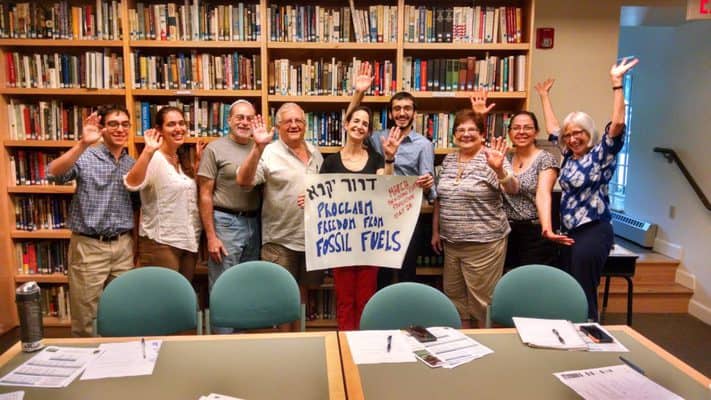 Like the story of strength through difference told in Vayechi, I am inspired by the ways that the burgeoning world of JOFEE works together. As a Jewish community dedicated to sustainability, we identify our different strengths and the ways that we can work as a network.  I support the Hazon Seal of Sustainability as part of my JOFEE placement at Hazon’s New York office. In the Hazon Seal’s pilot year, two dozen sites from around the country took a food, facilities, or ecosystem audit, convened a Green Team, and commit to three projects that make lasting change in their organization. Organizations have built chicken coops, educated students on composting and recycling, upgraded their light bulbs to LEDs,  led bike repair workshops, created ethical food policies, and more.

The Hazon Seal’s theory of change follows an arc of education, action, and advocacy. First we learn about an issue- like the importance of green forms of transportation. Then we’ll take action, by riding a bike or taking public transportation instead of driving. After those actions, we are inspired to advocate for change by become involved with campaigns for protected bike lanes and calling our local representatives.

The twenty-four Seal sites work on different projects and in different communities. Our cohort of JOFEE fellows, all seventeen of us scattered across the country, also have different strengths to contribute to our host sites. Individually, we run programs, bring kids into the woods, and educate the people that we touch. But collectively, working together, we’re able to impact lives in all ways- education, action, advocacy. I love working on the Hazon Seal because I get to see how each site’s separate programming in their communities builds on one another, how we are all building better community in the ways that we are best suited.

Rachel is an educator, dialogue facilitator, and nature lover living in Brooklyn. She comes to Hazon and JOFEE from Resetting the Table, where she worked to open conversation  about Israel across difference on college campuses. She has worked on a community farm, lived in an environmental co-op, and planted gardens on her fire escape to bridge her passions for building community and being around fresh-grown vegetables. Rachel is a former Emerson National Hunger Fellow and has a Bachelor of Arts in cultural anthropology and environmental studies from the University of Vermont.