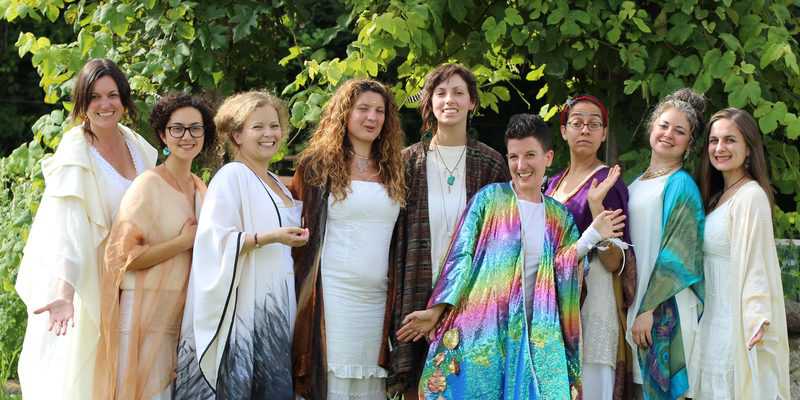 Graduating Class of 2015 Serve As Jewish Ritual Leaders and Educators

On Friday, July 24, 2015, the Kohenet Hebrew Priestess Institute gave smicha, ordination, to nine women at a ceremony at the Isabella Freedman Jewish Retreat Center in Falls Village, Connecticut. The nine new Kohanot, Hebrew Priestesses, constitute the fourth graduating class since Kohenet started 10 years ago. Under the guidance of Kohenet co-founders Rabbi Jill Hammer, PhD and Taya Shere, they have been trained as ritual leaders in an earth-based, embodied, feminist Jewish paradigm that honors the history of women’s spiritual practices and the sacred feminine. They are from three countries: the US, England and Ireland.

The Kohenet certification empowers and enables new graduates to continue building on the work they are doing, in positions such as a congregational rabbi in Colorado, a youth educator at Eden Village Camp in New York, and a founding resident of Moishe House in London, England. The graduating class has published articles, books, and poetry, created Judaica artwork, and facilitated workshops on midwifery, gender inclusivity, earth-based ritual, storytelling, and strategic planning. They are activists for human rights, for dialogue and understanding, and for ecological sustainability. Kohenet graduates will lead communities in prayer, conduct marriages, funerals, baby namings, house blessings, and many other ceremonies.

This year at the smicha ceremony, for the first time, the Kohenet Institute granted honorary titles to three scholars and ritualists who have been pioneers in Jewish women’s leadership: feminist scholar and author Rabbi Leah Novick, ritualist and composer Rabbi Rayzel Raphael, and renowned author Maggie Anton.

“The Kohenet Institute is an utterly new, yet ancient, movement, drawing on stories of women of the Bible and Talmud as well as ancient, medieval, and modern ritual practices to create a Jewish experience that is transformative, reverent, and inclusive,” said Rabbi Jill Hammer, cofounder of Kohenet, and the Director of Spiritual Education at the Academy for Jewish Religion.

The nine newly ordained Kohanot are:

Full bios for the newly ordained Kohanot are available here.

Since Kohenet began in 2006, the institute has ordained 40 Hebrew priestesses. During the ordination week, Hammer and Shere published The Hebrew Priestess: Ancient and New Visions of Jewish Women’s Spiritual Leadership (Ben Yehuda Press, 2015). The Hebrew Priestess rediscovers the women in the Bible and Talmud that rabbinic editors downplayed and perhaps even tried to erase, from Miriam the Prophetess to Deborah the Judge. The book also chronicles the sacred practices of contemporary Kohenet students. Hammer and Shere have also published Siddur haKohanot: A Hebrew Priestess Prayerbook in multiple editions. Kohenet has been part of Jewish and interfaith conferences in Washington, D.C.; London, England; and elsewhere and Kohenet-style prayer services have been led all over this country and in Toronto, Dublin, Istanbul and Jerusalem.

Kohenet is an educational organization that runs concurrent training programs on the East and West Coast that facilitate the creation of transformative Jewish ritual that is embodied, earth-based, feminist and inspired by traditions of women’s spiritual leadership from ancient Israelite sources, Jewish texts and folklore, kabbalah and contemporary creativity.

Three Gifts from Jewish Tradition
Hazon in the Bay Area…