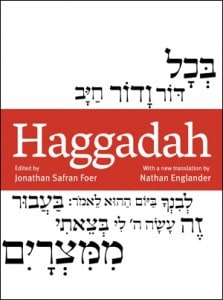 Critically acclaimed bestselling writer Jonathan Safran Foer presents a provocative new way of experiencing one of our oldest, most sacred texts. With a new translation from renowned author Nathan Englander, breathtaking illustrations by Israeli typographic artist Oded Ezer, and interpretive essays and commentary from some of the brightest Jewish literary and intellectual voices today (Jeffrey Goldberg, Lemony Snicket, Rebecca Newberger Goldstein, and Nathaniel Deutsch). Jonathan Safran Foer is one of the most acclaimed young writers of his generation. His books have received numerous awards, including a National Jewish Book Award and a Guardian First Book Award, and have been translated into thirty-six languages. Nathan Englander is the author of the new collection What We Talk About When We Talk About Anne Frank as well as the internationally bestselling story collection For the Relief of Unbearable Urges and the novel The Ministry of Special Cases. Englander, whose work has been translated into more than a dozen languages, was selected as one of “20 Writers for the 21st Century” by The New Yorker.

Join B’nai Jeshurun as they host Jonathan and Nathan for a presentation of this new/old book. Registration encouraged.