If one can speak of a tipping point for the Jewish environmental movement, and for Hazon’s work, these last four weeks have surely crystallized it – an absolutely extraordinary series of events. I challenge you to read to the end of this email and not be astonished at quite how much has happened in the last four weeks – and how good it is, and how inspirational, and how much hope it creates for the future.

November 2nd – 4th: Windsor Conference. For the first time the UN and representatives of the world’s religions together endorsed calls for significant transformational change over the next seven years. The Jewish delegation included Rabbis Jeremy Gordon, Michael Melchior, Zalman Schachter-Shalomi and Yedidya Sinclair, and we spoke alongside – amongst others – the Grand Mufti of Egypt, the Bishop of London, the Secretary-General of the World Council of Churches, the President of the African Council of Churches, etc. As at all conferences part of what was significant was the unscheduled meetings and conversations. One of those was a roundtable convened by Naomi Tsur, part of the Jewish delegation and deputy mayor of Jerusalem, for representatives of pilgrimage cities, to look at shared issues: how do pilgrims and tourists interact; what’s the environmental impact of pilgrimage; how can pilgrim cities establish a strong environmental message? From that meeting arose an agreement to establish a network of pilgrimage cities – including representatives from Amritsar, Haifa, Medina and Rome, as well as Jerusalem itself. As in so many parts of the environmental movement, a shared commitment to sustainability is also a wonderful way to build unique relationships. 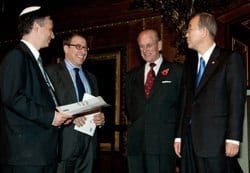 (Ehud Waldoks Zion wrote a great piece in the Jerusalem Post about the conference  – “A Magic Moment in Jewish History” ) There’s a lovely photo of me and Yedidya talking with HRH Prince Philip and UN Sec-Gen Ban Ki-moon but it is not true that we asked them to make a year-end donation to Hazon. Though people are making year-end donations to support this work, and if you’d like to join them that would be a great mitzvah – please click here to do so.)

November 7th: URJ & Hazon / the Jewish Food Movement. Rabbi Eric Yoffie, President of the Union for Reform Judaism, in his central address at the URJ’s Biennial, called for the Reform movement to address food policy in its institutions, to reduce the amount of meat that’s eaten, and in the deepest sense to start a serious conversation about what it means to eat ethically in the 21st century. Hazon and the URJ together published a special edition of Food For Thought, our sourcebook on Jews, Food and Contemporary Life.  (There are now special discounts for members of the Reform movement to attend Hazon’s food conference, to buy copies of Food For Thought, and to join the Jewish Food Education Network – click on these links for info and for Rabbi Yoffie’s sermon.)

November 8th: Nili Simhai receives a Covenant Award. The Covenant Foundation gave one of their three awards to Nili Simhai. It’s the most significant annual award in Jewish life, and quite proper recognition for the extraordinary work that Teva does and that Nili leads.

November 8th: J-REC Conference in San Francisco. At the same time Nili was getting her award, Hazon’s new Bay Area Director Lom Friedman, together with Yosef Abramowitz, the founder of Arava Power and another of our Windsor delegates, both spoke at AJC’s J-REC Conference in San Francisco. This conference was broadcasted live in NYC, where Liore Milgrom-Elcott taught to the group that gathered there.  AJC has steadily played a key role in encouraging the United States to consume less oil, and J-REC is an important step forwards.

November 4th – 9th: Arava Institute Hazon Israel Ride. – I couldn’t be at the Biennial or the Covenant awards because I went from Windsor to our 9th Israel Ride. We’ve now taken over 700 people to Israel in the last six years, we’ve raised well-over $1m for the Arava Institute for Environmental Studies and, more critically, one can now see the human impact – a flourishing campus in Israel, extraordinary friendships and close working relationships between Israeli Jews, Israeli Palestinians, Palestinians and Jordanians, and a growing number of Ride alumni across the US who have become significant ambassadors for the work of the Israeli environmental movement.

November 11th:  UK Secretary of State for Energy & Climate Change kicks-off the new Big Green Jewish Website in the UK, in front of 320 people. We’ve steadily worked in small-scale ways to seek to support, encourage and network people involved in the Jewish environmental movement in the UK. The Big Green Jewish website is a superb new resource, not just for people in the UK, and if you haven’t seen it yet, you should have a look. We’re contributing some of the content and intend to contribute more in the future. We met with UK Jewish leaders in April and again in early November and we’re happy that the Pears Foundation is funding a small group to come to Hazon’s food conference from the UK. Coming up in 2010 – hopefully the first British Adamahnik.

November 15th – Our first ever Israel Food Tour kicked off. Working with the Heschel Center for Environmental Leadership, and funded by the Nathan Cummings Foundation,  we were planning to take 10 American Jewish food activists to meet their peers in Israel. The subsidies were pretty small – yet in the end we had more than 70 people apply, and we decided to take 15, then 20 and finally 27 of them (farmers, writers, chefs, a Senate staffer, food justice campaigners, meat activists, someone who’s creating an Israeli olive oil CSA). It was an extraordinary group of people and a fascinating and phenomenal schedule – I was mortified that I had to come back to NY and could only join them the first day.

Yesterday and today (Nov 19th & 20th): The first-ever Israel Sustainable Food Conference – produced by the Arava Institute and the Heschel Center, and modeled on and inspired by Hazon’s Food Conference, attracted more than 500 people to this first conference!! And first reports are that it was “wildly successful.”  I’m incredibly proud that our work led to this Conference. Our own Food Conference is pretty amazing itself, and having grown in three years from 158 people to 560, we’re expecting close to 700 this year – now far and away the largest gathering focused on health and sustainability in the American Jewish community.  Yet I truly believe that the new Israel Sustainable Food Conference will actually be a bigger deal than anything we’re doing ourselves in this country. Israel is a sovereign state, and whilst we’re now demonstrably having an impact in transforming Jewish life in this country, I think the Israel Sustainable Food Conference, within five years, will clearly be shifting food policy in Israel in important ways. “Food policy” sounds bland. But in practice, that means reducing food insecurity; addressing issues of health and nutrition; defending the rights of workers in restaurants and food facilities; improving the treatment of animals and the quality of the soil; reducing harmful emissions – these are not minor issues.

Today & this weekend – The first Adamah Teva Reunion. I’m writing this email on the train to Isabella Freedman. There’s been an Adamah reunion for several years, but this is the first-ever Teva reunion and the first joint Adamah-Teva reunion. I might be the only person going who’s not in a formal sense an alum of either program. Yet in practice, I wouldn’t be who I am, and Hazon could not do what it does, without the support and inspiration provided by people like Nili, Adam Berman, Anna Hanau, Alexandra Kuperman, and many many others. We’re proud of the support we’ve offered to Teva since 2000, and to Adamah since inception, yet I truly believe that what we have offered is minor relative to what they give back in so many ways. I wanted to be here for two reasons: first, simply to thank the Adamahniks and Tevaniks for being who they are and doing what they do; and secondly because I really believe that this reunion is itself a historically significant event. Thirty years from now we’ll look around and see that the American Jewish community has been transformed, and is being led, by Adamahniks and Tevaniks, and the process of connecting, networking and supporting these people is incredibly important and necessary.

Today and the next five weeks: The Topsy Turvy Bus Tour!! Happily parked at Freedman is the amazing topsy turvy bus, with Captain Jonathan Dubinsky and his incredible crew. Over the next five weeks they’re driving across the country, fuelled by used veggie oil and the idea that together we really can make a difference. They’re promoting the Jewish Climate Campaign, and inviting synagogues, schools and Jewish institutions to set up Green Teams and commit to start a process of change – one that, by September 2015, will (IMHO) have genuinely transformed what it means to be Jewish in America. Go to the website to see us kick off the bus tour at the UN – or to book it for your communities. It’s going to Atlanta, Houston, Dallas, LA and San Francisco, amongst other places.

So: what can I say? We’re now in the month of Kislev, a time of light in the darkness and, in America, a time of gratitude and thanks-giving. It’s been a momentous four weeks. Hazon is touching people’s lives in powerful ways, both directly and indirectly, and I’m incredibly proud to have been able to participate in so much of this work. So many of you reading this have supported this work: thank you.

And – yes – it’s the end of the year, and we have at least $60,000 we need to raise in the next six weeks. If you feel able to make a donation to support what we do, please click here.

PS: “four weeks and six years?” Four weeks is the last four weeks. Six years is from now till September 2015 – the end of the next shmitta (sabbatical) year in Jewish life. The last four weeks is an end and a beginning. I think it’s the culmination of nine years’ of Hazon’s work, and more than a decade of this phase of the Jewish environmental movement overall. And it’s the start of the next six years – the move truly to transform Jewish life, so that by September 2015 we really are creating healthy and sustainable communities, and a healthier and more sustainable world for all.

2009 Fall Israel Ride: Reports from the Field
A Bishop, an Imam and a Jew Walk into a Room