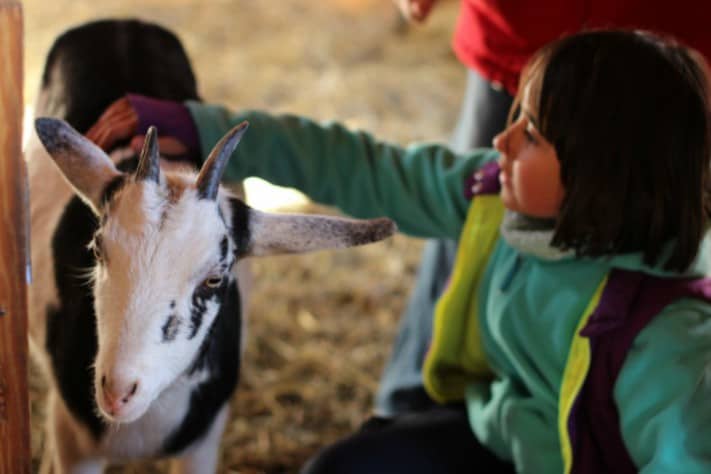 We play with them. We love them. Some of us eat them. Animals are a part of our lives, and preventing unnecessary cruelty to animals, or tzaar baalei chayim, is a core value in Judaism. What does our tradition tell us about how we should relate to animals, and what does that mean for our actions today?

Jewish tradition offers powerful resources that allow us to reflect on eating animal products today. But we have to apply that knowledge to a farming system that is vastly different from biblical and Talmudic times. There are many authentically Jewish ways to approach eating animal products.

What is the problem?

According to the Food and Agriculture Organization of the United States (FAO), 56 billion animals (not including fish) are slaughtered globally each year in the meat, dairy, and egg industries. Most of these animals are raised in conventional, industrial agriculture systems known as factory farms or, less commonly, concentrated animal feeding operations (CAFOS). While these systems are designed to maximize productivity and profit for the producer, they create serious welfare problems for animals. Learn more about the lives of conventionally raised animals used to produce fish, beef, dairy, poultry, and eggs.

What about kosher animal products?

Frustratingly, the overwhelming majority of kosher animals are raised in the same factory farm conditions in which most other farmed animals are raised. A kosher certification does not typically mean that animals were spared standard inhumane practices; for example, the caging of egg-laying hens, the inhumane handling of cattle in transport and before slaughter, or the use of hybrid chicken and turkey genetics that cause extremely fast growth causing animals to suffer from unusual diseases and experience pain when walking. Even worse, it is harder to locate higher welfare kosher food because the most reliable animal welfare certification programs presently will only certify operations that stun animals pre-slaughter, and contemporary kosher authorities have typically disallowed this stunning. The good news is that until welfare certifications are more available on kosher meats, ethical kosher meat retailers have stepped in to provide us information about how animals are raised, and plant-based meat analogues available in almost every grocery store are typically certified kosher.

This section adapted from the Hazon Food Guide 2016. For further information, check out the Jewish Initiative for Animals.

What does Judaism have to say about animal welfare?

As Jews, we’ve inherited a tradition that has numerous beautiful insights about animal life and, from the time of the ancient rabbis, Jewish law has offered detailed advice on how to treat farmed animals ethically. Judaism contains rich and diverse traditions about how we should relate to animals. Even though some texts may seem to point in opposite directions, one thing is clear: our texts express deep concern about treating animals with respect. Learn about some Jewish sources on animal welfare.

A core Jewish value is tzaar baalei chayim (literally, “[do not cause unnecessary] suffering to living beings”). As Jews, the Torah mitzvah and moral imperative of tzaar baalei chayim calls upon us to provide animals with thoughtful care and protection that attends to both their physical and mental well being, whether on the level of the individual, or on the level of a whole group or species.

Unfortunately, modern methods of factory farming animals have changed the world of farming so much that it is hard to know how to apply past wisdom. Agriculture has changed more in the last century than in the last millennium. In the past, the greatest welfare problems were at the time of slaughter; now the greatest welfare problems are on the farm, where kosher law has little to say.

This leaves all of us with an exciting task: perhaps like no other generation, we have the opportunity to rethink what it means to treat farmed animals ethically!

Tzaar baalei chayim commands Jews to show compassion for animals. But dairy, meat (beef, poultry, and fish), and eggs are a core part of many of our diets. What’s a Jew to do? Explore the following options to discover ways you can start eating responsibly.

Reducetarians commit to eating less meat – red meat, poultry, and seafood – as well as less dairy and fewer eggs, regardless of the degree or motivation. This concept is appealing because not everyone is willing or able to follow an “all-or-nothing” diet. However, reducetarianism is still inclusive of vegans, vegetarians, and anyone else who reduces the amount of animal products in their diet. Visit here for more information on the benefits of reducetarianism.

While incorporating more plant-based options into your diet, you can still support farming models that cause less suffering to animals. A plant-based diet is the easiest way to avoid factory farmed animal products, but if you choose to eat meat, purchasing higher welfare products is a great way to help grow a more humane farming system. Use our guide to kosher shopping to find certifications and companies that provide higher welfare meat, eggs, and dairy.

Get involved and advocate for the better treatment of animals!

Food purchasing always reflects a budget, but does it also reflect your Jewish community’s values? The Jewish Initiative for Animals (JIFA) is helping Jewish leaders design ethical food purchasing policies that reflect their institution’s values. JIFA’s approach combines the study of Jewish texts, the latest science, and reflection on community values to create policies that honor the Jewish commitment to compassion towards animals. Sign up here and JIFA will keep you posted on new programs and resources.

Do you want to take your organization’s commitment to animal welfare to the next level? Join Hazon’s Seal of Sustainability.

See for Ourselves – and Buy Welfare-Certified

By visiting the farms that raise and slaughter the animals we eat, we can see for ourselves how they are raised. Unfortunately, visiting animal farms and slaughterhouses is not nearly as easy as seeing crop production. Often farms and slaughter plants are located far away, and, even if they were next door, the overwhelming majority of animal farms do not allow visits. The good news is that we do have a way to “see” how animals are treated on farms through higher-welfare certifications or buying from retailers that enforce their own welfare standards (more info below). And, in any case, unless you have considerable expertise in animal husbandry, a certification is usually a faster and more accurate way to find out about welfare than attempting a farm field trip. Another important window into the everyday life of animals on industrial farms comes from the work of undercover investigations by groups like the Humane Society of the United States (HSUS) — just google and see what you find.

Billions of farmed animals live and die under cruel, unhealthy, and unsustainable factory farm conditions. Secrecy is what makes this system possible, but hundreds of undercover investigations are slowly helping to end it. That is why the agribusiness lobby is trying to pass ag-gag: anti-free speech laws that would jail anyone who makes an unauthorized recording on a farm. Sign this petition and join Farm Forward in taking a stand to protect consumer rights to knowledge, not corporate rights to secrecy.

Provide plant-based meat alternatives to show people high welfare options are available and delicious.  If children are present, shape the food like animals to make the dinner more interactive.  During the meal, hold a guided discussion regarding the connection of Jewish values to animal welfare.  Share your concern for animal welfare with your friends and family!

Promote animal welfare in your community using these lesson plans and activities.

The Bodies That Guard Our Secrets – New York Times

Cutting Down on the Meat, but Not the Taste – New York Times

The Carbon Footprint of 5 Diets Compared – Shrink That Footprint

Why There’s Less Red Meat on Many American Plates – NPR

Beef or Chicken? A look at U.S. Meat Trends in the Last Century – Freakonomics

HSUS Report: the Welfare of Cows in the Dairy Industry

HSUS Report: the Welfare of Animals in the Veal Industry

The Future of Kosher Meat in 24 Courses – Alix Wall

What Does Angus Johnson Know about Kosher Farming – Hadas Margulies

I Grew Up on a Factory Farm – Yadidya Greenberg

Eleanor Boyle – Why and How to Eat Less Meat

Peter Singer – The Way We Eat

Sustainable – A film about the challenges of making farming truly sustainable.

The Woman Who Thinks Like a Cow – A BBC documentary about animal welfare expert Temple Grandin.

Farmageddon – A film about individuals’ rights to access food of their choice and farmers’ rights to produce these foods.

A Vegan Cholent for Next Shabbat – Forward

Vegan Recipes for Every Meal, Every Occasion – Jewish Vegetarians of North America

Vegan and Jewish Recipes – This Is Arq

Resources for Eating a Plant-Based Diet

Aspire to eat less meat? Learn about the Reducetarian Movement.

Take the Jewish Veg Pledge get resources, recipes, tips , and soon the the first-ever Jewish-themed Starter Guide from JewishVeg

Plant-based cooking for beginners: Tips, tricks and easy recipes to get you started

6 Simple Ways to Be the Healthiest Vegan Ever