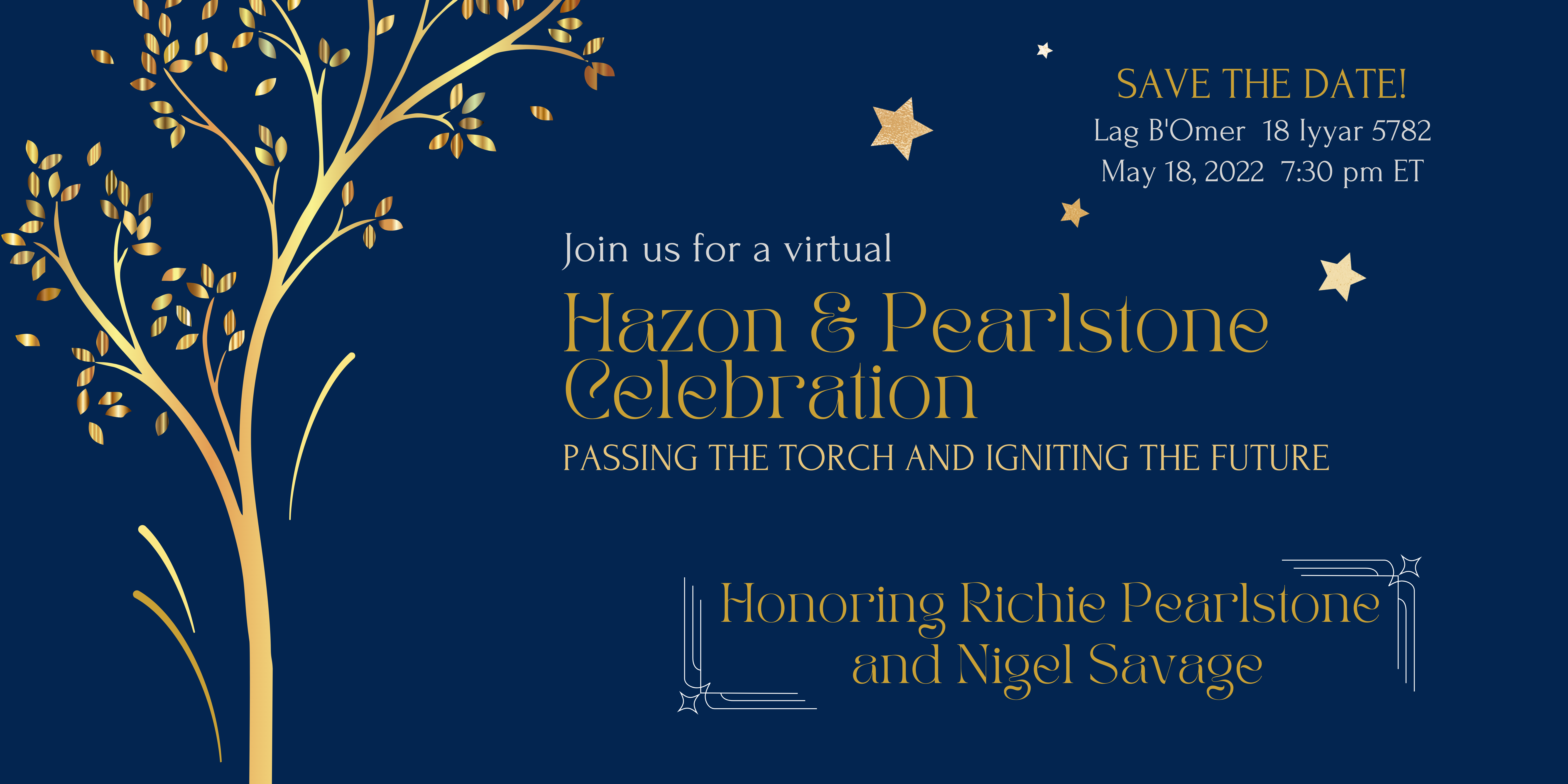 for a virtual benefit!

Hazon & Pearlstone Celebration
Passing the Torch and Igniting the Future

WHY WE ARE CELEBRATING!

Join us to celebrate the histories of Pearlstone and Hazon, as we springboard into our shared future. We will be honoring Richie Pearlstone, the visionary founder of Pearlstone Center, and Nigel Savage, who founded Hazon in 2000 and served as CEO until August 2021.

Richard (Richie) Pearlstone (with The Associated) founded The Jack Pearlstone Institute for Living Judaism in memory of his father, Jack Pearlstone, in 1982. After nearly 20 years of connecting people to Judaism, the physical space known as Pearlstone was born.

Richard (Richie) Pearlstone is Chairman and CEO of the Pearlstone Group. He currently sits on the Boards of the Institute for Jewish and Community Research and of CLAL: The National Jewish Center for Learning and Leadership. In the past, he served as Chairman of the Budget and Finance Committee and is a member of the Executive. A past President of the United Jewish Appeal (UJA), he served as its National Chairman and National Vice Chairman. A member of The Jewish Agency’s Board of Governors from 1993, he is Honorary Board Member since 2011. Mr. Pearlstone is past Chair of the Board of Governors.

Nigel Savage founded Hazon, the Jewish lab for sustainability, in 2000. He served as its CEO for 21 years, stepping down in August 2021. Under his leadership, Hazon became the largest environmental organization in the American Jewish community.

Hazon was one of only two groups to have been in every single Slingshot guide, and was recognized by the Sierra Club as one of 50 leading faith-based environmental organizations.

Nigel has been a popular teacher and speaker in a wide range of venues.
In recognition for his work, in 2015 he was awarded an honorary doctorate by the Jewish Theological Seminary. He has twice been named a member of the Forward 50, the annual list of the 50 most influential Jewish people in the United States. He is a recipient of the Bernard Reisman Award, and has given Commencement speeches at Wagner (NYU, in 2011), at Hornstein (Brandeis, in 2014) and at Spertus (in Chicago, in 2018).

Before founding Hazon, Nigel worked in asset management in London for NM Rothschild and as co-head of UK Equities at Govett. He has an MA in History from Georgetown, and has learned at Pardes, Yakar, and the Hebrew University. He was a founder of Limmud NY.

Nigel executive produced the British independent movies Solitaire For 2 and Stiff Upper Lips and had an acclaimed cameo appearance in the cult Anglo-Jewish comic movie, Leon The Pig Farmer. He is believed to be the first English Jew to have cycled across South Dakota on a recumbent bike.

This event is being co-chaired by Richard Dale and Josh Fidler, the founding board chairs of Hazon and Pearlstone, respectively.

Hazon, the largest faith-based environmental organization in the U.S., is leading a transformative movement weaving sustainability into the fabric of Jewish life, in order to create a healthier, more sustainable, and more equitable world for all.

Hazon and Pearlstone: Jewish Inspiration. Sustainable Communities.  Global Impact.  Together, we are building a transformative global movement connecting people with the earth and with each other, and building vibrant, sustainable Jewish communities through immersive retreats, Jewish environmental education, and climate action.  By 2030, we will inspire over 100,000 people each year through immersive transformative experiences and mobilize over 1,500 Jewish organizations to cut their greenhouse gas emissions in half, helping to build a healthier, more sustainable, and more equitable world for all.