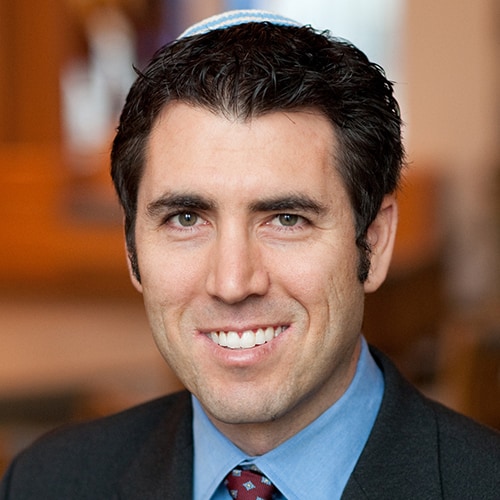 Rabbi Ratner oversees JLens advocacy in the corporate and investment arena on social, environmental, and Israel-related concerns. He previously served as the director of the Jewish Community Relations Council in Connecticut, the Associate Rabbi at Yale University, and the Rabbi at Congregation Kol Ami in Cheshire, CT, from 2012-2014. Ordained by the Jewish Theological Seminary in May 2012, he was a Joseph Neubauer Fellow and also earned a Master’s Degree in Midrash and a Certificate in Pastoral Care. During rabbinical school, Josh worked as a Public Policy Fellow for the Rabbinical Assembly and as a Rabbinic Fellow for the Jewish Council for Public Affairs. He also received training in congregation-based community organizing, traveled to Mexico as part of an American Jewish World Service Rabbinical School Delegation, and was part of the original rabbinical student cohort of CLAL’s Rabbis Without Borders fellowship program. Josh was an attorney for five years prior to entering rabbinical school. Rabbi Ratner believes that Judaism offers unique language and wisdom for addressing environmental stewardship and food justice. He has been inspired by Hazon’s successes, particularly with its food conferences, CSAs, and Shmita consciousness-raising, and looks forward to helping Hazon continue to play a leading role in articulating a compelling vision for Jewish sustainability and immersive experience. Josh is married to Dr. Elena Ratner and they are the proud parents of Dimitri, Eli, Gabby and Sasha.

New Haven, CT
« Back to All Staff