P.S. Interested in being or hosting a JOFEE Fellow? Applications for prospective fellows will continue to be reviewed as positions are available.

In this week’s Torah portion, Vayeishev, we find Jacob and his family settled in the land of Canaan.  After Rachel’s death, her firstborn son, Yoseph quickly becomes his father’s favorite and is given his famous Technicolor Dream-Coat.  The special treatment he receives from Jacob incites Yoseph’s brothers’ jealously which is only exacerbated by the retelling of dreams in which he is portrayed as ruling over them.

While tending their father’s flocks, the sons of Jacob plot to kill their brother Yoseph, but the eldest, Reuven, implores them to throw him in a ditch instead.  They take Reuven’s advice only to realize a more sinister plan.  Yoseph is soon stripped of his beautiful coat and sold as a slave to an Ishmaelite caravan headed to Egypt.  They dip the coat in the blood of an animal and show it to their father saying that his beloved Yoseph has been eaten by a wild beast.

Meanwhile, in Egypt, Yoseph is made to work in the house of one of pharaoh’s officials by the name of Potifar.  He is put in charge of the entire estate and because he is so handsome and successful, he attracts the eye of Potifar’s wife.  After refusing her advances, Yoseph is thrown in jail where he interprets the dreams of a baker and a butler and is then left alone.

This is where the torah leaves us.

At the winter solstice, when the days are their shortest and at the dark of the month, when the holy moon seems missing from the night sky, the Torah leaves off with Yoseph trapped in the darkness of a jail cell in Egypt. But Yoseph’s darkness is only a precursor, only the beginning of the defining darkness of the Jewish people.  We are often referred to as the “chosen people” or the “light onto the nations” and though this is a problematic identity for many of us, there is a lot to be learned from it.  I once heard that the only way we, as a nation, could become this light for the world is by going through the darkness of being slaves in Egypt.  We had to experience the pain, the degradation and the general lowliness of slavery so that we might have the genuine understanding to sympathize with the plight of others and become their allies.   And so, it was in the darkness of Egypt that we were able to become the light.

In a piece written for the Times of Israel, entitled “Ba’nu choshekh l’kadesh: Savoring Darkness, Seeding the Light” Rabbi David Seidenberg writes:  “This is the darkness in which the seed begins to grow and the baby starts to form, in which mycorrhizal fungi weave together with plant and tree root to nurture each other. Darkness is the Earth, that brings growth and sustenance to all.” As modern Jews and further as modern Jewish farmers and JOFEE fellows, we are beckoned to honor this darkness.   When we tuck our seeds into the dark solitude of soil we know that the same darkness that transformed our ancestors into a light will bring the shattering transformation of the seed into something new.

This fall at Pushing the Envelope Farm we had several groups from local synagogues come out and help us plant garlic for the coming season.  Garlic is special because it gets planted in mid-fall, spends the cold, dark night of winter underground and then pops up for new growth in the spring.  Each garlic-planting is a tangible lesson on the transformative power of darkness.  The cloves are separated and buried alive only to emerge from that solitary grave green, fresh and new.  For many of us, this feels like dark times but this season begs us to ask what newness is being nurtured by the holy womb of creation and consciousness. 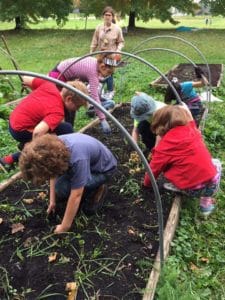 participants from a local synagogue prep a bed for planting

At either solstice, our tradition honors the relationship between the light and the darkness and beckons us to do the same.  It is only by recognizing the importance of this relationship that we are able to realize that now is the time to sow new seeds of light in our lives.  Channukah comes at the darkest moment of the year and we honor it as the Festival of Light.  It is a ripe time for us to realize that this season is as much a celebration of light as it is a celebration of the darkness from which that light emerges.

On Chanukah we remember two distinct miracles; one of might and one of light.  The former is the miracle of the Maccabees winning out over our oppressors; the few beat the many and the weak triumphed over the strong.  The later is the miracle of the small bit of oil, found in the rubble, which Hashem made to last for eight days.  These two feats, one political and one spiritual seem to be at odds with one another, vying to be the main attraction of this holiday.  Chanukah gives us two distinct pathways for lighting up the night; the path of the Maccabee, of physical power and outward action and the path of the Rabbi, of spiritual power and inward action.  As JOFEE fellows and Jewish farmers we are able to do both; we wield our shovels high and we dig deep into the holiest work of both light and might.  The blending of the spiritual and the physical in the work I do, allows me to feel like the Jewish earth warrior I was born to be.

Shani Mink is a recent graduate of St. Mary’s College of Maryland with a degree in philosophy and environmental studies. She was first introduced to the world of Hazon and JOFEE education at Eden Village where she worked as a farm educator. Shani has been working in agriculture for four years, including management of her campus community garden, completion of a Permaculture design course, and participation in the ADAMAH fellowship.