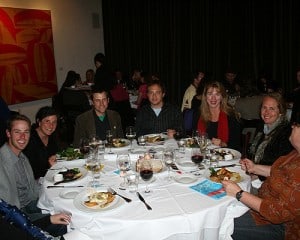 Charoset from Around the World

Moroccan Jews settled in Morocco, located near the northern tip of Africa that is closest to Spain, after the destruction of the Temple in 70 CE. The Jewish population in Morocco has been a vibrant and active population, but after the founding of the State of Israel, many of the 265,000 Moroccan Jews emigrated to Israel and the United States. As of 2004, Morocco had a population of about 4,000 Jews; meanwhile Israel is home to nearly 1,000,000 Jews of Moroccan descent, around 15% of the nation’s total population.

Pit and chop dates, and chop figs. Then throw it all in the food processor and chop into a paste! Optional: roll charoset into little balls to serve.

Ashkenazi Jews trace their lineage back to the medieval Jewish communities of Eastern Europe, and their traditions have developed to be distinctly influenced (to varying degrees) by interaction with surrounding peoples, such as the Germans, Poles, Czechs, Slovaks, Kashubians, Hungarians, Ukrainians, Lithuanians, Latvians, Belarusians and Russians of contemporary Eastern Europe. Today, Ashkenazi Jews make up 80% of Jews worldwide, and 6 million of the 7 million Jews living in the United States.

Peel, core, and dice apples. Chop nuts (should be slightly smaller pieces than the apples). Add wine and cinnamon; adjust quantities to taste!

Israeli Jews either live in Israel or have had family in the Middle Eastern state since Israel’s founding in 1948. Currently, Jews account for 76.4% of the Israeli population, and many of them are recent immigrants. Between 1974 and 1979 nearly 227,258 immigrants arrived in Israel, about half being from the Soviet Union. This period also saw an increase in immigration to Israel from Western Europe, Latin America, and the United States. A trickle of immigrants from other communities has also arrived, including Indian Jews, Ethiopian Jews, and others.

Blend the fruits and nuts. Add wine. Add as much matzah meal as the mixture will take and still remain soft. Add cinnamon and sugar to taste. Mix well and chill before serving.

Yemenite Jews are those Jews who live or whose family has lived in Yemen, on the southern tip of the Arabian peninsula. The immigration of Jews into Yemen can be traced back to about the beginning of the second century CE, but between June 1949 and September 1950 almost the entire Jewish population left Yemen for Israel. Most Yemenite Jews now live in either Israel or the United States. Only a few remain in Yemen, and most of them are elderly.

Put raisins and dates in a bowl and cover with water. Let stand one hour. Add the sugar and whirl the mixture in a blender, a few spoonfuls at a time, or divide the mixture in thirds and place in a food processor. Transfer the chopped fruits to a heavy saucepan and let simmer over low heat until the fruits are cooked and the liquid is absorbed. It should take about 20 minutes. Remove from the heat and place in a jar.

Venetian Jews are those Jews who live in or are from Venice, a city in northern Italy. Many Jews visited and worked in Venice beginning in the 10th century CE; and at its peak time, around 1650, the Venetian Ghetto (where the Jews were forced to live) housed about 4,000 people. Before World War II there were still about 1,300 Jews in the Ghetto, but 289 were deported by the Nazis and only seven returned. Today, the Ghetto is still a center of Jewish life in Venice, with five synagogues, a yeshiva, and Judaica shops.

In the time leading up to Pesach , be mindful of what you buy. Try to finish those “almost empty” containers in your fridge, and half empty bags of bread, rather than automatically resorting to buying new. You can get rid of chametz in the most sustainable and cost effective way by planning ahead in order to use up as much as you can of what you have before the start of pesach.

Pesach is a time when many families break out the fine china and heirloom silverware. It is a good investment, cost effective, and a sustainable method to invest in a set of Pesach dishware, that way you do not need to buy disposables every year.  However, if you’re using disposable plates this year, use post-consumer waste paper or plant-based ones. For some great compostable disposable dishwear products, check out Leafware, Go Green in Stages, Let’s Go Green, and World Centric.

4 – Get Rid of Your Chametz – Sustainably

You don’t have to douse your house in poisonous chemicals—noxious to both you and the people who work in the factories that produce them—to get rid of your chametz (bread products and crumbs which are literally, and ritually, cleared before Pesach). Try using natural, non-toxic cleaning products, and scrub away. Eco-cleaning products that we like are Seventh Generation and Ecover.

5 – Buy Veggies at Your Farmers Market

Meat dishes like chicken soup with matzah balls and brisket are traditional favorites for Passover. Try buying your meat from the person who raised it (or as close to that as possible. Where to shop: farmers’ markets, meat order co-ops, local butcher shops (ask themwhere the meat comes from). If you’re looking for kosher organic meat, visit our page on kosher, sustainable meat for some great options!

6 – Every Charoset Tells a Story – Lean More about Charoset!

Charoset’s mixture of apples and nuts is already healthy and delicious and, when made with local apples, sustainable. Charoset also offers you the chance to explore other cultures within the Jewish Diaspora. Check out the Jew & the Carrot to find recipes from Russia, Spain, Holland, Yemen, Turkey, Surinam… – or ask your guests to bring their own favorite charoset recipe and have a taste-test. Check out this delicious Sephardic Charoset recipe!

7 – Sprout Your Own Karpas

If you can’t find locally grown greens to dip for karpas, sprout your own! Although many sprouts come from corn, soybeans, and other chametz or kitnyot, in just 2-3 days, you can have fresh, delicious quinoa sprouts that you “grew” yourself!

8 – Buy Fresh or Make Your Own Horseradish

Buy and grate fresh horseradish root for maror on your seder plate. When it comes time for the Hillel sandwich, hold up an ungrated root so your guests know where that bitter stuff comes from. Or learn how to make your own horseradish.

Buy organic, free-range eggs, and be willing to pay slightly more for them. They taste better, didn’t cause suffering to the animals who laid them, and support farmers who are making it possible for you to eat good food.

If you’re going vegetarian for your seder (see below), substitute a roasted beet for the roasted lamb shank. Or follow The Jew & The Carrot reader, Sarah Fenner’s suggestion: “In place of the shankbone in my home, we have often roasted a “pascal yam” instead!”

*Reminder: If you started a home-grown garden during Tu B’Shvat time, now is the time to dig into that garden and make use of your home grown veggies for your pesach seder!

Power of Bro: Second Screening
Win a spot in the 5 Boro Bike Tour