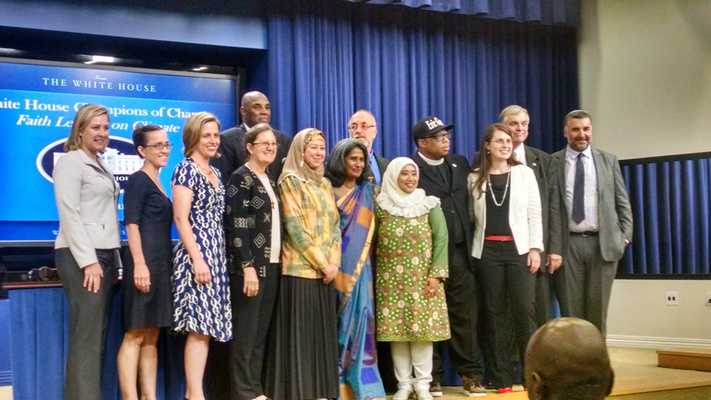 By Hazon on July 20, 2015 in Climate Change, Colorado, Press Release

Congratulations to Rabbi Marc Soloway, chair of Hazon’s Rabbinic Advisory Board, for being honored by the White House’s Champions of Change program!

THE WHITE HOUSE
Office of Communications
FOR IMMEDIATE RELEASE

WASHINGTON, DC – On Monday, July 20th, the White House will recognize twelve people of faith as “Champions of Change” for their efforts in protecting our environment and communities from the effects of climate change. These Champions have demonstrated clear leadership across the United States and around the world through their grassroots efforts to green their communities and educate others on the moral and social justice implications of climate change. The program will feature remarks by Environmental Protection Agency Administrator Gina McCarthy and Senior Advisor to the President Brian Deese.

Huda Alkaff is the Founder and Director of the Islamic Environmental Group of Wisconsin (Wisconsin Green Muslims), formed in 2005. She is an environmentalist with higher education degrees in conservation ecology, sustainable development, and environmental education from the University of Georgia, and has experience teaching environmental studies courses at the University of Wisconsin. Huda is a founding member and leader of the Interfaith Earth Network and Wisconsin Interfaith Power and Light. Huda also serves on the national Interfaith Power and Light Campaigns Committee, the national Greening Ramadan Task Force, and the Milwaukee Environmental Consortium Board of Directors.

Steven Beumer is an active member of St. John Evangelical Lutheran Church in Winter Park, Florida.  He has led St. John to make changes through new energy efficient roofing and LED lighting. He also organized a regular worship service in April dedicated to Earth Day.  Additionally, Beumer organized hands-on environmental projects such as labeling storm drains in the neighborhood to prevent trash from going into the lakes, and litter clean up on public streets near the church. Further, Beumer has worked with other faith communities to find their environmental footing within their own faith context.

Sister Joan Brown is a Franciscan Sister from the Rochester, Minnesota Franciscan Community and is the Executive Director of New Mexico Interfaith Power and Light (NMIPL). NMIPL works to educate and inspire faith communities and individuals; engage them in energy efficiency, renewable energy and local food; and works with people of faith to emphasize the moral implications of various public policy concerns at the local, state, and federal levels. Sister Joan has worked for decades in the areas of justice, peace, and integrity of creation in the southwest. She also works with the Partnership for Earth Spirituality, is an OXFAM Sister Ambassador on the Planet, serves on the national IPL board, and writes for various publications including as a monthly contributor to National Catholic Reporter’s Global Sister’s report.

Cassandra Carmichael is the Executive Director for the National Religious Partnership for the Environment, which is an alliance of four major faith groups: Jewish, Catholic, Evangelical and Protestant. Previously, she was the Washington office and eco-justice program director for the National Council of Churches where she implemented the environmental and justice ministries of NCC’s 37 member denominations, which represent 100,000 churches nationwide. Cassandra is a senior fellow in the Environmental Leadership Program, and a previous board member on the Chesapeake Bay Alliance.

Patrick Carolan has been the Executive Director of the Franciscan Action Network (FAN) for five years. He has made climate change a core issue at FAN, and has built relationships with other faith and secular organizations in that role. Patrick co-founded the Global Catholic Climate Movement (GCCM), a coalition of Catholic leaders and organizations from across the globe that have come together to raise awareness about the urgency of climate action in light of Catholic social and environmental teachings. Prior to coming to FAN, Patrick was involved in faith rooted social justice organizing. During the 1980’s and early 1990’s he served as a state employee union official, serving two terms as president. He and his wife Stella have been foster parents and have adopted two children in addition to having two children.

As the former Dean of Clark Atlanta University and the former director of the Health Promotion Resource Center of the Morehouse School of Medicine, Reverend Gerald Durley seeks to combine the disciplines of faith and science with the lessons learned as a civil rights advocate of the 1960’s. He believes that climate change, global warming, and environmental justice are moral imperatives and civil rights issues. He has worked with Interfaith Power and Light, the Sierra Club, Eco-America, U.S. Climate Action Network, the Environmental Working Group, Green Law, Ambassadors for Clean Air, Moms Clean Air Force, and Water Keeper Inc. Currently he is working to eradicate fluoride from toothpaste and drinking water and testifying before EPA on the clean power plan.

Nana Firman has been involved in developing urban community garden in Southern California and encouraging the American Muslim community to practice an eco-lifestyle, which has led her to become a member of the Green Mosque Initiative for Islamic Society of North America. Nana previously worked with the World Wildlife Fund in Indonesia for several years, directing their recovery efforts in the wake of natural disasters, and has also worked with Muslim leaders in Indonesia to create climate resiliency plans. Climate change is not just an environmental problem, but for the people of faith like her, it is also a moral and ethical issue that has already affected many vulnerable communities globally. She is currently coordinating Muslim outreach for OurVoices, a global faith and spiritual climate action network.

Rachel L. Lamb, is Chair of the Steering Committee for Young Evangelicals for Climate Action (Y.E.C.A.), and has served with the organization since its inception. Over the past three years, Y.E.C.A. has grown into an active national organization with members from a diverse array of church denominations. Under Rachel’s leadership, Y.E.C.A. has developed a successful Climate Leadership Fellows program that extends to college campuses throughout the United States and across international borders to the Christian Bilingual University of Congo in the eastern Democratic Republic of Congo. While studying at Wheaton College (IL), Rachel was the recipient of the EPA’s Greater Research Opportunities (GRO) Fellowship for Undergraduate Environmental Study. Through this Fellowship, Rachel worked with Tribes in Alaska and the Pacific Northwest to produce a collection of best practices for climate change adaptation in the region. In 2015, Rachel received her Master of Public Policy and Master of Science in Sustainable Development and Conservation Biology from the University of Maryland, College Park. Currently, Rachel also serves as an Assistant Professor at the Au Sable Institute of Environmental Studies in Michigan.

Reverend Kim Morrow is a religious environmental leader who is passionate about helping people respond to the environmental urgencies of our time in ways that are community-based, theologically motivated, and hopeful. She serves as Executive Director of Nebraska Interfaith Power & Light, a non-profit whose mission is to facilitate the faith community’s response to climate change. For the last five years, she has also served as Minister of Sustainability at First-Plymouth Church in Lincoln, and now serves as a climate change resource specialist at the School of Natural Resources at the University of Nebraska, Lincoln. Kim presents at churches regularly on the link between faith and climate change, and her work has fostered a host of programs including ecologically-themed worship services, conferences on faith and climate, and church farmer’s markets, She is ordained in the United Church of Christ and lives in Lincoln with her two daughters.

Rabbi Marc Soloway serves as the spiritual leader of Congregation Bonai Shalom in Boulder, Colorado and is president of Haver, Boulder’s Rabbinic Fellowship.  He chairs the Rabbinic Advisory Board for Hazon, a leading faith-based environmental organization in the United States and is also on the national board, and has co-chaired two national Jewish food conferences.  Marc also serves on the board of Ramah in the Rockies, a Jewish Outdoor Adventure camp, with a mission of sustainability.  In his Jewish community, Marc has been central to the creation of an interfaith Community Supported Agriculture (CSA) program and the development of community farming.  Marc’s synagogue was the first to be a zero waste facility, supports local food initiative with a mission to produce much of the food served, and powers its ner tamid (eternal light above the ark in the sanctuary) through a solar panel, as a symbol of sustainable spirituality. 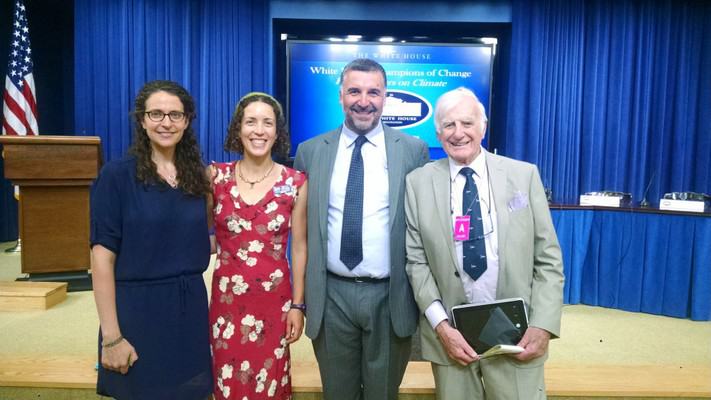 Reverend Lennox Yearwood Jr., President and CEO of the Hip Hop Caucus, is a Church of God in Christ Elder and community activist. The Hip Hop Caucus is a national non-profit and has been building support for the climate movement among cultural influencers and celebrities. This work led to the launch of People’s Climate Music and the first ever climate album called HOME (Heal Our Mother Earth). After Hurricane Katrina in 2005, Reverend Yearwood established the award winning Gulf Coast Renewal Campaign where he led a coalition of national and grassroots organizations to advocate for the rights of Katrina survivors.  A national leader within the green movement, Lennox has been successfully bridging the gap between communities of color and environmental issue advocacy for the past decade.

Sunita Viswanath has worked in women’s and human rights organizations for almost three decades. She is co-founder and active board member of the 14-year-old front-line women’s human rights organization, Women for Afghan Women.  Sunita is also co-founder and board member of Sadhana: Coalition of Progressive Hindus, living and building a Hinduism that prioritizes social justice, and upholding the Hindu principles of ekatva (oneness), ahimsa (non-violence) and sadhana (faith in action). Sunita is being honored for her work with Sadhana to encourage Hindus to live out these principles by taking care of the environment.