What a week of Tu B’Shvat it was! All over the country, Jews gathered in new and traditional ways to celebrate Tu B’Shvat.  Here are a few highlights from celebrations on the East and West Coasts.  If you did something great for Tu B’Shvat, tell us about it in the comments! 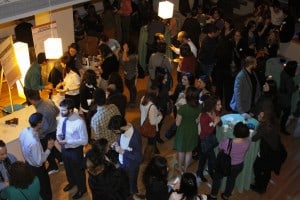 Over 200 people gathered in Brooklyn to party the night away at Pinot & Pomegranate: The Best Tu B’Shvat Party in NYC. Party-goers visited four stations and tasted delicious desserts from Adamah Foods and four different glasses of wine inspired by the four worlds of Tu B’Shvat.  They also were able to discuss the spiritual and environmental themes of the holiday through interactive activities at each of the four stations.  Participants came from across the spectrum of diversity in Jewish New York, including many from our partners in the Russian speaking and Israeli communities.

Over 200 people gathered for a gala event at the National Museum of American Jewish History to celebrate Tu B’Shvat and pay tribute to Mark & Judy Dornstreich, and Mark Aronchick, leaders in the Philadelphia Jewish community and pioneers of the sustainable farming movement.  The event was catered by James Beard Award Winning chef Michael Solomonov and Peachtree kosher, and featured courses inspired by the seven species of foods from Israel, including salmon in grape leaves with fennel and olives, and pumpkin olive oil cake with kumquats.

Co-sponsored by Urban Adamah and seated inside a large tent on the Urban Adamah farm, 60 people gathered to  celebrate Tu B’Shvat. We sang songs, told stories and imbibed drinks having to do with each of Israel’s shevah mineem, seven species. Instead of a Kabbalist’s Tu B’Shvat Seder, the Hazon/Urban Adamah Seder focused on the gratitude we feel for each of the seven species of the good land of Israel (All able to grow  in CA’s similar climate). Seven different people presented something about each of the species. There were “dirty martinis’ to be drunk for olives, beer for wheat and barley, wine for grapes…you get the idea!

But, lest you think it was all fun and alcohol, there were alternative non alcoholic beverages for each of the species, an organic local meal and much discussion on what we can do to trim the trend of environmental degradation.

Hands drenched in kiwi juice, apples dipped in organic maple syrup, wine flowing into glasses, song lifting a room decorated with sweet smelling pine branches – these are just a few of the sensations that participants at Isabella Freedman’s first annual “Tree B’Earthday” celebration experienced at Saturday night’s Tu B’Shvat Seder.  We learned how a pineapple really grows, meditated with a perfect slice of star fruit, and set intentions for the coming year in alignment with the trees. Our teachers were representatives from the many branches of the Jewish Environmental movement, as well as the Torah, Kabbalah, and Cat Stevens.

Miss the seder? Check out Hazon’s Tu B’Shvat hagaddah and Leader’s Guide to plan for next year!