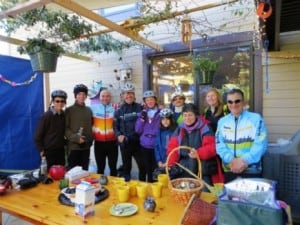 “This was the coolest!” enthused Jillene Moore of Loveland, when asked about her experience cycling the Sukkah Bike Hop. Marv Goldman of Denver summed up his biking experience, “The ride immeasurably added value to the holiday: being outdoors, exercising, chatting, and eating with not only fellow cyclists and Jews, but also having the hospitality of families along the way.”

Eighteen riders came together at the Chabad of NW Metro Denver in Westminster as the starting and ending spot for the three routes. Riders of all ages came from Boulder and across the Front Range, and from different Jewish backgrounds and cycling experiences.

Click here for more pictures from the 2012 Sukkah Bike Hop.

What If Farming Is Actually A Curse?
Power of Bro