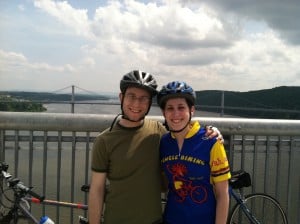 When someone comes on a Hazon ride for the first time, it usually turns out that it’s just the first of many rides they will join us for, and often returning with friends and family.  Maddy Yasner and Yossi Hoffman are a perfect example of how this happens.  Maddy’s family loves Hazon – her father, Michael Yasner, did the Hazon Arava Institute Israel Ride in 2008, and her mother, Val,  is Co-Chair of the Hazon CSA is South Jersey.  In 2010, Maddy, her sister, and both their parents decided to do the New York Ride together.  As part of their training over the summer, they rode Bike to the Beach, and convinced Yossi Hoffman, Maddy’s boyfriend, to come along.  Yossi hadn’t been on a bike in quite some time, and even though they did the shortest 15 mile route, he found it to be difficult and challenging.  After Bike to the Beach, he began to train with Maddy almost every weekend (renting a bike each time) and found that riding quickly got easier, and a lot more fun.  After Maddy experienced her first New York Ride, which she found to be very rewarding, she and Yossi were both set on training for and completing this year’s Ride together.  Yossi was so excited about the Ride that he even joined the planning committee, and is one of only two first-time riders on the committee.

Maddy and Yossi bike together every Sunday, and have found a creative way to fundraise together as well.  They sent an email out to their friends and family explaining a little bit about Hazon and the New York Ride, and introducing their guys-versus-gals competition. They asked all guys to donate to Yossi, and all gals to donate to Maddy, to see who can raise more money, and who can bring in the highest number of individual donations. Right now, the gals have the lead, but Yossi had a bit of a head start with fundraising before the competition got under way. In total, Maddy and Yossi each only have about $275 left to reach their goals.

Maddy and Yossi have enjoyed all their preparations for the Ride this far – they always have a lot of fun riding together on weekends, and even managed to turn fundraising into a game!  They’re both eagerly awaiting the New York Ride, both for the Shabbat retreat and the ride itself.  Maddy is  excited to face the physical challenge.  Yossi is very excited to Ride, but is also especially looking forward to the Shabbat retreat.  He explains, “It can be really incredible when you bring people with different perspectives and levels of observance together, and from what I’ve heard, the New York Ride Shabbat retreat does that very well.”

Maddy and Yossi will be joined by their families, the Yasners from Cherry Hill, NJ and the Hoffmans from White Plains for the Shabbat retreat.

Consider sponsoring a rider or making a donation!