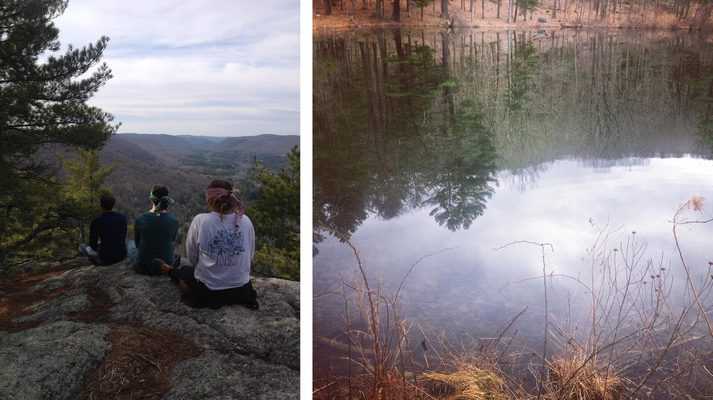 Josh Lichtman (Summer 2005) lives in New Orleans, has two young children, and is working on a Masters degree in urban planning.

Steve Sherman and Glenn Katz (’11-’13) are working at a dairy in Tuscany for the second half of the Shmita year.

Rachel Ackoff (Summer 2011) is working as a Senior Organizer at American Jewish World Service to mobilize the American Jewish community and other supporters of human rights to end violence against women and LGBT people globally.

(Rabbi) Adina Allen (Fall 2005), her husband Jeff Kasowitz and their little one Remy Ner are thrilled to have recently moved back to the Bay Area where they are launching a new Jewish learning and creative arts organization called The Jewish Studio Project.

Jacob Perlman (Summer 2006) is in a masters program for occupational therapy in Minneapolis.

Emma Stuhl (Fall 2011) is getting her masters at the University of Vermont’s Field Naturalist Program.

Julia Sheng (Fall 2007) plays roller derby for the Bay Area Derby Girls in Oakland, California, and in her spare time grows things to eat in her front yard.

Arielle Solomon (Fall 2014) is currently living on an eco-educational farm in Israel outside of Modi’in called Chava v’Adam!

Nadav Slovin (Summer 2012) is living in Israel studying Torah at Yeshivat Har Etzyon and learning to become a teacher!

Tadea Klein (Fall 2014) is working as the costume designer at Double Edge Theatre in Ashfield, MA, and looking for farm work in the area.

Jacob Siegel (Summer 2010) is studying for rabbinic ordination at Yeshivat Chovevei Torah Rabbinical School, in New York City. He is a certified shochet, and regularly offers demonstrations on Judaism, meat, and food ethics at congregations and communities around the country.

Monica Gomery (Fall 2010) is chugging along in rabbinical school, and learning a LOT.

Tova Markenson (Fall 2013) is wrapping up her first year of an PhD in Theatre at Northwestern, getting excited to study Yiddish this summer in Western Mass, and urban-homesteading with her beloved roomie and adamah alum, Amir Starr Weg.

Claire Diamond (Fall 2012) launched her tarot reading/healing business, Fertilize Your Heart, in Central Vermont! She and her bestie, Yael Werber (Fall 2012), love living in Plainfield, Vermont with their furry creatures.

Margot Seigle (Fall 2012) is a happy resident of 116 Johnson Rd where she helps to hold down programming at IF while bringing together the lefty jews, working towards transforming the economy, and making music in her spare time.

Ben Samuelson (Fall 2012)  just finished a year building a half acre teaching garden at the Virginia School for the Deaf and the Blind, supported by the Allegheny Mountain Institute.  He is now a location manager for the Amir Project farm site at Camp Herzl summer camp in Wisconsin.

Alex Lyon (Summer 2014) is on Domestic Exchange at The University Of Hawaii Hilo studying farming and eco-tourism, and is living with an urban permaculture community.

Adam Gillman (Fall 2013) is back in the Pacific Northwest and will be working in Pine Bluff, Arkansas this Summer with What’s Next Pine Bluff: an organization committed to youth empowerment, skill building and the success of students in Pine Bluff.

Heather Schoen (Summer 2005) is currently living in Boulder, Colorado and working in Denver as a nutritionist for the Colorado Department of Education’s Office of School Nutrition.

Bess Beller-Levesque (Spring 2012) lives in Somerville, MA and works for an environmental nonprofit called Toxics Action Center in Boston. She’s involved in the Boston Jewish social justice world and recently joined the alumni board of JOIN for Justice, the Jewish Organizing Fellowship.

Liron Kranzler-Feldman (Summer 2006) lives in israel with her husband eliyah, and they have two sweet boys, Netz (4) and Gal (1).  She works as a Dance Movement Therapist and teaches a technique called Authentic Movement.

Mel Rivkin (Fall 2012) is currently a Masa Israel Teaching Fellow teaching English in Ashdod, Israel. Mel will also be attending the University of Michigan for the Jewish Communal Leadership Program in the Fall!

Josh Karbelnig (Fall 2008) is teaching at an elementary day school in Los Angeles and working as a Jewish camp administrator during summers.

Beth Myre (Summer 2009) is managing the Veggie Box program at Farm Fresh Rhode Island. Veggie Box is a subscription program which delivers boxes of local fruits and vegetables to 50+ workplaces and community centers. In 2014, Veggie Box purchased almost a quarter of a million dollars of food from local farms!

Noah Goldstein (Summer 2007) serves life by cultivating health and vitality, nurturing creativity, and promoting peace and integrated wholeness. He does this as a husband, father, community member, acupuncturist and herbalist, and avid gardner/homesteader/beekeeper/backyard chicken raiser in Boulder, CO.

Becca Weaver (Fall 2006) is working as the Farm and Sustainability Director at the Boulder JCC, helping the community start a two acre educational farm. She also runs Rise and Shine Farm, specializing in organic cut flowers.

Batsheva Glatt (Spring 2013) is helping out with a session of Spring Teva! This summer, she will be working as an educator with Kansas City Community Gardens.