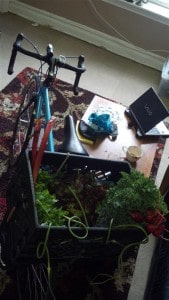 CSA Fact #382: veggies taste better when picked up by bike.

Last Saturday, I strapped a milk crate to my bicycle and rode down the street, half a mile downhill to Brooklyn’s East 4th Street Community Garden to pick up my first ever CSA share. On my way back, I felt like one of the silhouettes from the back of the red Hazon shirt, complete with long rhubarb stalks and garlic scapes dangling like flags from the basket behind me.

CSA season is an exciting challenge. Aside from the scary, initial upfront cost, my first pickup presented another, even scarier thought: what am I going to do with all these new veggies? Kale? Tasty chips. Not a problem. Arugula, I think I understand: salad. I’ll find something to do even with the garlic scapes and broccoli rabe. But rhubarb? My sister and I were inclined to try fencing with our two stalks, but the internet says to treat it as a fruit and make it into pie. It’s a weird consolation, as if to say, “No, we don’t know what to do with that either.”

Turns out, pancake mix doubles as muffin mix, and CSA strawberries mix great with the rhubarb and some brown sugar. So, while I now know the size and season for strawberries, I still don’t know what to do with all the veggies I’ll have coming from this small farm in Eastern Long Island. But, thanks to our newsletter, a few blogs some neighbors have shared, and a bit of Googling, this summer is already promising to have me cooking up magical deliciousness while snacking on fresh snap peas.

Edward Angert is the Office Assistant at Hazon and Makom Hadash. Edward was Brooklyn born and Long Island raised. He earned his Professional Communications degree from Farmingdale State College and previously worked as a tech at Westbury Library, an usher at Jones Beach Theater, and a barista at Starbucks.

Portland Tuv Ha’Aretz Presents: Why Should You Care About the Farm Bill?
Know Your Farmer, Know Your Food Compass 2.0!