By Hazon on February 6, 2020 in Newsletters, Reflections, Tu B’Shvat

Not one, but four times over the course of the year we are called upon to mark a new year, a rosh hashanah. Of these four new years in the Mishnah (Rosh Hashanah 1:1), it is taught that the 15th of Shvat (Tu B’Shvat) is the new year for the trees. Only one rosh hashanah became popularized as the Rosh Hashanah, when we reflect on our actions, pray for the wellness of the year, and perform teshuva.

When the Temple service in Jerusalem ceased, the other three new years effectively went dormant for about 1500 years. The holy kabbalists under the leadership of Rabbi Isaac Luria (1534-1572) created a new Tu B’Shvat tradition with the multi-sensory seder we experience today.

Humanity and Trees in the Jewish Tradition
Though Tu B’Shvat was paused, trees continued to grow both in reality and on the pages of Jewish texts. In Jewish tradition, a relationship was formed between trees and humanity in the first week (see Gen. 2:9) and it still exists today. In fact, later in the Torah, we are reminded that it is forbidden to cut down a tree during times of war (Deut. 20:19). The Rabbis explain it is because trees sustain us, offering their fruits and their oxygen. Not only should we not destroy trees, but because they can’t protect themselves (from humans) we have a moral and religious responsibility not to harm them.

The Talmud takes note of humanity’s distinct relationship to trees, both for our own sake, such when we say the blessings before eating fruit (Talmud Bavli, Brachot 35a) and for generations to come. Knowing that trees have the ability to give and sustain life, the rabbis see Torah through the metaphor of “the Tree of Life.” In a sense, trees also embody legacy, what you hold on to, and what you leave behind. Honi the Circlemaker says, in a story in the Talmud: “When I was born into this world, I found many carob trees planted by my ancestors. Just as they planted trees for me, I am planting trees for my children and grandchildren” (Talmud Bavli, Ta’anit 23a).

From the start of Jewish history, trees and humans have been custodians to one another. What happens when that relationship falters?

Earth Day, JTree, and Tu B’Shvat in the 21st Century
This year celebrates the 50th anniversary of Earth Day (April 22, 2020), a day dedicated around the world for people to publicly display support for preserving the ecosystems of our environment. In a way, Tu B’Shvat is the Jewish Earth Day, so let’s show up for both!

We have killed trees to build cities and skyscrapers and to produce meat and dairy farms. We have killed trees for the benefit of a small number of people, at the cost and destruction of planet Earth, our habitat, our home. Science tells us that one of the great ways to mitigate and even help reverse climate change is reforestation.

As we begin this decade and consider what the ’20s will look like for humanity, we are met with unprecedented challenges. Despite this, we have never been better positioned for success, gifted with resources and opportunities that would have been considered miracles just one hundred years ago. That is why we, the Jewish community, are mobilizing JTree this Tu B’Shvat. JTree is calling upon us to not only consider the role humanity has played in destroying ecosystems of tree life, but also to actively engage in this campaign to plant millions of trees and heal our planet. 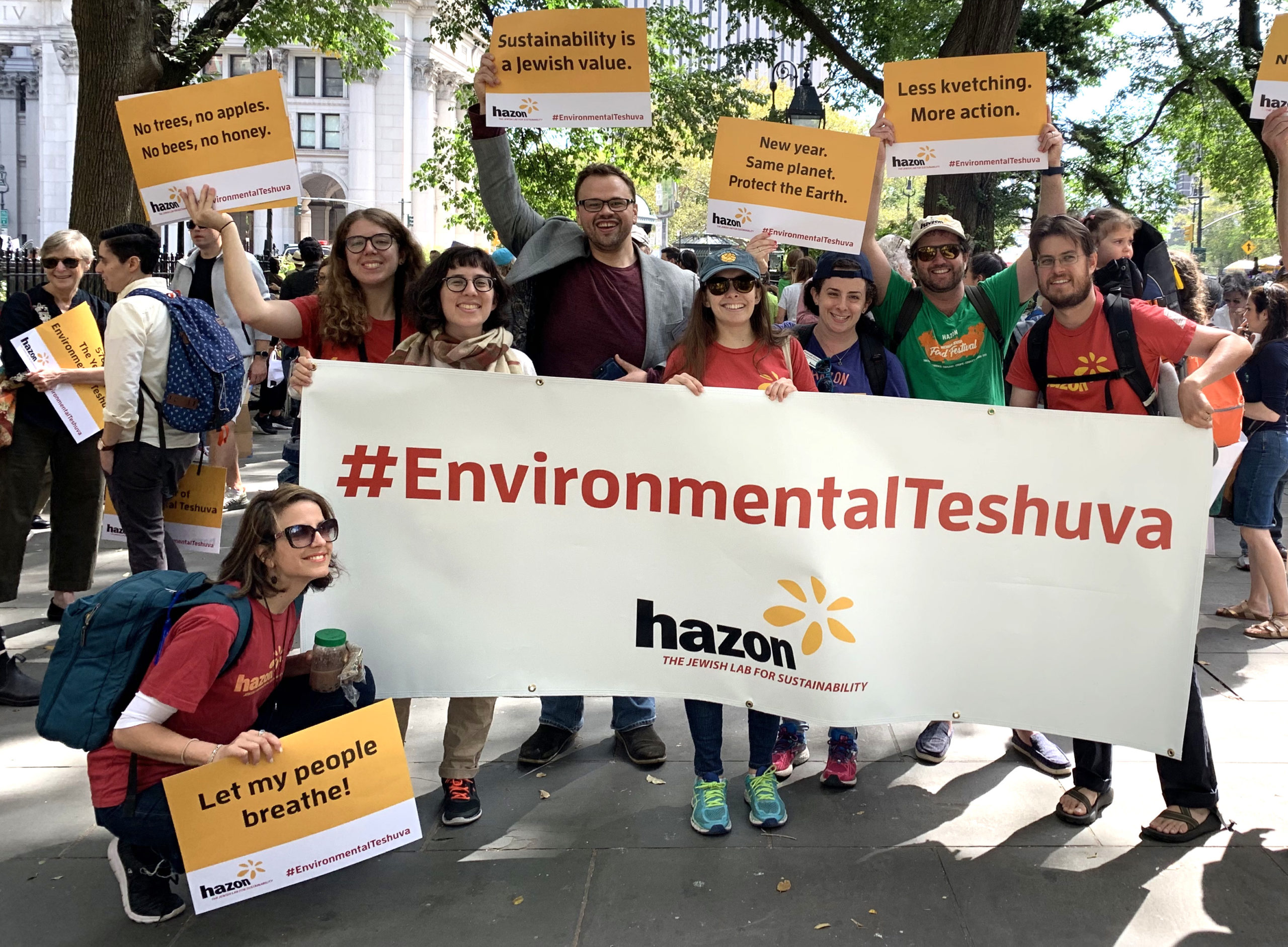 5780: The Year of Environmental Teshuva
Hazon declared 5780 the year of Environmental Teshuva. Tu B’Shvat is a time for us to consider our habits and commitments so we can, as a nation and as citizens of this planet, mitigate climate change. Just as Rosh Hashanah is a time of ritual celebration and of personal reflection around our choices, so too, Tu B’Shvat is a time for ritual celebration and personal reflection around humanity’s stewardship of trees. Just as Rosh Hashanah and the secular New Year remind us of how important our biggest and smallest choices truly are, so too we must take action on Tu B’Shvat for the trees. Not just on one Rosh Hashanah, but on each of them.

May Tu B’Shvat ignite within us a humbling excitement about the majesty of the natural world, and humanity’s eternal responsibility to steward it.

Celebrating Hazon Seal Regional Cohorts
The Torah of the Trees